I mentioned this briefly the week I bought it, but I figured I might as well review it while I’m taking the time to mention the last few manga digests I read. It’s the work of Akira Toriyama, best known for a little creation of his called Dragon Ball, and it’s an easily digestible one-volume adventure about a half-vampire/half-werekoala kid named Paifu.

After a few shorter stories introducing us to Paifu and the other colorful characters who live in his little village of monsters—including his shape-changing best friend Jose Rodriguez, rival Arpon and a disgraced human sumo wrestler—the book shifts focus into a road-trip adventure. Much of the town has come down with a deadly monster flu, and its up to this quartet to journey far away, through the big city and a haunted woods and up a tall mountain to get the cure.

Whether because this was earlier in his career or because this was intended for a younger audience, Toiryama’s art is a lot more simplified than his later Dragon Ball output or even his Dr. Slump, although it’s clearly the work of the same man. The story reminded me quite a bit of the original, pre-tournament Dragon Ball stories, when Goku was still just a little kid and the book was more of a comedy adventure then it was a fight comic. Toriyama touches like anthropomorphic animals living among humans, weird-shaped houses, cute vehicle designs and well-choreographed, over-the-top action scenes abound; there’s even some character design resonance between some of Cowa’s stars and Dragon Ball characters.

I’d recommend checking out Matthew J. Brady’s review of it; he’s the one who alerted me to this book’s existence, and he has some scans of the art over there.

No, I don’t have any idea why this is called what it’s called. 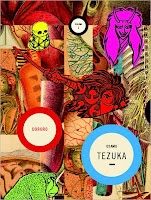 In synopsis, this one sounds weird, even compared to that last book, which starred a half-vampire/half-werekoala. In feudal Japan, a wicked lord promises 48 pieces of his unborn son to a host of demons if they’ll grant him power. They comply, and his son is born as what looks a little like a large, fat worm with a skull on one end (that’s him as a baby in yellow on the cover to the right). He’s sent floating down the river in a basket, where a kindly old doctor finds him and cares for him, building him a mostly artificial body (with hidden swords for arms). Thanks to psychic senses and telepathy, the boy, who grows up to be Hyakkimaru, can function normally, despite a lack of body parts.

He goes on a quest to wander Japan, slaying demons, and each one he kills restores one of this body parts to him.

This is just part of the story. The title character is a sneaky, ill-tempered little orphan kid that befriends Hyakkimaru and joins him on his journey, which, by volume two, becomes more about Dororo’s heritage and a lost treasure than it has to do with Hyakkimaru’s search for his body parts.

This is the work of Osamu Tezuka, and while it’s not his best work, it’s still the work of Osamu Tezuka, which means it’s better than about 90% of the other stuff you’ll find in your local comic shop. The peculiarities of the particular premise aside, I found myself reminded of Rumiko Takeshi’s early Inu-Yasha volumes, in which the colorful heroes wandered feudal Japan getting into episodic battles with a variety of demons.

Tezuka’s demon designs are top-notch, and regardless of the strengths and weaknesses of the rest of the narrative, awesome monster abound.

This series is being packaged and published by Vertical, who have done a pretty stellar job with all of the Tezuaka work they’ve been putting out the past few years, and this is no exception. I love the collage-like covers and spines of these book s, which are nice enough to probably be well worth a purchase just to spruce up your book shelf, whether you read them or not. But you should read them. Because they’re about a guy with a prosthehic body and swords for arms wandering feudal Japan and fighting alien moth women and armies of ghost foxes to earn his body parts, and it’s by Tezuka.

I held off as long as I could. It was my understanding that this was going to be the last volume of Kiyohiko Azuma’s darling and hilarious slice-of-life stories about a precocious little girl, her good-humored single father, and the neighbors they pester for the foreseeable future.

Having heard this repeatedly online, I held off on buying this volume, so that I would know that I still had at least one more volume of Youstuba to look forward to. My plan was to wait until a sixth volume was at least announced, but then I read Christopher Butcher’s recent-ish post about the manga market in 2009, and I finally caved. According to Buther, more Yotsuba is somewhat inevitable, but there’s no indication on when it might get here.

If you’ve read any of the first four volumes of this series, one of the most delightful comics I’ve ever read, then you know exactly what to expect from this particular volume. It’s just as good as the previous ones, and in the exact same ways. In fact, this might be a little bit better than the last few, in large part because the longer the amount of time you spend with Yotsuba, the better you get to know her, and thus the more endearing her antics become.

In this volume, she meets Cardbo the cardboard robot who isn’t really a robot but Shh! Don’t tell Yotsuba or you’ll break her heart, she meets a young friend of her father’s who becomes her mortal enemy, she goes star-gazing, runs errands and goes to the beach. Er, none of which might not sound like the plot of a particularly hilarious comic book, but Azuma’s characters are so sharply realized and their behavior so sharply communicated that day-to-day activities become thrilling comic adventures.
Posted by Caleb at 6:51 PM

I've been avoiding everything manga-like that didn't involve samurai bunnies for awhile now. But I kept seeing all these positive reviews for Yotsuba@, so I broke down and bought the 1st. One of the best comics purchases I've made. Plus they make great gifts for younger relatives...

Cowa is definitely post-Dragonball.
Toriyama's first editor from his Dr. Slump days was brought back as EIC to try to shore up sagging sales of the Shonen Jump magazine (way down after the mega-popular Dragonball and Slam Dunk both ended their runs) and managed to coax Toriyama out of retirement to do some short features.
Pretty sure Cowa is derived from the Japanese "Kowa(i)" 怖い
which means "Scary"

This is a great description. I really didn't enjoy Dororo that much, but we're talking about a work by the guy who created Buddha and Phoenix easily two of the best comic stories, east or west, ever.

So it's low on the scale of Tezuka achievements, but still well above all the same old Naruto/Bleach/Spider-man/Superman shlock.

"I broke down and bought the 1st. One of the best comics purchases I've made."

Yeah, I seriously doubted Yotsuba would be everything people make it out to be . . . until I read it and became a believer. I even went out and bought the posable action figure.

Thanks for the info, Kuri!

Actually, I thought Dororo was on par with some of Tezuka's best work. I was immediately drawn in to the story, and found the characters, both main ones and supporting ones, to be very appealing. I also liked how it was episodic, but also developed a central storyline. Anyway, I'm sure we can all agree that Vertical is the best thing to happen to comics in the last few years.