Daredevil #2 (Marvel Entertainment) Well, I can’t say this one is quite as new-reader friendly as the first issue, as it references both the recent past of Daredevil (Was he really possessed by a devil during that “Shadowland” business? Like an actual demon from hell devil…?) and is made up in large part by a battle between the title character and Dardevil over…something I didn’t really understand, that ended with a resolution I also didn’t really understand.

That said, Mark Waid’s scripting is fine despite these few headscratching moments, and the art is superb, and remains the major selling point. If the Cap and Daredevil brawl seemed a little out of nowhere, it was still fun to see two heroes famous for jumping around and throwing blunt objects at people mixing it up, and doing so while making bank shots with one antoher’s weapons. And there was a pretty neat depiction of a minor if old-school Marvel villain, one that doesn’t seem like the sort that would normally fight Daredevil, but his presence here kind of makes sense.

I like the cover the more I look at it.

At first blush, it didn't look anywhere near as imaginative as the cover for the previous issue, in which onamatoepoeia words were sculpted into the shape of Daredevils New York City rooftop setting to suggest the way he might "see" it with his radar sense, but the more I look at this one, the more graceful little details emerge.

I like, for example, the fact that the two combatants both hit one another in the head hard enough to rip their respective cowls, and locks of their hair can be seen through the rips: 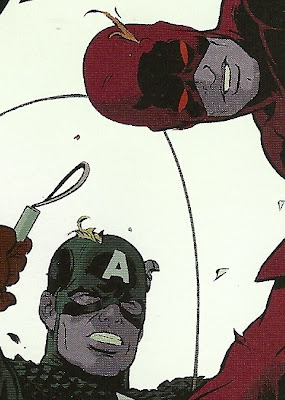 And I especially like the fact that DD totally took off one of Cap's "ears" in the fight: 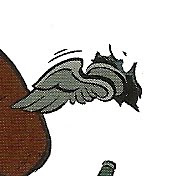 DC Retroactive: Batman—The ‘90s #1 (DC Comics) I feel like I’ve already spent more than enough time discussing this particular comic and the work of its creators Alan Grant and Norm Breyfgole this week, so I’ll keep it short.

In the lead story, The Ventriloquist is released from jail pending an appeal, and he sets a trap for Batman. Complicating both characters’ plans is the freak resurrection of a dead mobster, looking for revenge against those that killed him. There’s another sub-plot tossed in as well, and all of them naturally intertwine during the climax.

The issue is fairly full of little nods to the Grant/Breyfogle run on the Bat-books, but beyond the Easter eggs, it’s a nice distillation of the attributes of the comics they used to produce on a monthly basis.

The back-up reprint is 1990’s Detective Comics #613, a story entitled “Trash” in which Batman gets involved in a criminal organization’s muscling in on a garbage route. Their victim’s son is working on a school project about trash.

The new story echoes this one in a couple of ways, most prominently in the ending, in which an innocent is imperiled right before Batman’s eyes.

One story ends hopefully, the other tragically.

Let’s not keep Grant and Breyfogle a nostalgia act now, huh DC? It was awfully refreshing see a one-issue Batman story with easy-to-read, well-orchestrated action scenes after some of the awful, awful Batman art I’ve read in the course of the last few years.


Tiny Titans #43 (DC) News of DC’s September realunch/reboot has finally made it to the gang at Sidekick Elementary, as is apparent from the opening gag of this issue: 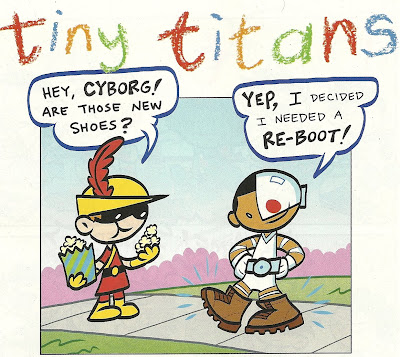 The quest for new costumes then consumes the rest of the issue, with the Robin and Superboy attempting to appropriate Superman and Batman costumes in order to form their own brand-new Justice League.

At the risk of spoiling the ending, Miss Martian finds them all new costumes: 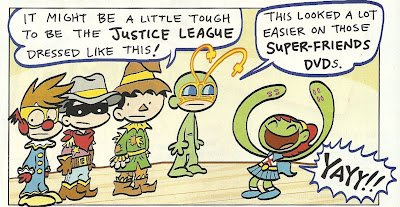 Now those are some radical, daring costume redesigns. And, it should go without saying, I like ‘em a whole lot better than the full-sized Titans’ new costumes.

Yes, Daredevil was possessed by a demon in Shadowland. No, you don't want any more details than that.

Tiny titans has been my favorite dc title for a long time.