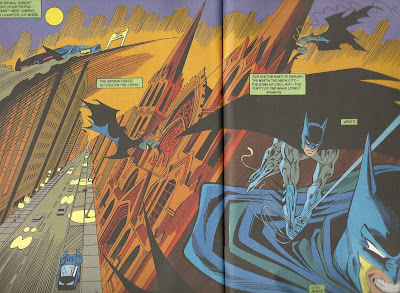 I have a long-ish essay about the Alan Grant/Norm Breyfogle creative team up at Robot 6, an evaluation occasioned by the release of DC Retroactive: Batman—The '90s #1, one of the first original comics projects I've ever read catered particularly to my nostalgia for other comic books. I sort of wish I spent a few more hours spelunking through my comics midden in order to find panels to scan to illustrate some of my paragraphs, as there's so much text, but one can only spend so many hours a day blogging about comics.

The above image is a spread from the reprint of 1990's Batman #613, in which Breyfogle uses multiple images of Batman driving, climbing and swinging around a cathedral to suggest the Dark Knight in motion.
Posted by Caleb at 12:41 PM