Judy Horacek's The Story of Growl isn't a comic book, but I won't hold that against it 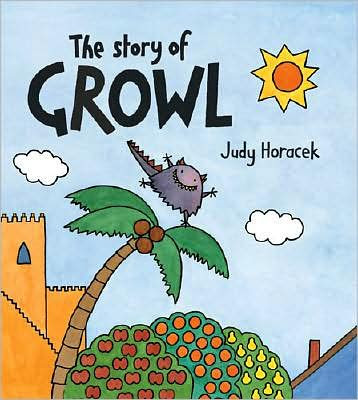 I don't know if Growl's parents named her Growl when she was first born, and the appellation determined her intense love of growling, or if it was a sort of nickname she picked up later, after having demonstrated her proficiency at growling.

However the little purple monster got the name, its an apt one. The star of Judy Horacek's The Story of Growl (Kane/Miller; 2008) loves to growl, moreso than any of the other fun monster activities she gets up to in her castle at the end of Eucalyptus Drive (a castle that looks more like a big, vaguely Mediterranean villa or mansion with a few steeples and towers; it looks like the sort of castle-esque house that little kid might call a castle, even if it doesn't fit the actual definition of a castle. 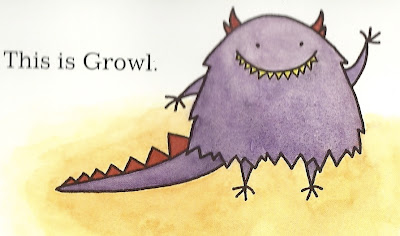 She growls "the whole day, right up until bedtime," the narration tells us, while Horacek's super-simple, flat illustrations consisting of what look like only pen and watercolor show us the Growl—shaped like a bit like an open umbrella, with monster signifiers like horns sharp teeth and a spiny tail—grwoling at the goldfish in the pond or while she brushes her teeth. 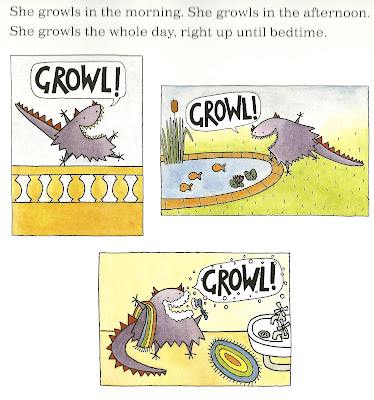 Her love of growling isn't shared, however, and one day she gets in trouble by growling at her neighbors, surprising and scaring them sufficiently to ruin their teatime. As a result, a huge policeman "made up a special rule" and erected a sign declaring Eucalpytus Drive a no growling zone. 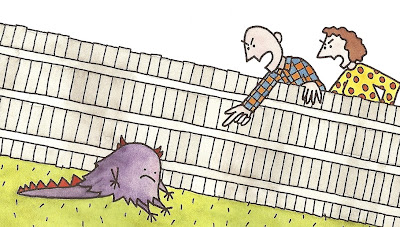 This made Growl "the saddest she'd ever been," and while seeing the happy little monster from the cover and early pages of the book reduced to a frowny face scrawled on a listless, droopy monster body, a body incapable of doing anything but lying down in various positions all day, not sleeping at night, and wandering around alone in a house, singing softly to her self "I don't know what to do..." didn't necessarily make me the saddest I've ever been, it still made me pretty sad to see a cute little monster apparently stricken with the life-crippling disease of depression. 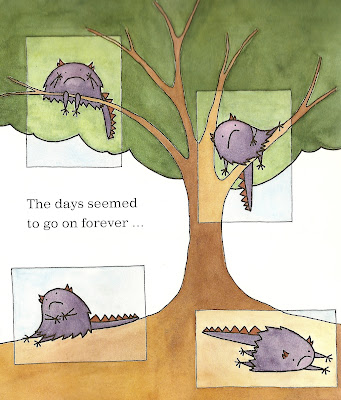 Luckily, Growl isn't really depressed-depressed, as, despite the familiar symptoms, she does have a pretty good reason for being blue (metaphorically blue; she's purple). And as luck would have it, she's able to demonstrate the use of a a well-timed, loud and scary growl to her neighbors, which solves both her problem and their problem which led to her problem in the first place.

That is, it ends happily for everyone, with the main characters all growing a bit and learning to understand one another better.

It's a really nice story, one that seems all the happier because Horacek was able to so devastatingly convey her lead character's moods through simply smiley and frowny faces that transformation from happy to depressed to ecstatic are drastic.

It's a very good argument for simplicity and abstraction. More detailed, realistic art could certainly convey intense emotions, but not as purely as Horacek's few lines did; a Growl with too many lines or body parts, a Growl with weight and gravity and three dimensions and shades and shadows would visually give off more complex emotions, where as a flat little sketch of a monster with smiley and frowny faces expresses pure happiness and pure sadness with palpable effect.

Horacek broke my heart about halfway through this book, so when the happy ending eventually comes, it was such a relief I let out a "Whew!"