I'm currently working my way through Real Monsters, Gruesome Critters, and Beasts from the Darkside (Visible Ink; 2011) by Brad Steiger and about 20 or so contributors, a big, thick book of stories about various "real" monsters.

There's a chapter entitled "Mothman—Harbinger of Death" about the Mothman, and there were two different illustrations of the subject.

There are a lot of illustrations in the book, and while I'm not terribly impressed with the visual elements of the book, I remain fascinated (to the point of obsessed, I guess) with the different ways different artists try to illustrate the highly abstracted creature, which was sighted scores of time, but which we still don't have a very clear "picture" of. 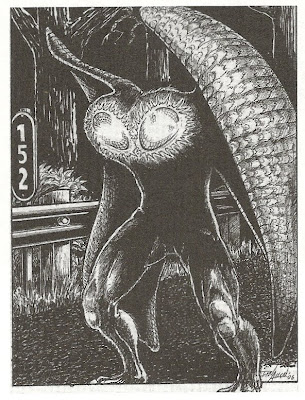 It's an extremely accurate depiction of the composite descriptions: No face or head, big glowing eyes that resemble bicycle reflectors, huge wings, whether or not it has arms remaining vague and so on. Pretty detailed and remarkably buff legs, though.


Here's the second, by Ricardo Pustanio: 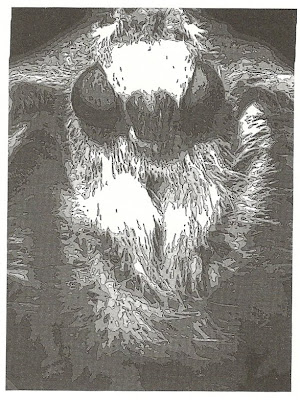 He depicts the Mothman as particularly moth-like, which doesn't really jibe with the descriptions, but I guess if those big, buggy eyes glowed it could be seen as accurate. I guess it depends on what the rest of this Mothman looks like.

Side note: I'm reading "The Monstrumologist" by Rick Yancy, & the monsters in it are Herodotus & Pliny's "anthropophages"-- man-eating humanoids with their eyes in their shoulders & mouths in their chests. I'd read them in the originals back in college, but the Mothman connection never clicked until now.

Huh, I guess they do have similar eye-placement...