Let's check in with Art Baltazar and the DC Super-Pets 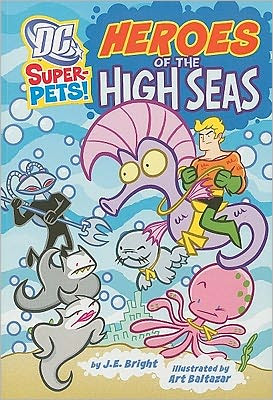 Devoted link-followers may recall a post I did for Robot 6 a few weeks ago about Picture Window Books' DC Super-Pets series of easy-reader prose books by illustrator Art Baltazar and different writers.

At the time, I'd only managed to track down three of the first wave of six books (yet more are forthcoming). Well, this past week I managed to find two more of those initial six books through my library's inter-library loan program: John Sazaklis' Royal Rodent Rescue, in which Streaky the Super-Cat tries to foil Catwoman's cat Rozz's Metropolis crime spree, and J.E. Bright's Heroes of the High Seas, in which Aquaman's pals Topo, Storm and Ark stop Black Manta's pet mantas from destroying Atlantis.

As a regular reader of Baltazar's Tiny Titans, in which a kitten version of Streaky regularly appears, it was neat to see a grown-up Streaky in Royal Rodent Rescue—along with a grown-up Supergirl, who is mentioned teaming up with Batgirl at one point, but is only drawn by Baltazar at the beginning. 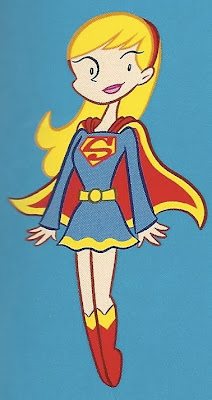 Sazaklis writes Streaky the Super-Cat a lot like a regular cat, with Streaky regularly stopping to curl up and take naps between super-acts.

For example, while napping at the Fortress of Solitude, he hears an alarm signaling a break-in at an appliance store in Metropolis. He flies there to see police already on the scene, so goes into the store and takes a nap atop a TV.

The villain of this piece is Rozz, a female cat who is apparently original to the book (I don't remember Catwoman having a cat by that name, anyway). Oddly/adorably, she dresses up just like her master Catwoman, making her a cat wearing a cat-suit: 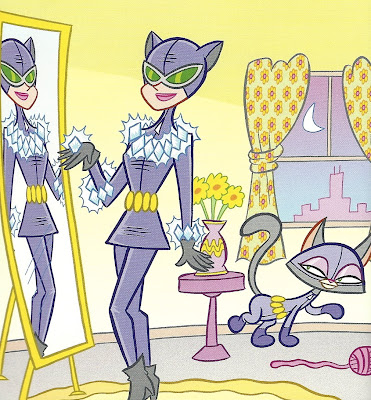 The book suggests that Batgirl is Catwoman's archenemy, not Batman, and when she sees Batgirl and Supergirl teaming-up in Metropolis on TV, Catwoman decides that means the coast is clear for a Gotham crime spree.

Rozz, on the other hand, decides to journey to Metropolis and try her paw at crime there. Her main crime, the one referred to in the title, is kidnapping the pet hamster of visiting royalty and holding it for ransom. The highlight of the book, for me anyway, was the scene where Rozz breaks into a TV station and communicates her demands to the viewing audience at home. But, because she's a cat, it's just a bunch of meowing (to everyone who isn't also a cat, like Streaky).

Heroes of The High Seas was the one I was most looking forward too, as it featured my favorite of the pet-having superheroes, Aquaman. There's Topo, a Silver Age Aquaman character (who apparently functioned as a one-cephalopod band in the comics, just as he does here!), Storm, the name of Aquaman's giant sea horse from those crappy old Aquaman cartoons, and the new character Ark, a little seal, whose presence here instead of Tusky (Aquaman's walrus sidekick in the same cartoons Storm used to appear in), sort of confused me.

Here's a nice image in which you can see all three super-pets, as well as Aquaman's whole court, as drawn by Baltazar: 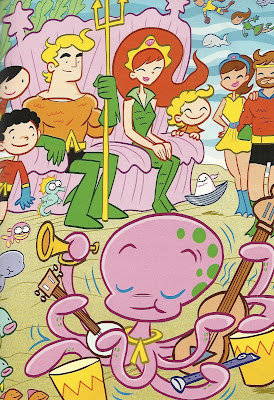 Baltazar makes some very, very strange choices in his character design for some of these animals. Ark, for example, seems to have legs in almost every drawing of him, with knees and everything, giving him the appearance of a humanoid seal instead of a normal seal. And I had no idea what species the two villains, Misty and Sneezers, were supposed to be until the text revealed that they were rays. 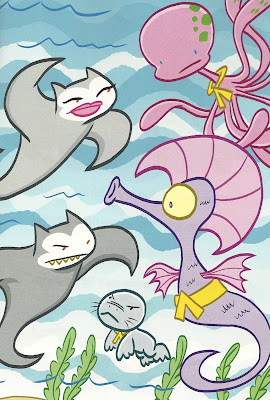 Personally, I would have guessed "ghost cats." I worry that some day some kid is going to grow up thinking manta rays look like gray ghost cats because of this book.

I'm still on the look out for the final of the first six books, Midway Monkey Madness, which features Beppo The Super-Monkey, Gleek and the Wonder Twins from Super Friends and Gorilla Grodd. And the next round looks even more awesome, with books featuring Hoppy The Marvel Bunny, The Green Lantern Bug Corps and even Krypto's pals in the Space Canine Patrol facing off against villainous cats from The Phantom Zone!
Posted by Caleb at 5:51 PM

Not to undercut Selina's status as DC's premiere s&m fetish queen, but sub 'mistress' for 'master' when talking about her relationship w/ Rozz. It sounds nicer.

Caleb, sorry for going off topic here but are you still into the Suicide Squad?