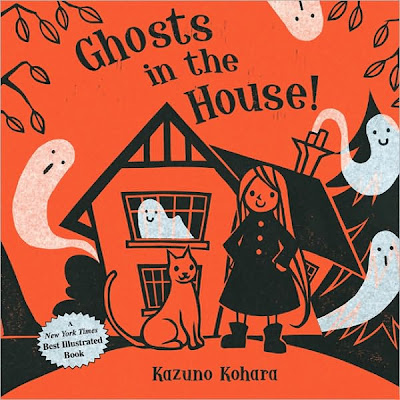 The story in Kazuno Kohara's 2008 picture book Ghosts in the House! (Roaring Brook Press) is an incredibly simple one, although there is a nice, sharp transformative twist almost as soon as it begins.

"Once there was a girl who went to live in a big old house at the edge of town," are the first words of the story, and they appear over a big, two-page image of a little girl in a black dress pulling a suitcase on wheels behind her, with a big, light-colored cat perched atop it. (The size and shape of the pages exceeds that of my scanner, so apologies in advance for the relatively poor quality of the images below).

The house has one problem, however, which you probably already figured out, given the title. While the girl and her cat are taken aback by the dramatic, sudden appearance of a ghost, but in a four-image sequence that stretches across two pages in one long comic strip-like sequence. Here are are those two pages: 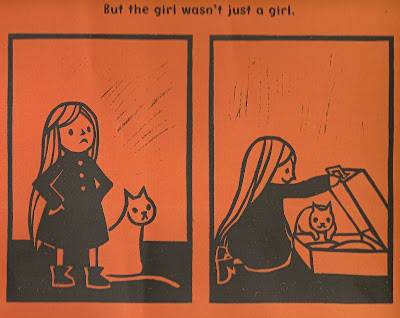 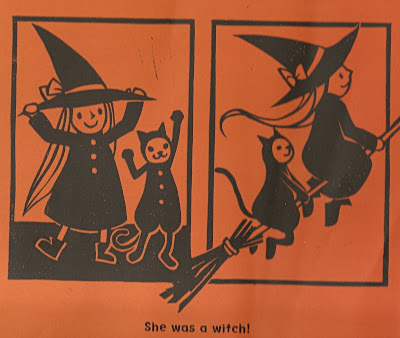 (I love this sequence, particularly because while the little girl has the standard witch hat as her witch "uniform," which she puts on like a construciton worker might put on his hard hat before clocking in, her cat also has it's own little witch outfit (familiar outfit, perhaps?) and it's a wierd little body-suit with buttons.

The only thing more charming than the fact that the cat dresses up for action along side its girl is how excited it is; check out that celebratory fist pump!

Rather than being the victims of the ghosts, the girl and her cat immediately go on the offensive, using their witch-knowledge to catch the ghosts, the first of which, when stuck in that neatly shaped little bucket, "possesses" it so that the bucket has the ghosts' expression visible on it. 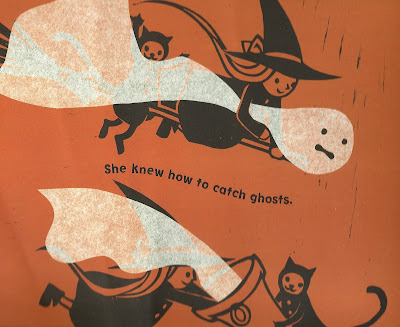 I say they go on the offensive, and they do chase down and catch all the ghosts, but there's a gentleness to their conflict, as if they're playing with the ghosts, who, in turn, are aware of the game, and are willing participants in it. Here's part of the page where they stick the ghosts in the washing machine— 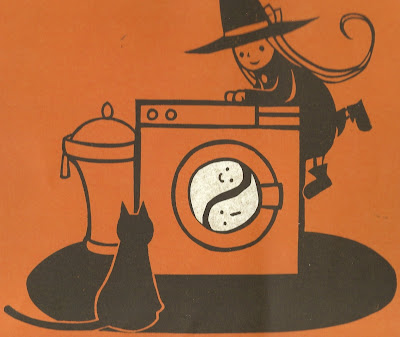 As you can see, at least one of the ghosts is perfectly happy to be in a washing machine.

The rest of the book concerns itself with what happens next. The ghosts are hung out to dry on a clothes line, and then each is found a different task to do around the house, one that doesn't involve scaring anyone. Here, for example, is on such use for one ghost: 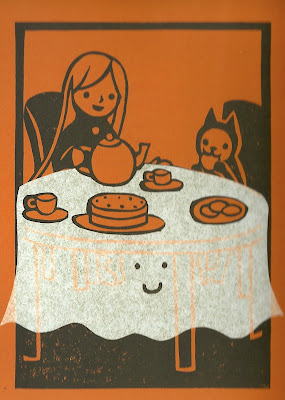 The specifics of these assignments are ones you've probably seen iterations of before, if you've been consuming pop culture for very long (if you're in the book's target audience, then someone pointing out the similarity between ghosts and sheets might actually be new to you).

If the jokes in these images aren't all new, they are somewhat transcended by the matter-of-fact way in which Kahara presents them, and in the stunning artwork with which the entire book is presented (and which my poor scans no doubt do a terrible job of conveying).

There are exactly three colors in the book. The vast majority of them are Halloween orange and black, with the ghosts appearing a gauzey, semi-transparent white. Kohara's designs are super-simple, to the point that the shapes that her characters are built of just barely tiptoe over the line from being actual shape-shapes assembled into the forms of a girl and a cat and being drawings of a girl and a cat.

The artwork looks like it may be done with woodcut or even elaborate stamps, though what it reminded me most of is something I remember doing in ninth grade art class, but I can't remember the name of. Basically, you'd take a brightly colored piece of paper, paint it black, and then scrape off the black to reveal the color below in the shapes and lines you want...a sort of laborious, reverse-drawing.

I don't actually know how Kohara made the book, but her art has a wonderful tactile-look to it, as if it were done with woodcuts or stamps...like it wasn't something mass-published so much as homemade. That goes double for the ghosts, which actually look like they might be made of some sort of sheer cloth-like material cut into ghosts shapes and affixed right onto the pages.

It's a great little book, and is beautiful from cover to cover. The inside front and back covers are two-page spreads of black stars shining on orange fields, ghosts swirl from somewhere off page to peer at the reader on the page with the copyright info, and the girl and cat open the door into the book on the title page.

Kohara has another picture book which seems to be made in the same style—Here Comes Jack Frost—which I intend to reserve from my library as soon as I post this.