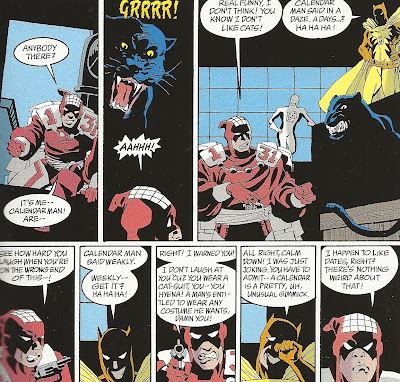 I scanned this for the post I did on Tales of The Batman: Tim Sale that I did the other day, but I ended up not having any room for it. In this scene, Catman has just brought new recruit Chancer back to the hideout to meet the rest of the gang, which, of course, includes Calendar Man.

I love everything about that sequence, from Calendar Man's explanation that the reason he screamed  was that he doesn't like cats (and not that a huge black panther just snuck up on him roared in his ear), to Catman's puns, to Calendar Man's framing of costume choice as something akin to a civil right (and the fact that he gets angry at Catman rather than firing back with cat-puns) to the way Sale draws those wonderful costumes and looks on their faces.

It occurs to me that this kind of story is something of a casualty in an era of more "realistic" comic books, wherein supervillains now generally have complicated motives involving revenge and life and death situation and psychological trauma (rather than, you know, "I happen to like dates"), and they've largely abandoned goofy costumes in favor of body armor and the like (See The Wrath from the 1980s and The Wrath from the current story arc of Detective Comics for a good example).

While this Catman's costume is still fairly bad-ass (and itself a more serious revision of his original costume, with a big C on the chest), the Catman of Secret Six wore one with obvious signs of tinkering: He didn't have a big cat face on his chest, but instead a bloody claw wound symbol. He fought with vicious, razor weapons he used like claws, and had an incredibly bleak origin story involving child abuse. He also didn't hang out with a panther named Sasha.

The last Calendar Man story I read, in the digital-first-and-then-print Legends of the Dark Knight, featured an iteration the tattooed version of the character (ironically, designed by this very artist) wearing an Uncle Sam suit appropriate to his Fourth of July terrorist plot.

The storyline this image is from, "The Misfits," was about a group of minor, sad-sack Silver Age villains trying to gain respect in a world that's left them behind. Tonally, it has some overlap with that Neil Gaiman/Bernie Mireault Riddler story from 1989's Secret Origins Special #1, or an issue of one of the JLI-era League books guest-starring Flash villains Captain Cold and Heatwave.

I suppose these sorts of stories haven't completely gone away, Superior Foes of Spider-Man is definitely telling a long-form version of one (although their costumes are all pretty updated and cool-looking, save for The Shocker), but I do lament DC's knee-capping of their possibility.  I understand the drive to make every villain more modern, more serious, more evil and more like something you might see in a video game or movie adaptation, but there's certainly something to be said for, say, just letting Kite Man be Kite Man, you know?
Posted by Caleb at 5:44 PM

I certainly could have lived without the child abuse story, but I still think Simone's Catman was something interestingly different from the geenral trend you're rightly criticizing-- more like Ostrander's Suicide Squad than like Identity Crisis.