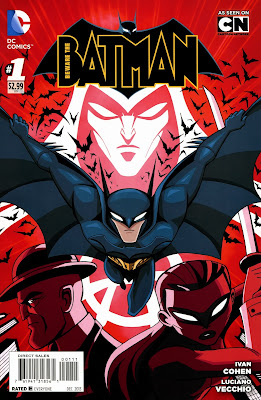 I thought about reviewing this for Good Comics For Kids, and it was with that in mind that I read it a few nights ago, but I quickly realized pretty much everything I had to say about it wasn't really a commentary on its quality (it's excellent, if unremarkable; a perfectly executed, straightforward, generic Batman done-in-one of which the only really interesting bits reflect the unusual choices of the producers of the cartoon its based on and, perhaps a confluence of coincidences). Rather, everything had to do with my own, personal, fan-ish responses.

Now, what's noteworthy about Beware the Batman, aside from the fact that it's the first 3D, computer-animated Batman cartoon, and, I should point out here, that I've never seen an episode of it yet, is how far it apparently veers from previous Batman cartoons.

This Alfred does not have a mustache (!!!), and seems to be more of an old, tough guy who helps Batman out behind the scenes (a little like the Alfred of Geoff Johns and Gary Frank's Batman: Earth One original graphic novel, only sans the goatee).

There are no Robins or Batgirls, but Batman's sidekick is instead Tatsu/Katana, who here seems to be a teenager or at least a much younger person than Batman (In that respect, at least, not unlike the version who appeared in Batman: The Brave and the Bold), and she seems to be rather Kato-like. In this issue, we see her serving as Bruce Wayne's chauffeur, accompanying him into a party and, later, putting on a small black domino mask and wielding a sword with a greenish hue and runes on it (it looked like the sword from Crouching Tiger, Hidden Dragon) and fighting crime with him. As with Green Hornet's Kato, I'm not really sure how they'd be able to maintain their secret identities for longer than a few days like this, but whatever.

And the rogue's gallery is apparently made up entirely of characters that have never appeared in any of the previous cartoons, which is interesting in that it seems like animators might have felt like there wasn't many new ways to go with the traditional characters. While Batman: The Animated Series played them all relatively straight, using streamlined versions of the characters from the comics, and even redesigned them all at one point (apparently fearing they were getting a bit stale), later shows cast about for new ways to reinvent them. The Batman featured drastically different takes (including very physical versions of characters like The Penguin and The Joker, ones able to hold their own in kung fu fights with the superhero) and Batman: The Brave and the The Bold plundered Batman's Silver Age apperances for obscure characters to use, and used Dick Sprang and Sheldon Moldoff influenced characterizations of the big villains (and, its worth noting, using villains from throughout the entire DC Universe to pit against Batman). With all those avenues exhausted, plus the various versions of the characters in videogames and direct-to-DVD movies, well, why not give Mocking Bird and Professor Pyg and The Silver Monkey a shot?

So in addition to Batman, Alfred and Kato-ana, this issue rather prominently featured evil-looking industrialist Simon Stagg (Metamorpho's boss/antagonist) and Beware The Batman's version of Anarky.

This Anarky has been pretty significantly redesigned from his comics counterpart, wearing all white instead of red and gold (That's his hooded head on the cover, although he looks a bit more like The Spectre, doesn't he?). He is apparently an adult now, rather than a teenager, but his goals are more-or-less the same: Doing away with the present military industrial complex/capitalist-ruled class society of haves and have-nots in order to bring about a new social order. In the comics, particularly his first few appearances, he was an intriguing villain specifically because he tended to have noble goals—punishing polluters who were destroying the environment, for example—and he forced Batman into the uncomfortable position of having to fight to defend the morally corrupt but technically lawful from an angry, brilliant teenager who was morally righteous, but technically a criminal—and prone, in that first story, anyway, to a zeal that left his targets badly hurt.

Here he's infiltrated Stagg's company and is trying to plunge Gotham City into some sort of property-less society, which begins with everyone robbing and looting one another's homes. There's a Occupy Wall Street-like protest movement in town too, and Anarky seems to have something to do with them, even if he's just hiding amongst them, or trying to manipulate them. Or something.

As much as I've always liked the character, Anarky never struck me as more than a minor villain, or even more of a foil character or frenemy for Batman, along the lines of Catwoman. But this single issue really sold the character as a sort of opposite number to Batman, a character who has more against Bruce Wayne the businessman than Batman, the vigilante.

Writer Ivan Cohen links Anarky a lot closer to creators Alan Grant and Norm Breyfogle's inspiration for the character, the masked vigilante in Alan Moore and David Lloyd's V For Vendetta; closer than ever before, with Anarky  here borrowing an alias from an associate of Guy Fawkes and planning his big move for Guy Fawkes Day. Guy Fawkes being the inspiration for the V character, of course. And Guy Fawkes masks, popularized by the movie based on the comic book V For Vendetta, the comic that also inspired Anarky remember, have become common sights in any large modern steet protests, like the one in the Occupy Gotham-like one seen in this comic.

I'm not familiar with the work of either Cohen or artist Luciano Vecchio, but they both seem to have done quite a bit of work for DC's various all-ages comics, and both do a fine job here. Having not seen the show, I'm not sure how these designs look in motion, but I like them in the two-dimensions of paper, particularly the unusual Batman design, which has wide, horn-like bat ears reminiscent of the character's first comic book appearance and a black-on-black costume almost never seen outside of the live action movies.

Seeing him hang out with a little Asian girl sidekick, I kept wishing they had used Cassandra Cain in this instead of Katana, but given that Simon Stagg appears in this issue and Black Lightning villain Tobias Whale is apparently going to appear in the third issue, I wonder if the producers' plan wasn't to gradually introduce different members of The Outsiders throughout the series, and perhaps follow this show up with a Batman and The Outsiders one (In The Batman, for example, Batman gradually met various superheroes until they formed a Justice League toward the end of the show's run).

Maybe if Anarky achieves some kind of new prominence thanks to this show and this comic it's based on, DC will get Grant and Breyfogle back to do a New 52 version of the character in his own title. As much as I love the original character, I sure wouldn't mind seeing his creators working on a monthly again, and seeing a new version of him acting as a monkey wrench in a the new, New 52-iverse could be fun.
Posted by Caleb at 8:22 PM

Anarky has actually just appeared in the New 52, in Green Lantern Corps #25. There he leads a gang attempting to seize control of a Gotham neighborhood during the hurricane/blackout going on in "Zero Year."

His costume is kind of uncreative, just a white mask and a hoodie, but maybe that's because it's so early in the character's history. Also of note is that he appears to be one of the characters whose race has changed since the reboot.