I was not aware of this.

Rather high on the list of subjects I don't know a damn thing about it is botany, and therefore I was quite surprised when I arrived at this passage from the story "Nothing Lasts" from Seth's Palookaville #21 the other night: 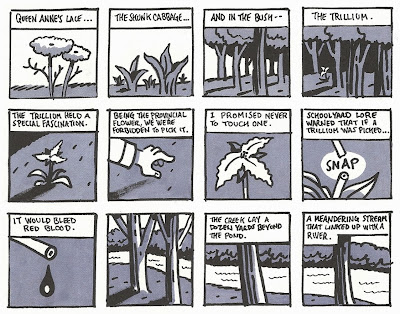 It's a passage during which Seth is recounting the various species of animals and plants found by a creek he used to explore and play near when he was a child. Until I reached that fourth panel, I assumed that the trillium was a made-up flower, given that it is the title of cartoonist Jeff Lemire's latest series for DC Comics' Vertigo imprint.

In it, they're sort of magical flowers found near a temple in South America and a in some other planet that allow those who ingest them to share their thoughts or memories or meld minds or something. There's also some kind of alien race that rather resemble flower people that tend them.

But no, turns out there's really a real flower called trillium, and Lemire did not invent them nor their science fiction-ready name.

Trillium, it turns out, is the emblem and official flower and the official symbol of Ontario, the Candaian province where both Seth and Lemire are from.

And while Ohio's state flower is the scarlet carnation, apparently we also have a state wild flower, and do you know what it is? Go on, guess.
Posted by Caleb at 9:42 PM

Years ago I read a book that included the trillium flower in it. Until this post, I thought that was a made up flower from the fantasy world. Very cool to learn it is a real thing.