On some recent DC Comics-related imagery

From the last two pages of all of last week's DC Comics I read... 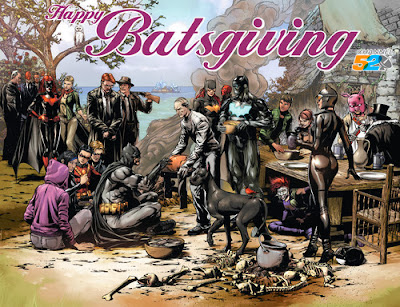 Actually, it looks like one of those promotional images that DC occasionally produces, wherein the image conceals a bunch of generally impenetrable (until after the fact) symbolic allusions to upcoming storylines. My memory's a bit cloudy on this, but I seem to remember one for Infinite Crisis or Final Crisis (I remember one with Wonder Woman comforting a crying Superman) and for Countdown, and at least one specific to the Batman family of books, that "I Am Batman" teaser in which Two-Face had an awesome Batman costume...

Anyway, I'm not as engaged with plot specifics as I used to be, but a few things jumped out at me about this image, which DC Women Kicking Ass identified the inspiration for. 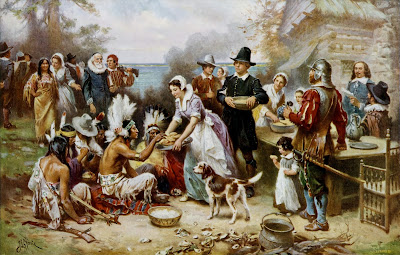 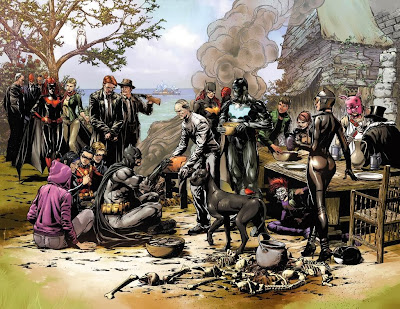 Here's what jumped out at me:

1.) All of the current Bat-Pets are present and accounted for save Bat-Cow. And I see an awful lot of bones. Around. Hopefully they didn't dispose of Bat-Cow by, you know...

2.) There are a whole lot of folks in this image I don't recognize. Like that blonde dude. I suppose it could be Cluemaster, since we've been told Stephanie "The Spoiler" Brown is going to be appearing in the upcoming Batman Eternal series (and there's someone wearing a purple hood there). I suppose it could be Calvin "Talon" Rose with a new mask, or the New 52 introduction of Jean-Paul Valley in a new mask. Or it could be Dick Grayson with bleached blonde hair, perhaps as a new hero (He was outted in Forever Evil and I'm not sure how they plan on putting that back in the box, as Dick Grayson being Nightwing pretty much outs Bruce Wayne as Batman too...I guess we'll see. At any rate, Grayson's missing from the image).

3.) Given the inspiration for the image, I really think Chief Man-of-Bats and Red Raven should be in there; in fact, Man-of-Bats should be sitting where Batman is.

4.) What on earth is Alfred wearing? A radiation suit? Just how does he prepare turkey? I know fried turkey is becoming a thing now; maybe the rich and eccentric are trying even more out there an dangerous ways of turkey preparation?

5.) The thing I can't take my eyes off though is Batman and the way he's just grabbing that turkey (and thus perhaps accounting for the dirty look Alfred is giving him). It just looks so weird and awkward. Perhaps that's Caveman Batman from the first issue of The Return of Bruce Wayne...? 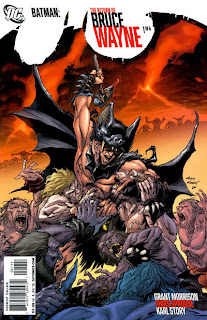 His table manners would seem to indicate that it is.

At any rate, let's all endeavor to make Batsgiving an annual holiday, and spend ever Wednesday before the Wednesday before Thanksgiving, put on our weird, fetish costumes, get together with our friends, family members and sworn enemies, and think about all of the things we're thankful to Batman for... 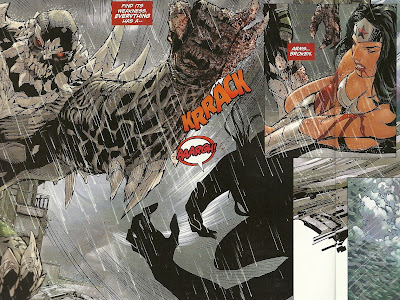 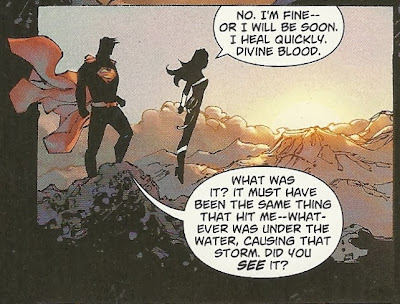 So, is that some kind of new power? I don't think "healing factor" is something I've ever heard in association with Wonder Woman before, primarily because she's so strong, fast and invulnerable (and her hometown has something called a purple healing ray) that she probably doesn't need one.

Then again, she's only had "divine blood" for about two years now.

If it's completely unlcear what's going on in those images (the lay-out the first scan is from was more horizontal than vertical, and artist Tony S. Daniel used irregularly sized panels in it), Doomsday punches Wonder Woman so hard he breaks both her arms (but he disappears or teleports away somehow before he can deliver a killing blow, so she's okay).

The issue, written by Charles Soule and inked by Batt and Sandu Florea, also features another prominent Superman villain, and a scene during which Superman meets some of Wonder Woman's Olympian family, namely Smith, Discord and Sun/Apollo. None seem particularly happy to meet him, and Apollo and Superman even exchange blows. 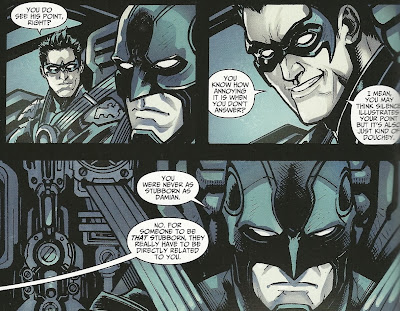 Apologies for the poor scan (hard to flatten a hardcover on to the surface of a scanner), but hopefully the second panel is still legible. Despite writing about Tom Taylor's Injustice last week (repeatedly, even), I completely neglected to mention that panel, in which Nightwing refers to one of Batman's behavioral ticks as "kind of douchey."

I'm curious: Is that the very first instance of some variation of the word "douche" in a DC comic...? 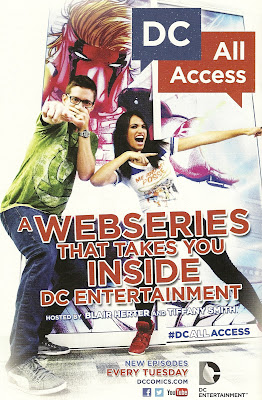 Maybe the single most horrifying image I've ever encountered between the covers of a DC Comic. Largely because it not only frightens me, but makes me feel 1,000 years old.

(Also, what's Grifter of all characters doing there?)
Posted by Caleb at 7:44 PM

I'm fairly sure that Alfred is wearing a straightjacket--look at the lines, and the tear at the "cuffs" shows his hands would have been covered. A stay in Arkham coming, perhaps?

I assumed it was a chef's outfit. I was more curious about Commissioner Gordon in handcuffs, but then again the only bat-related book I read is RHatO.

The in-house ad reminds me of those mid-90s Saturday morning game shows aimed at 12 year olds where the 20something hosts were forced to dress and act like what TV execs thought was "cool" and "extreme". All they need is to be using a set of videogame controllers that aren't plugged into anything.

Oh, that's just Penguins Iceberg Casino. I think it's now located on a little island, from what I've seen of it. Not sure if the point is that its supposed to be outside of U.S. waters or, just that it's an island casino for aesthetic purposes/to make it more iceberg-y.

Paul Pope gave a talk at OSU a few years back I attended, and when talking about scenes from BATMAN YEAR 100 he mentioned how weird it was that superheroes always seemed to eat with their gloves on, which is why he included some eating scenes, sans gloves.

What is really disgusting, is that Batman is eating WITH GLOVES ON! No wonder Alfred is horrified! How incredibly gauche.