February seemed like a quiet-ish month to me, despite it being the penultimate one for DC's Forever Evils series, and its many tie-ins (I like how "Blight" showed up in Constantine and some of the other magic-hero titles, as a tie-in to the crossover that is itself a crossover).

One thing that did jump out at me was multiple references to "steampunk variants," which seems like a rather Marvel-like thing to do (Themed variants, that is). I suppose it will be interesting to see what DC comes up with for those, if they're common enough that I'll even get to see them. Steampunk versions of various DC superheroes seems like something that occurs naturally on the Internet, so I'm curious to see what "official" versions might look like.

Anyway, to take a look at everything that DC plans to publish in February of next year, you can click here. Otherwise, carry on reading this post. 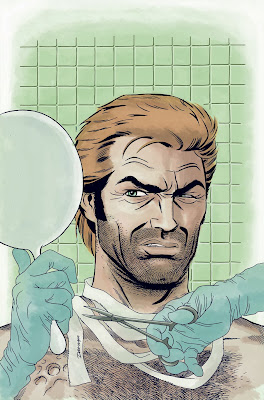 ALL-STAR WESTERN #28
Written by JUSTIN GRAY and JIMMY PALMIOTTI
Art by MORITAT
Cover by DARWYN COOKE
On sale FEBRUARY 26 • 32 pg, FC, $3.99 US • RATED T+
Old West meets modern medicine! Are Hex’s scars healed? Trapped in a future he’s still coming to grips with, Jonah Hex confronts his own history as he uncovers a museum dedicated to the scarred bounty hunter’s days in the Old West.

Jonah Hex's plastic surgery adventure...? Okay, I haven't read every Jonah Hex story ever written or anything, but I'm pretty sure this isn't one that's been done before. 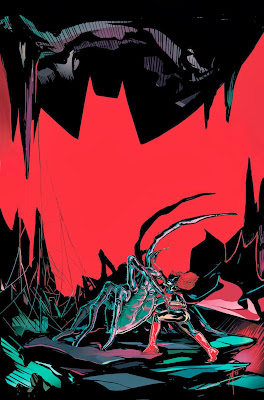 BATWOMAN #28
Written by MARC ANDREYKO
Art by JEREMY HAUN
Cover by TREVOR McCARTHY
...
On sale FEBRUARY 19 • 32 pg, FC, $2.99 US • RATED T+
...
As Batwoman reels from Maggie’s surprising revelation last issue, the two must work together to discover the secret of the Wolf Spider. Who hired him and what are his deadly plans for Gotham?

Maggie's surprising revelation...? What could that—OH MY GOD MAGGIE IS A GIANT SPIDER!!! No wonder they can't get married. If they did, Maggie would then have to eat Batwoman alive on their wedding night. 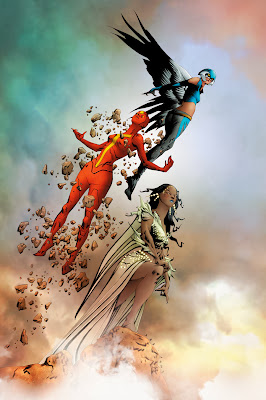 EARTH 2 #20
Written by TOM TAYLOR
Art by BARRY KITSON
Cover by JAE LEE
...
On sale FEBRUARY 5 • 32 pg, FC, $2.99 US • RATED T
Retailers: This issue will ship with two covers. Please see the order form for more information.
Superman’s plans for Earth 2 finally come to light as Batman, Hawkgirl and Red Tornado join a new ally who could turn the tide in the war with Apokolips.

If that's Tsunami, she's pretty cool-looking...at least as drawn by cover artist Jae Lee. You know, this book seems to be drifting further and further afield from its original pitch as the New 52 version of the JSA, with an evil Superman, a new Batman and Lois Lane in the body of an android Red Tornado... 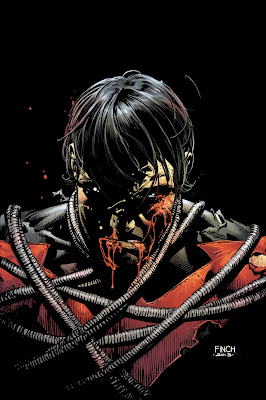 FOREVER EVIL #6
Written by GEOFF JOHNS
Art by DAVID FINCH and RICHARD FRIEND
Cover by DAVID FINCH
...
On sale FEBRUARY 19 • 32 pg, 6 OF 7, FC, $3.99 US • RATED T • Combo pack edition: $4.99 US
...
The final fate of Nightwing! The most unlikely of allies have set the Crime Syndicate in their sights — and they’re playing for keeps while the life of a hero hangs in the balance! Plus, the identity of the mysterious man in the hood is finally revealed!

Wow, has there ever been a big, line-wide crossover event series with duller covers than those that Finch has been providing for Forever Evil? That's six in a row with no background at all; the previous five were just various group shots of villains not doing much of interest (Marching, punching, posing).

I'm not worried about "the final fate of Nightwing," as DC has a lot of more redundant characters to kill off before they get to Dick Grayson (Jason "Red Hood" Todd and Tim "Red Robin" Drake, for example, and that's just among Batman's former sidekicks). If they do kill him off in this series, then I imagine that's a pretty clear sign that they've already decided to reboot The New 52, either a re-reboot, or more likely a partial de-reboot, in which the good stuff from The New 52 is retained as the old DCU continuity is returned.

I sincerely hope that "the mysterious man in the hood" isn't Earth 3's Lex Luthor, as that would be way too obvious. 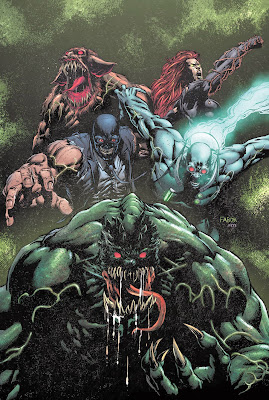 FOREVER EVIL: ARKHAM WAR #5
Written by PETER J. TOMASI
Art by SCOT EATON and JAIME MENDOZA
Cover by JASON FABOK
...
On sale FEBRUARY 5 • 32 pg, 5 of 6, FC, $2.99 US • RATED T
Retailers: This issue will ship with two covers. Please see the order form for details.
Bane must face Scarecrow’s army of criminal psychopaths who have been enhanced by his Venom toxin! The fate of Gotham City hangs in the balance as Bane faces odds even he might not be able to beat!

Wait, we just saw a bunch of Batman villains all hopped-up on Venom in the first story arc of the New 52 Batman: The Dark Knight...!

You know, looking at Fabok's version of Killer Croc there, I wonder if he knows the Venom being referred to is a sort of super-steroid, and, not the Marvel symbiote, because Croc's sure looking awfully drooly and long-tongued... 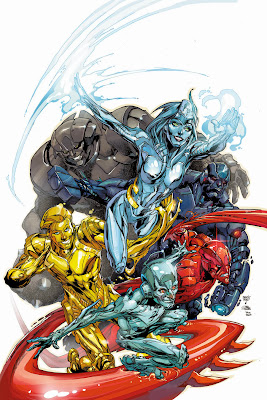 Here are your New 52 Metal Men, as drawn by Ivan Reis on the cover for Justice League #28. They could have been worse. Just looking at this image, Mercury is the only one who seems wrong, but the longer I look at the image and think about it, I guess I don't see any real reason for them to look quite so robotic.. If the Metal Men are still shape-changers—and Mercury at least seems to be—then there's no real reason for them to have armor plating and look quite so built, unless they want to, for some reason. 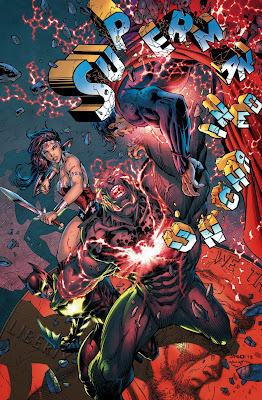 The only thing I really like about this cover of Jim Lee's for Superman Unchained, in which it looks like New 52 Wonder Woman and Superman are teaming up with a life-size Batman action figure to fight an off-model Darkseid (that's new character Wraith though)? That they wrecked the logo in the melee. Or maybe Wraith attacked the logo on purpose: "Superman Unchained? What kind of dumb title for a Superman comic is that? Rraagh!"
Posted by Caleb at 8:50 PM

If they did, Maggie would then have to eat Batwoman alive on their wedding night.

I'm going to just leave that one alone...


No, I don`t think that good ol` Jonah has had his face fixed before.

I feel like I should make a Two-face joke regarding cosmetic surgery. Can`t come up with a good one.

I kinda like that look on Metal men. Maybe it`s simply thanks to Reis`s talent.

Ha, I stopped after writing that sentence and thought about how to make it seem less...um, you know. I changed it to "kill and consume" at one point, and was about to start googling spider mating habits when I thought maybe if I just but "alive" in there it will help.

I'm assuming that, IF they ever were to de-reboot, they'd basically just keep the stuff from BATMAN, BATMAN INC, the Lantern books and maybe something like Cyborg being on the League, even if he wasn't a founder or something like that.

Well, the only metal that's liquid at room temperature sure doesn't look so fluid now.