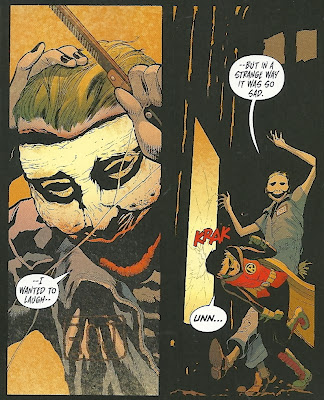 It's the first Thursday of a new month, which means I have an installment of "A Month of Wednesdays" at Robot 6, reviews of every new graphic novel released in the previous calendar month that I read but didn't review elsewhere. So click here to read shorter-ish reviews of Avengers: Endless Wartime (pretty good, or pretty great relative to 21st century Avengers comics), Batman Vol. 3: Death of the Family (pretty great), JLA: Earth 2: The Deluxe Edition (still great), The Joker: Death of the Family (not so much), Palookaville #21 (pretty great), The Smurfs Christmas (pretty smurfy) and Tropic of the Sea (great).

The above image is from the Joker collection, and is taken from the included Batman and Robin arc, drawn by Patrick Gleason, with either Mick Gray or Keith Champagne inking it. Gleason is the all-around champion face-less Joker wearing his own face drawing champion.

Speaking of which, I'd like to ask a question of any of the Batman readers in the audience. Okay, so "Death of the Family" is set one year after the events of Detective Comics #1, in which Joker had his face skinned off. Was TEC #1 set in the present at the time (i.e., Year Five of the New 52's new five-year timelie?), or was it at some undetermined point in the past...?

Because if TEC was set in the present (Year Five), that means an entire year has already passed in The New 52, and we're already on Year Six. According to the text boxes in the "Zero Year" tie-ins, "Zero Year" is six years ago. But does that mean Zero Year is set the year before Year One of the New 52, or during Year One of the New 52? (I guess that would depend on how close to the beginning of the year The Joker had his face flayed off...?)

The new, shorter continuity really does my head in, and I think makes things even more complicated than a 10-12 year sliding timeline ever did.

For example, Barbara Gordon was paralyzed for three years, so how long was she actually Batgirl, counting the time she spent as Batgirl before and after her paralysis...? Less than two years? Maybe three, if a year passed between Batman #1 and "Death of the Family"...?

And how quickly did her dad James Gordon shoot up through the ranks of the Gotham City Police Department that he made commissioner in, what, a year or two? (He would have been Commissioner when Barbara was shot, right?)
Posted by Caleb at 8:42 PM

Why do you have to torment yourself with this so much? It`s obvious that the only explanation is: DCs timeline has been intoxicated due to massive amounts of alcohol, for almost three years now.

I can't even begin to make sense of the chonology of the New 52. It makes my brain hurt.

Anyway, I wouldn't try to make sense of it.

Do what I do when it comes to Batman continuity. Substitute any and all "five years ago" mentions to "15 years ago" or even "20 years ago". You'll enjoy the stories a great deal more, as the only way all of this history could have happened otherwise is if there was pure, uncut cocaine flowing in the Gotham water supply.

I don't really understand your dig at Avengers comics here or on Robot 6—Hickman's two series, plus Infinity, have been utterly fantastic and Bendis has largely stepped out of the picture, no?

Things like your time question and the earlier Batwoman question (and pretty much the whole Wonder Woman series) make me think that DC has made some genius decisions about continuity. There's enough suggest it's all connected and in some sort of sequence, giving fans something to figure out and analyze. But there are also things completely free of continuity for casual readers to just jump in and enjoy characters and stories on their own merits. It's what I'd like to believe anyway, not that Editorial can't keep their own creations straight.

And thanks for giving the insanely talented Rian Hughes his props on EW. When you give talented designers with a lifetime of experience in visual communications the opportunity to do what they do best, the result will be something amazing.