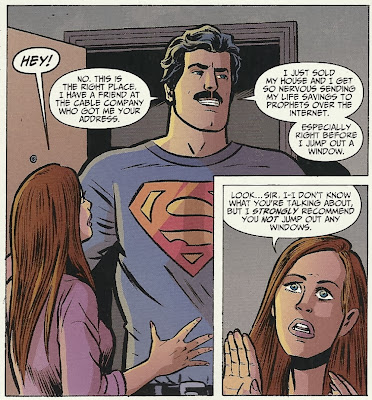 Adventures of Superman #7 (DC Comics) David Lapham's story, which occupies the first half of this issue, includes to elements I feel are pretty overdone in Superman books, namely religious movements springing up to worship the character and people being saved by Superman after jumping off of buildings. Luckily, Lapham has interesting twists on each, and they are related to one another in an unusual way. Lapham has a nice, clean, clear art style that looks great, and perfectly appropriate, too. The dramatic character moments work perfectly well, as they usually do in Lapham's art, and the action scenes featuring Superman fighting Metallo and flying around and stuff looks perfect, evoking the very best in old-school Silver Age Superman comics.

This was one of the better short stories I can remember reading since this anthology series launched, and has two rather incredible images, including Superman making a gigantic "peashooter" to just wreck Metallo, and a Superman adopting a "disguise" to confront the leaders of the Superman-worshipping movement (see above).

The back-up story is written by Tim Seeley and drawn by the great Mike Norton. It's not quite as impressive as a story, contrasting the bleak experience of a five-year-old Russian orphan with the super-exploits of grown-up orphan Superman, but it was nice to seen Norton not only drawing Superman in his real costume, but drawing Wonder Woman and Martian Manhunter in their original costumes too.

FF #14 (Marvel Entertainment) I'm not sure if this is really the penultimate issue of the Matt Fraction/Mike Allred-turned-Matt Fraction/Lee Allred/Michael Allred volume of the title, but it certainly reads like one. The ever-expanding alliance orbiting around Scott Lang and company—now including Sun Tzu,the shrunken tiger the kids named Cargo Manshark, an obscure Golden Age magician and a whole mess of repurposed robots—spend the issue planning and preparing for their final confrontation with Dr. Doom.

There's also a Japanese hot spring scene that could have come straight out of a manga comic (at least in set-up; Allred's art doesn't look like anyone's art but Mike Allred's) and a neat in-joke cameo from Matt Fraction, who made his first in-story appearance alongside Cargo Manshark a few issues back.

It's not just going to be sad when this title ends, it's going to be downright depressing. 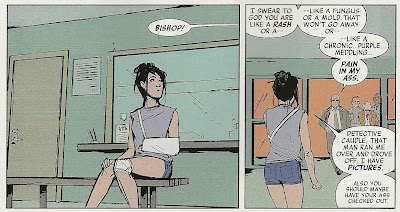 Hawkeye #14 (Marvel) Props to Fraction (him again!) and artist Annie Wu for this issue, which reads like an entire story arc of most comics, but is actually only 19 pages long (Of all of these books, I think this is the one that took the longest to read). This is a Kate Bishop (i.e. Lady Hawkguy) issue, set in L.A., and featuring her attempts to become a Luke Cage-style Hero For Hire, in order to earn some money.

It's a little disconcerting to match this Kate Bishop with the one in Young Avengers, as this one seems to barely know anything about crimefighting, law enforcement or superheroing ("Oh, thank God," she says in one panel, as someone pulls a gun on her and she raises a bow and arrow at him, "I was beginning to forget how to use this thing"). But, as usual, Fraction's writing is so sharp, witty and layered, it hardly matters. This Kate Bishop is fun to hang out with and read about, and Hawkeye is a fun and funny comic book, so if one wonders where her laser bow is or why she seems like this is her first rodeo at all, these are thoughts that come after the comic's over.

I continue to love this book, and while I'm not crazy about the split-focus (Clint Barton drawn by David Aja one issue, Kate Bishop by Wu the next), I understand it, Fraction writes about characters well, and both Aja and Wu are great artists.


Saga #16 (Image Comics) This comic is just the worst. 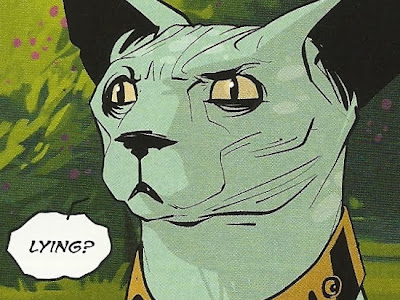 Oh Lying Cat, no one can sneak anything untrue by you, can they? 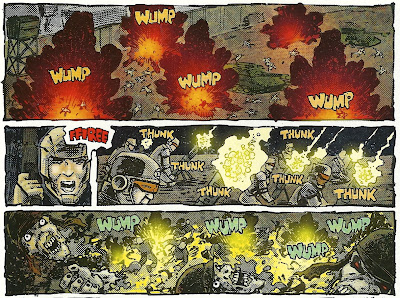 Zombie War #2 (IDW) The second half of an old Kevin Eastman, Tom Skulan and Eric Talbot's not-very-good zombie comic, seeing colorization and republication by IDW, with whom Eastman has been working on various Teenage Mutant Ninja Turtles-related projects. I didn't care for the first half, and probably would have skipped this one, had I not especially pre-ordered it the day the first issue came out.

The story's not very good and essentially pointless, just ending rather than concluding, but the art is nice, and I like Eastman and Talbot's gritty, ragged lines, their usage of blacks, the way they draw skulls and even the handwriting on the dialogue and special effects. It's an aesthetically pleasing work of absolutely no other value.
Posted by Caleb at 8:35 PM

Took a while for me to get what you meant with the Lying cat.

What if...everyone wished that FF wouldn`t end, during a meteor shower...

What about Kate Bishop running into Elliott Gould's Philip Marlowe while buying cat food? Most unexpected cameo ever?

THANK YOU for turning me onto FF. It's the first floppy comic I've bought regularly since the mid 90s and it's been a real delight.