Today at Robot 6 I reviewed the first collected volume of Injustice: Gods Among Us, the comic book adaptation of that dumb-looking fighting game, written by Tom Taylor and drawn by about seven artists too many. As the thing I liked most about the book—hich I ended up really rather liking, to my own surprise—was Taylor's writing, so I thought this would be a good opportunity to check out a few more things he wrote for DC that were just recently released, Injustice: Gods Among Us Annual #1 and Earth 2 #17.

Now one of the reasons I found Injustice to be such an unexpected pleasure, I suspect, was that in many ways it reflected the pre-New 52 DC Universe, and I found myself in more familiar territory than I've been in a long time when reading many DC comics.

Obviously, the status quo is pretty different—Superman and Wonder Woman are killers imposing their will on the world, and gradually getting more and more bonkers in the process—but even that is a sort of pre-New 52 thing, a good old-fashioned Elseworlds story.

Beyond that though, Injustice presents a DC Universe where The Joker has a face, Green Arrow has a beard, Hawkgirl exists and so on. The series' first annual is pretty much premised on a very pre-New 52 version of a character entering the world of Injustice: A totally '90s, "bastich" this and "frag" that, albino space biker version of Lobo. 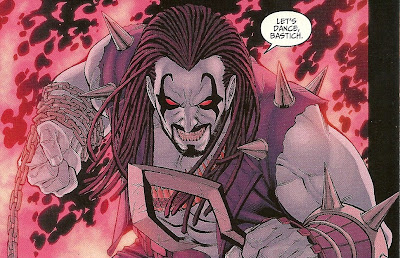 As the cover indicates, the story of the annual is that of Lobo taking out a contract on Harley Quinn, and running into some unexpected trouble.

In keeping with Injustice's apparent refusal to ever let a single artist draw more than one consecutive scene, this 38-page comic features four different artists—Xermanico, Mike S. Miller and Bruno Redondo and Jonas Trindade, who it looks like is only inking the Xermanico-pencilled pages that Xermanico didn't ink himself—and two different colorists.

I haven't read anything past issue six of the (paper version of) the series so far, so I think there's about a four-issue gap between where I left off and where this annual picks up; apparently in that time Green Arrow started hanging out with Black Canary (whose costume I actually rather like; it looks like her traditional bathing suit and fishnets look, but with some armor plating here and there), Robin started hanging out on the Justice League's satellite and Superman "punched a god ta death" and Lex Luthor has started working with Superman, developing a glowing green pill that gives people super-powers.

Lobo comes to earth in order to collect a bounty on Superman, but finds the Man of Steel very changed, which Superman demonstrates by forcibly flying Lobo to the sun and threatening to throw him into it, as that would destroy even the, um, Main Man, who needs at least a single drop of blood to regenerate from.

After thinking about it for all of one panel, Superman then hires Lobo to hunt down Harley Quinn for him, and Lobo agrees—in exchange for a super-pill. Harley gets her hands on the pill, and with her newfound powers, plus the help of Green Arrow and Black Canary, she is able to defeat Lobo, first through extreme violence and then through the power of psychotherapy. 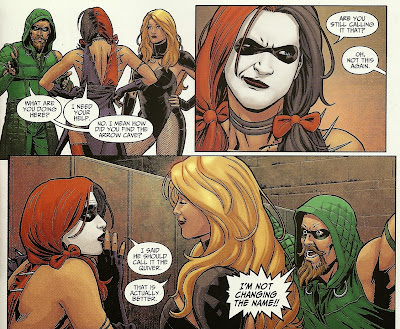 Once the plot is adequately set up, it's a pretty fun and funny comic; the best scenes of Injustice so far have all been the ones in which Harley and Green Arrow banter, so naturally putting the two of them together with Canary and Lobo works really well. There's even a single page that felt an awful lot like an old Giffen/DeMatteis/Maguire Justice League page (That would be page 31, which comes during Bruno Redondo's section of the book; Redondo is probably the best of the way too many artists working on Injustice, from what I've seen so far). 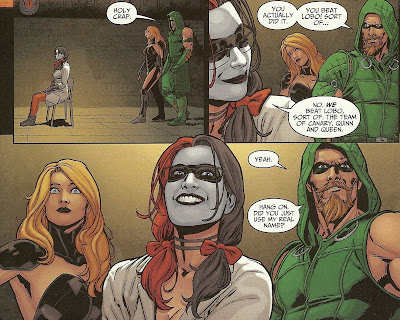 I love the expressions in that last panel.

Anyway, this was a pretty excellent installment of the surprisingly entertaining series, and one I suspect will be especially welcome to any long-suffering Lobo fans in DC's reading audience.

As for Earth 2 #17, it's the start of Taylor's run on the book, which follows that of James Robinson. It's nice to see DC giving Taylor something else—and something in-continuity—to work on, even if it's not  a Green Arrow/Harley Quinn book. Trouble is, this doesn't really feel any more a part of the DC Universe than Injustice does.

Set on the New 52 version of Earth-2, where the Justice Society lives, this series began by introducing new versions of traditional Earth-2 natives like Flash Jay Garrick and Green Lantern Alan Scott, only rather than being aged Golden Age heroes, they were young men whose careers were contemporaneous with that of Superman, Wonder Woman and Batman (all three of whom died in the first issue).

I haven't read past the first story arc (and the two awful Villains Month decimal point-ed issues), so I was a little lost as to what was going on in this issue. The dead Superman, returns to Earth wearing a new, evil Superman costume (all red and black) and proceeded to beat up this world's superheroes (called "Wonders") and kill "a god", whom I think is supposed to be the New God villain Steppenwolf. 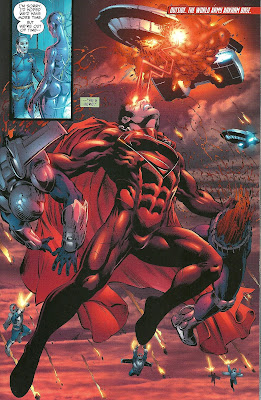 While the heroes fret over how to deal with an evil Superman, a new Batman, secret identity unrevealed, (and also wearing red and black) appears with a plan to stop Superman and save the world. Given the premise of Injustice, Batman fighting an evil version of Superman on an alternate earth maybe isn't the smartest place for Taylor to start his run, certainly not if he doesn't want to be pigeon-holed as the guy who only writes story about Batman fighting evil versions of Superman on alternate earths, anyway.

While this isn't a terrible jumping-on point, I was a little surprised that Taylor seemed to be picking up on a story in-progress (perhaps Robinson left extremely unexpectedly?), and there were a few characters I didn't recognize at all. The Flash, Green Lantern, The Sandman, The Atom, Mr. Terrific, Terry Sloane and Amire Khan all appear, as does the Dr. Fate and Red Tornado. There's also an archer character, whose identity I couldn't even begin to guess at. Oddly, there are little text bubbles and arrows identifying some of the characters, but among those identified are the most obvious characters, like Fate and the Flash. No bubble for archer-guy.

Oh, and this version of Red Tornado is a female robot. And she's Lois Lane, for some reason.

I feel the book has drifted pretty far from what seemed like its original premise—a brand-new, "Ultimate" Justice Society on a parallel world with no Superman, Batman and Wonder Woman—given that this issue featured Superman, Batman, Lois Lane-in-Red Tornado's android girl-body and Lois' dad, General Sam Lane.

Given the roughly ten million awesome Golden Age characters in DC's character catalogue, many of whom have some connection to the Justice Society, it would be nice to see pretty much anyone other than Superman and Batman in this comic.

The art is still quite strong though, thanks to pencil artist Nicola Scott, who has been drawing the book since it launched.
Posted by Caleb at 5:11 AM

The archer guy is Red Arrow.

Oh. He wasn't even in, like, my top five guesses, probably because of how little red he has on and that character's not that strongly associated with that Earth or the JSA.

I assume it's Roy Harper, due to the hair color...? And does he have a bionic arm? Did THIS Roy Harper lose his arm too? The poor bastard...

I don't even know, really. I'm basically just reading the book because Nicola Scott's artwork is so great.