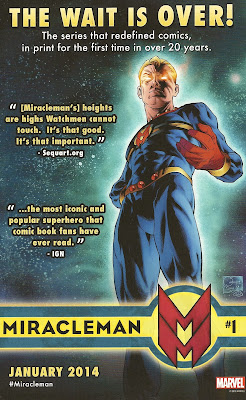 And as for "and popular"...? I have no idea what metric they might have used to determine that Miracleman/Marvelman was the most popular superhero that comic book fans have ever read, but I generally consider comic book sales, licensing revenue and "being a superhero that people might have actually heard of in their entire fucking lives" to be pretty good indicators of a character's popularity.

UPDATE: Please read the comments, where it is revealed whether it was IGN who said something dumb, or Marvel who misquoted IGN.
Posted by Caleb at 4:50 PM

I found the original article and it was a misquote. The real quote is "Marvelman might just be the most iconic and popular superhero that comic book fans have never read," which makes slightly more sense.

I have never read Miracle Man. Don't really care either.

Has the makings, to me, of something that the internet is way more excited about than the general comic-buying public.

Marvel's fueling speculation with all the variant covers, but I have a feeling this isn't going to be as popular outside the comicoblogosphere.

Thanks. What a difference a single letter makes, changing "never" to "ever."

I did google the whole phrase to see the original article, but the closest thing that came up was a list of the Top 100 superheroes of all time (which didn't include Marvelman or Miracleman). I guess that explains why.

I'm not sure which is more annoying to me, the misquote, or the 'MUCH BETTER THAN DC'S WATCHMEN BY DC' quote.