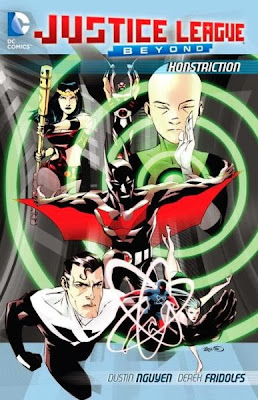 There's a scene during the denouement of this trade when the now-elderly Bruce Wayne finds his successor Terry McGinnis unconscious and naked as a result of the climactic, apocalyptic battle. Wayne tosses Superman's cape over him, like a rescue blanket, and when another character asks where he got that, Wayne says he took it from someone who wasn't using it anymore.

The appearance of Superman's cape here is sort of emblematic of creators Dustin Nguyen and Derek Fridolfs approach to their sprawling next generation Justice League story: No opportunity for a wink, nod or elbow to the ribs to DC fans is passed up, even when it comes to something as innocuous as using Superman's cape as a minor prop.

Set in the world of the 1999-2001 Batman Beyond cartoon, where a retired Bruce Wayne coaches college student McGinnis through an ear piece as the new Batman of Neo Gotham, Justice League Beyond includes an extrapolation of the 2001-2006 Justice League cartoon continuity as well (exhaustingly so, in the case of at least one of the back-up stories, which I don't want to discuss here).  The new Batman fights alongside a new Green Lantern, the daughter of Aquaman (Aquagirl, naturally), the son of Green Lantern John Stewart and Hawkgirl (Warhawk...not Hawk Lantern or The Green Hawk) and the original Superman and Big Barda, whose alien origins have kept them relatively young...they just dress a bit different in this generation.

The driving conflict involves the Kobra cult, which is employing a magic book and Boom Tube technology to summon a world-ending, giant super-serpent monster, an invincible Ouroboros, which rampages through the Multiverse for practice before turning its attentions to Earth.

Along the way, the League visits Dinosaur Island/the setting of the War That Time Forgot strips, New Genesis, Apokalips, Neo Gotham and Metropolis. The now elderly Amanda Waller and Jimmy Olsen are involved. All of the Fourth World characters of New Genesis and Apokolips unite with the League to try and make a stand against the serpent, most getting little more than cameos, but Highfather, Darkseid, Orion, Bekka (who Nguyen and Fridolfs previously drew in the Alan Burnett-written "Torment" arc for for Superman/Batman), The Female Furies and Mister Miracle having relatively large roles.

Cameos are made by Aquaman and Lex Luthor...and Kamandi, The Challengers of the Unknown and Atlas. Cadmus is involved early on, and Etrigan the Demon appears near the climax. The book reads an awful lot like a love letter to Kirby's contributions to the DC Universe and character catalogue.

Nguyen and Fridolfs, who co-write the story with the former pencilling and the latter inking, do a fine job of toy-box storytelling, perfectly structuring their story from a standard introduction of the characters in action to an ever-escalating threat, with the serpent defeating an entire planet of super-gods being the second act. The artwork is superb, and their voracious inclusion of as much of the DC Universe as will fit is appreciated, given the opportunities it presents them to draw their versions of, say, Steppenwolf or Oberon or a Batman Beyond villains or dinosaurs or what-have-you.

Several of the characters get new, temporary costumes, with Batman wearing a caped-version of his red-and-black uniform, Aquagirl putting on battle armor and Barda wearing a nicely modified version of her original, Kirby-designed armor (She usually just wears her Kirby-designed casual outfit: An interdimensional bathing suit).

The artwork is perhaps at its most fun during the scenes with the New Gods, as Nguyen's character designs seem to take their cues from both Mike Mignola, who drew many of these character's during 1988's Cosmic Odyssey (Particularly stout, brick wall of a Darkseid), and Bruce Timm's cartoon designs (Particularly for the Female Furies).

At the climax, as the U.S. Air Force Squad nicknamed "Hal's Hellions," the Green Lantern Corps and Thanagarian Hawkpeople join the Justice League in fight to the finish with the world-destroying snake-monster,  Batman flies a Bat-plane into action and remarks "Now this feels like a Justice League!" I was thinking pretty much the same thing; despite the new and different setting and the variations on so many of the characters, this story featured the ever-escalating stakes, world-building synthesis of generations of comics-makers and trivia-conscious care-taking that so many of my favorite Justice League stories have.

One complaint though: Jimmy's signal watch should go "ZEE ZEE ZEE" not "BEEP BEEP BEEP" though.

Okay, two: "Konstriction" is a pretty lame name for this storyline; it sounds awfully small given the scope and scale of the story. It's sorta about a Justice League vs. Kobra conflict, but it's more about all the heroes in the universe vs. an apocalyptic threat, in which case, I don't know, Justice League Beyond: Ouroboros might have been better. Plus, "snake eating its own tail" is pretty much a perfect symbol for a superhero story like this, isn't it? A comic book extrapolation of a cartoon adaptation/extrapolation of comic book heroes and concepts created generations ago?  This was a lot of fun and very well-made, but it's still a sterling example of serpent-devouring-itself comics-making.
Posted by Caleb at 8:20 PM