Despite my complaining about Diamond not shipping Wednesday Comics #3 to my shop yesterday, and the fact that I said I would probably just have to pick up #3 the following week along with #4, I actually made a special trip back to the shop today to get it—and a couple other books I forgot to get.

It was my day off today, and I was in the neighborhood of my shop today, and I didn’t have much to do (other than attempt to write maybe the dumbest Blog@ post I could think of) anyway, so I spent a second afternoon in a row reading and then writing about comic books. So here’s your bonus Weekly Haul feature. Enjoy!

Leave It To PET Vol. 2 (Viz) This is a couple of weeks old, but I left it on the shelf the first few Wednesdays on account of not having enough scratch to add it to my pile. Since I was in the shop on an off-day though, it seemed like a good time to pick it up.

This volume is only slightly less delightful than the first, in large part because this time I went in expecting the delight which came as such a surprise the first time I read a PET collection. Well that and the fact that since so many other super-robot servants made from recyclables to aid the person who recycled them were introduced throughout the course of the first book, manga-ka Kenji Sonishi has a larger pool of characters to work with here, but none of them are quite as engaging as PET himself.

This $8 digest (so…cheap!!) offers 18 more stories of young student Noboru Yamada getting into trouble and then turning to PET to help get him out of it, only to be disappointed when PET makes it much worse through his forgetfulness, clumsiness or general uselessness.

The highlight in this one for me was probably “I’ll Form The Head!,” a story in which PET and his sister Alu (a super-robot made out of a recycled aluminum can) combine to form new super-robots that are just slightly taller than their individual forms. Adding the length of an aluminum can to a super-robot with a plastic bottle for a body doesn’t really improve the functionality of the plastic bottle-based robot, you see.

Lockjaw and The Pet Avengers #3 (Marvel Comics) I think this one may actually be two or three weeks old, as I've forgotten to pick it up more than once. This is the Bo Obama guest-starring issue, although the First Dog plays a rather minor role, with most of the issue devoted to the Pets seeking two Infinity Gems underwater, awfully close to a slumbering Giganto. I only know that’s what those giant whales with arms and legs are called thanks to the Marvel Pets Handbook, which taught me more about the history and biology of the Gigantos than I will probably ever need to know. But if the subject comes up at a cocktail party, and I happen to be at that cocktail party, I’m ready!

Next issue they fight Thanos. My money’s on the pets, since they have a giant bulldog and a sabre-toothed tiger* on their team, and Thanos is just a big purple guy in a funny costume. Well, he probably has some super space-guy powers too, but man, I just re-watched Walking With Prehistoric Beasts again recently, and the sabre-toothed cats are fucking badass! Look out, Thanos!

Runaways #12 (Marvel) So I guess I took this off my pull-list during the Terry Moore run, and despite liking #10 and #11 a lot never put it back on, so when it came out yesterday it wasn’t placed in my hand by an employee of my local comic shop, which often leads to me forgetting a particular book is supposed to come out that week and neglecting to purchase it.

This is the second full issue of the all-new, all-female creative team of Kathryn Immonen and Sara Pichelli, and it’s an intensely character-focused on. Last issue some sort of mix-up with a Predator drone-looking plane or missile crashed their house and killed their coolest member, and their newest member, Clara, used her plant powers to encase all of the rubble in vines, trapping the team within.

The majority of this issue deals with the kids stuck in the ruined house, trying to figure out what just happened and what to do next, while bickering in such a way as to reveal various conflicts between one another. And then an adult family member enters the picture, which is never a good sign in Runaways.

Immonen cooked up a crackerjack cliffhanger, and the intense character-work was very well executed, with the perfect amount of melodrama (these are teenagers, after all). Artist Sara Pichelli proves herself quite gifted here, managing to make almost an entire issue of a super-comic devoted to talky-talky still feel dyamic, dramatic and engaging.

Runaways is now back on my pull-list, so I won’t neglect to buy it the next time it’s released. 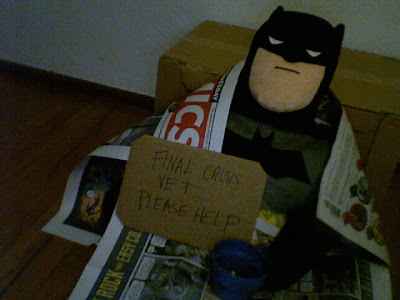 Kamandi: Still gorgeous, and getting gorgeous-er. Which is a word I just made up meaning “like more gorgeous, but more so.”

Superman: Superman continues to have a sad. Man up, Superman!

Deadman: So, so, so pretty. Part of this installment looked a bit like the opening credit sequence from a really cool movie from the ‘60s.

Green Lantern: Hal Jordan was planning on making a romantic dinner of lemon-dill marinated steaks for Carol Ferris tonight when he suddenly realized he was missing one of the key ingredients— 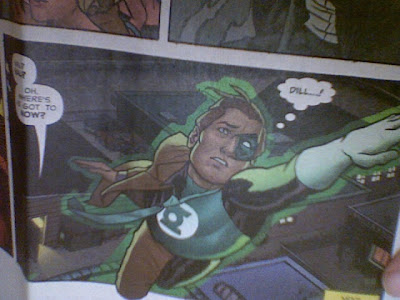 Metamorpho: Well this feature sure slowed down after the first installment.

Teen Titans: Yikes. I had to read the last three panels repeatedly to figure out what the hell was happening. I think Trident is either shooting water or an energy beam at the side of the flying submarine hospital ship, maybe? I thought he was piloting his own sub and ramming the other vehicle the first few times through.

Strange Adventures: The first two panels of this, showing the different ways in which the space baboon-men guard their two prisoners? Brilliant.

Metal Men: At this point, this is probably the most straightforward superhero story in the book, I think. It’s really great-looking, and its completely devoid of acts of cannibalism or sex crimes. Maybe this Dan DiDio character is unfairly maligned on the Internet…?

Wonder Woman: Okay, Ben Caldwell does lose some readability in this thing, particularly in panels seven through nine, where his dialogue bubbles blend into one big one, despite two people taking turns talking within the same bubble. I can forgive it given the experimental nature of the strip (and the project in general). That and the fact that this reads like one of the better Wonder Woman stories I’ve read that wasn’t collected in a hardcover Archives edition. The coloring’s pretty poor though, at least for this format and the size of these panels.

Sgt. Rock: This is Joe Kubert drawing things, which is really the only thing you need to know about it.

Hawkman: It turns out Hakwman isn’t just brutally fighting terrorists (check out the blood on his mourning star…that’s what should happen when your hero fights crime with a heavy metal ball covered in spikes), he’s brutally fighting aliens disguised as terrorists. If they did another round of Wednesday Comics next summer, you wouldn’t hear any complaints out of me if it consisted of fifteen strips all by Kyle Baker.

*So apparently you’re not supposed to call ‘em sabre-toothed tigers anymore, since they’re not tigers. The narrator kept calling ‘em sabre-toothed cats, which is more accurate, but is gonna take some getting used to.
Posted by Caleb at 6:51 PM

Batman is totally cuddly! I love the expression on his face. "Yeah, now I'm gonna have to start with the kidney punching."

saber tooth CAT just does not roll off the tounge as smoothly.

and homeless plush batman is too funny all wrapped in wednesday comics.

After reading a joke at the ISB about comics on sheets, that makes the already humerous Batman pic (the sign just makes it better) even funnier.