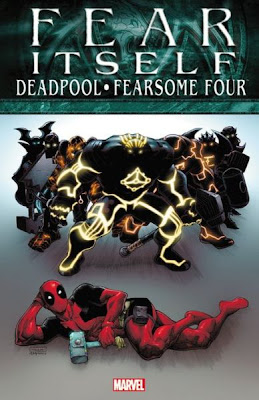 This collection does not feature a Deadpool/Fearsome Four team-up, as the title might make one think. Rather, it collects two separate and unconnected Fear Itself tie-in series: the three-part Deadpool series and the four-part Fearsome Four series.

This is the way Marvel handled a bunch of the tie-in minis, which at three-to-four issues were generally too short to fill up a sizable trade collection of their own.

There doesn’t even seem to be a lot of logic to the pairings either, as evidenced from this particular collection. The two miniseries have nothing in common with one another beyond both being Fear Itself tie-ins.

They don’t share any characters, the characters don’t share a franchise or family, no creators are involved in both stories (Contrast this collection to FI: Avengers, which collected two Avengers titles by the same writer).

It was the second half of this book that interested me, and convinced me to pick it up. That name may be borrowed from some old Fantastic Four villains, but the make-up of the thrown-together team include some of my favorite Marvel characters, locked in conflict with another of my favorite Marvel characters (Howard the Duck, She-Hulk, The Defenders’ Nighthawk and Marvel’s fur vest rocking Frankenstein team-up to take on Man-Thing).

The involvement of artists Michael Kaluta and Simon Bisley certainly didn’t make that series any less attractive, either.

But let’s start at the beginning, with Deadpool. Despite what I consider a rather valiant attempt on my part, I still don’t quite “get” Deadpool. I can see why other folks like him a lot, but he doesn’t really work for me, and I rarely if ever find him amusing. (Personally, I think he works best as either a villain or as part of an ensemble in a straight story, as in Rick Remender and company’s Uncanny X-Force, for example).

As the book opens, Deadpool and two contractors are installing a supervillian security system for a civilian couple, and just as Deadpool is boasting that it can keep Juggernaut himself out, the Juggernaut—now powered-up by his evil Thor hammer—runs in through one wall and out through another wall.

When the contractors’ van is blown up by a mysterious, furry person and the explosion showers the neighborhood with their tools, their hammer strikes Deadpool in the head and he comes up with a weird, circuitous plan I don’t quite remember the details of, even though I just read it.

When he hears about the magic hammers on the news, he decides to decorate the hammer that hit him on the head to make it look special, and then put it in the hands of a lame-o supervillain (The Walrus, whom I had to look up on the Internet to see if he’s original to this series or not; I just assume any Marvel villain whose name is simply that of an animal probably appeared in an issue of a Spider-Man comic at some point).

Then a disguised Deadpool follows The Walrus around, egging him on to commit villainy that he will eventually put a stop to. But, quite randomly, it turns out that the hammer is actually also a magical hammer, just not one of The Serpent’s hammers—instead, it’s an enchanted hammer used for fighting off werewolves, and the contractors were apparently also werewolf-hunters who were going to use it to stave off a werewolf invasion of a small, Arizona town.

The book is packed with jokes, verbal and visual, and several of them are MC Hammer jokes, which is about the level the humor in the series rises too—1990s Saturday Night Live.

I didn’t like anything about it, although Dazo’s art is of a professional quality, and is just cartoony enough to function as both serious superhero comic art and comic comedy art simultaneously. 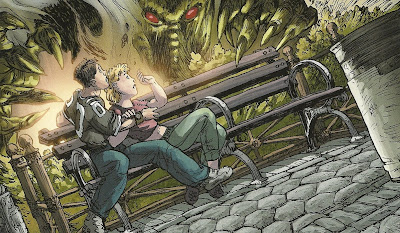 As for Fearsome Four, it’s written by Brandon Montclare (another writer whose name was unfamiliar to me, although I guess he wrote that not-that-great Halloween Eve one-shot that Amy Reeder drew for Image). And it's artwork? It's artwork is a complete fucking mess.

There are seven artists credited for the four issues, plus three additional artists given “with” credits. A lot of these artists are really great artists, the sorts of artists whose presence on a Marvel event tie-in is eyebrow-raising enough to get a casual reader to at least browse through the series and, incidentally, among some of my favorite artists and/or artists whose work I wish I could see on a monthly basis.

What the fuck went on with this series, behind the scenes, that lead to the weird hodge-podge of artists? I have no idea, but it certainly doesn’t work at all. Bisley is employed strategically, illustrating a section where Man-Thing uses his connection to the Nexus of All Realities to transform the heroes opposing him into monsters (or, in the case of Frankenstein, a more monstrous monster). The other artists come and go seemingly at random, and none stick close to any sort of character design—She-Hulk’s size and shape is just as amorphous as the all-muck swamp monster’s. 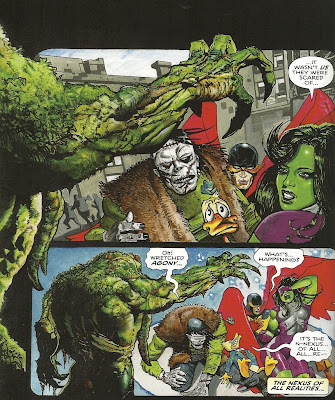 Howard the Duck, a character whose real-world history involves legal battles over his very design, looks different on an almost page-by-page basis, with Bisley the only artist drawing him in his original, pre-Disney legal noise version (before he’s transformed into first a duck monster and then a lizard monster).

His height, the size and shape of his bill, his clothes change from panel to panel.

Montclare’s plot at least addresses a question that Man-Thing fans might have wondered about when reading Fear Itself: How would a worldwide outbreak of supernaturally-inspired fear affect the mindless, emotionally empathic Man-Thing, who is drawn to snuff out fear by his own bizarre chemical reaction that immolates its source upon contact with his own body (You know, the whole “whatever knows fear burns at the touch of the Man-Thing” thing).

Man-Thing is in New York City and running amok: He’s getting bigger, he’s attacking at random and fires are being set all around him (of non-sentient things, so I guess all the fear powers him up…?). Howard The Duck is on his trail, wanting to get his old friend to calm down before he ends up hurting himself and/or destroying the city.

On the way, Howard runs into She-Hulk, Frankenstein’s monster and Nighthawk (the latter of whom is portrayed as a complete nut, fighting criminals by clawing at them with his fingertips). Dubbing them the Fearsome Four, they track and try to stop Man-Thing, but are opposed by Fantastic Four villain Psycho-Man and the old, temporary Fantastic Four of (Gray) Hulk, Spider-Man, Wolverine and Ghost Rider…either because including those characters helps justify the appropriation of the name “Fearsome Four,” or because having Spidey and Wolvie in your comic never hurts sales any. 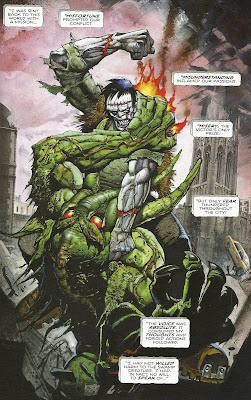 It’s a pretty terrible comic book, really, but is confounding in its bad-ness, given how much talent is involved (if you see this trade on a shop or library shelf, I’d still recommend picking it up, if only to see what a Kaluta Nighthawk looks like).

Much of that is due to the chaotic art, but the story is rather pointless, repetitive and meandering, and told surprisingly straight. It’s a very, very serious story, and how exactly one takes all those particular ingredients and comes up with an almost joke-free, deadly serious story is beyond me.
Posted by Caleb at 5:08 PM

When I read FI: Fearsome Four, I took the rapid-fire changes in art and character design to be indicative of Swamp Thing's uncontrolled reality-shifting powers. It still came off as kind of a chatic mess, though.

The Chris Hastings who wrote FI: Deadpool is the same guy as the writer/artist of Doctor McNinja, btw.