A lot of changes apparent from this month's batch of solicitations, for the books DC plans to publish in April of this year.

There were a handful of cancellations, including two of the five monthly ongoing books from DC I read—Paul Cornell and Ryan Kelly's Saucer Country (which comes as no real surprise) and Art Baltazar and Franco's Superman Family Adventures (which does; hopefully it was caneceled for the same reason their longer-running Tiny Titans was—to make room for a new Baltazar and Franco book). (For those keeping score at home, come April the only DC comics I'll be reading on a monthly basis are Green Lantern, Wonder Woman and the paper versions of the publisher's digital-first Legends of The Dark Knight series. See how easy they make it to switch from serially-published comics to trades?)

Perhaps most intriguing of this month's changes were those to the creative teams, which still seem to be house-of-cards precarious. Green Arrow will be getting its fourth writer in just 19 issues, and Birds of Prey it's second. The most hilarious creative shuffles, however, are those in which the already-announced writers were booted off their titles before they even began. Over a year into "The New 52," and DC doesn't even seem capable of maintaining the illusion that they know what's going on month to month with their line.

The Constantine pre-launch difficulties seem particularly unfortunate, given what a big deal it was that DC canceled Vertigo's Hellblazer, the longest-running Big Two title and the only of DC/Vertigo's original offerings that was still in publication, in order to move the character into the all-ages(-ish) DC Universe with a new title and a new #1. From the sounds of it, it looks like someone—writer and/or editors—changed their mind/s close to the last minute, and the new writers were chosen mainly because they were working on a team title that already included Constantine, which makes the book now sound more like a rushed spin-off than a really big deal relaunch.

Other trends? A lot of fold-out and MAD variant covers. All the solicitations are stripped-down simple, asking super-basic questions along the lines of "Who will Batman fight this month?" or "Who is kicking The Savage Hawkman's ass?" and so on.

For DC's full solicits I suggest you visit Comic Book Resources or ComicsAlliance. 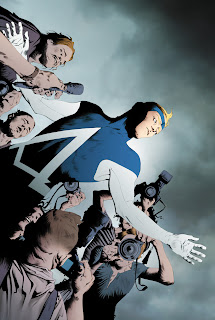 ANIMAL MAN #19
Written by JEFF LEMIRE
Art by STEVE PUGH
Fold-out cover by JAE LEE
On sale APRIL 3 • 32 pg, FC, $2.99 US • RATED T+
• As Animal Man's popularity grows, the paparazzi follow him everywhere. But is there one place he wishes they just wouldn't go?

I'm going to guess the bathroom.

I don't know if I've mentioned this, as I rarely see him wearing his costume on the covers of his book, but I really don't like the new Animal Man costume. Even if they were going to tinker with it, I think they probably should have left the goggles and color scheme. 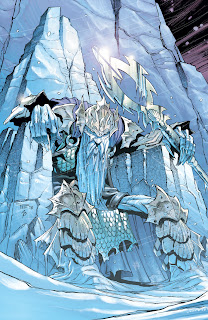 AQUAMAN #19
Written by GEOFF JOHNS
Art and fold-out cover by PAUL PELLETIER and SEAN PARSONS
1:25 MAD Variant cover by The Usual Gang of Idiots
On sale APRIL 24 • 32 pg, FC, $2.99 US • RATED T
Retailers: This issue will ship with two covers. Please see the Order Form for details.
• The Ice King takes the throne as the true king of Atlantis—but who will be the first to kneel before him? 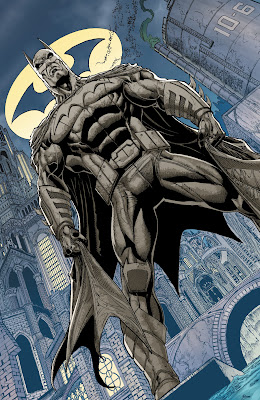 
BATWING #19
Written by FABIAN NICIEZA
Art and fold-out cover by FABRIZIO FIORENTINO
On sale APRIL 3 • 32 pg, FC, $2.99 US • RATED T
• Batwing quits—and what new member of the Batman family is ready to take his place?

You mean take his place as the so-called Batman of Africa...? Well, hopefully it's Freedom Beast, adopting the name Freedom Bat.

The only other Africa-based heroes I can think of are Vixen (maybe?) and Congorilla, but neither of those codenames integrate the word "Bat" into them as easily as Freedom Beast's codename does. Also, of those three he'd probably look the best in a cape. 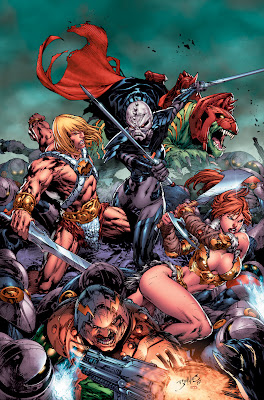 HE-MAN AND THE MASTERS OF THE UNIVERSE #1
Written by KEITH GIFFEN
Art by POP MHAN
Cover by ED BENES
1:25 Variant cover by TERRY DODSON and RACHEL DODSON
On sale APRIL 17 • 32 pg, FC, $2.99 US
...
• First exciting issue of the new, ongoing adventures of He-Man and the Masters of the Universe!
• While the Masters of the Universe mourn the loss of a fallen friend, Hordak infiltrates Eternia!
• Featuring the return of She-Ra! Now known as Despara, the most lethal weapon in Hordak’s army, she returns to Eternia as He-Man’s newest enemy!

Ugh. It's Ed Benes' Teela and, what I first thought to be an emaciated, off-model Hordak, is apparently actually the transformed She-Ra who is Hordak-ish from the neck up, but Barbie doll from the neck down, because of course she is.

I haven't read any of DC's He-Man comics (well, not since that one time they had him fight Superman), as they've made them seem incredibly unappealing with the publisher's usual creative team chaos (I believe James Robinson scripted one issue of a miniseries, before being replaced by frequent last-minute replacement writer Keith Giffen...?). I love He-Man though, and this is the exact sort of comic book I would have wanted to write when I was growing up.

These designs don't really sing like those of the He-Man reboot cartoon from the early aughts, and they just look like weirdly, randomly tweaked versions of the original toys (He-Man has a stripe of chainmail in is loin-cloth...? Teela is basically naked? What?). I like Pop Mhan's art, but I can't even imagine what his versions of these characters might look like—DC doesn't help me imagine by having Benes do the cover, either.

I have to imagine there's a lot of soul-searching following the realization that you can't sell vampires in the year 2013. 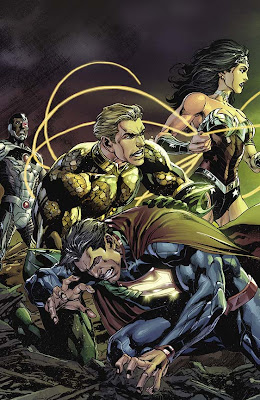 Superman's chest icon lights up now...? I didn't know that.

I like the way Ivan Reis draws Cyborg compared to the way Jim Lee drew him. He looks a lot more human, and his robot parts all look better proportioned to his body. Lee's Cyborg sometimes kinda just looked like someone stuck half a dude's face onto the side of a Michael Bay Transformer.

JUSTICE LEAGUE OF AMERICA #3
Written by GEOFF JOHNS
Backup story written by MATT KINDT
Art and fold-out cover by DAVID FINCH
Backup story art by SCOTT CLARK
...
On sale APRIL 3 • 40 pg, FC, $3.99 US • RATED T
...
Retailers: This issue will ship with four covers. Please see the order form for more information.
• A new Secret Society is forming-—but which of its members has the power to attack the Justice League from within?

It says something when you see the words "this issue will ship with four covers" and you don't think "My God, that's three covers too many!" but instead think, "Wow, four is a much more manageable, less insane number than 52." 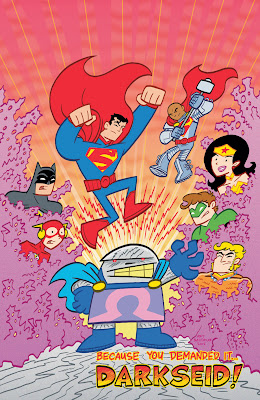 SUPERMAN FAMILY ADVENTURES #12
Written by ART BALTAZAR and FRANCO
Art and cover by ART BALTAZAR
On sale APRIL 24 • 32 pg, FC, $2.99 US • RATED E • FINAL ISSUE
• Because you demanded it! The return of the lunch lady! Er, we mean, the return of DARKSEID!
• Has he returned for good—or evil? Is he going to make us pancakes?
• When the Super Family leaps into action, will they be trapped in Apokolips?!

Hey, even though Baltazar's Darkseid is shaped like a fire hydrant, he still looks cooler than Jim Lee's redesign for Justice League!

Baltazar's version of the New 52 League look pretty cool here, actually—at least, what we can see of 'em (With the exception of poor Aquaman, whose sideburns are a little too Jericho). Maybe SFA is being canceled for a Justice League Adventures title...? 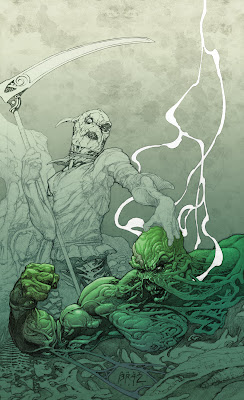 As much as I love The Scarecrow, I haven't read any of his New 52 appearances yet, as the only one I know of occurred in one of the worse-looking Batman books. I'm kind of tempted to check this one out though. I kind of wish I knew who Charles Soule was, which would make the decision a little easier to make. I guess I have three months to look him up on the Internet, huh? (15 seconds of research indicates he wrote the Image series 27, about the age a lot of rock stars died at, or whatever). 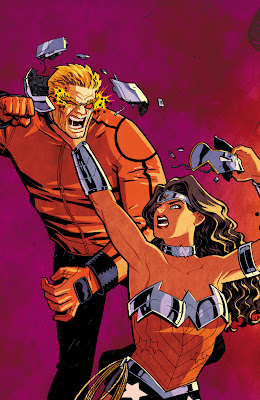 So, in the last issue of Wonder Woman that was published, Wondy and Orion were just about to start fighting one another. I guess four issues and three months later, they'll still be fighting...? What is this, Dragonball Z?
Posted by Caleb at 5:35 PM

Yeah, of course there`ll be another Franco and Baltazar-book...Of course...

Yawn. I`m tired of being cynical about the same things all the time.

Things do seem to be in disarray, don't they?