In the kitchen with Dan Zettwoch and Uncle Birdseye 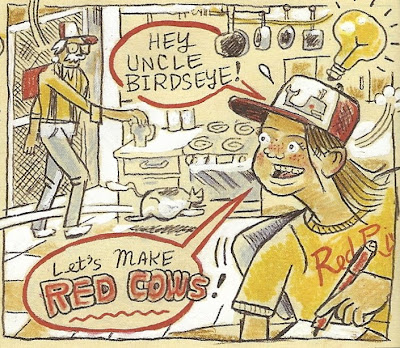 At the time, you may have thought to yourself, "How does Caleb know that was Uncle Birdseye's World Famous Red Cow recipe was the best beverage recipe from a comic last year, huh? What, did he make and try all of the beverage recipes he found in comics last year?" 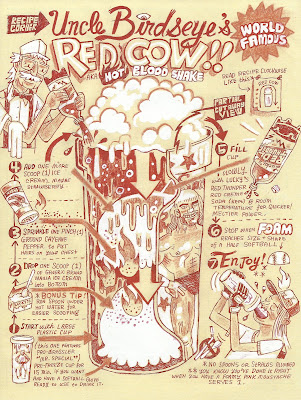 I did have a little bit of trouble securing the precise ingredients, as described in the illustrated seven-step recipe above.

I don't actually have any large plastic cup, with or without pro-wrestlers on them, so I used a large glass cup. Or a glass, as I believe glass cups are usually referred to. (For the Columbus residents in the reading audience: I imagine ComFest plastic beer mugs would be fairly ideal for Red Cow making).

For the ingredients, I used Giant Eagle-brand generic vanilla ice cream, which is hopefully generic enough, and did indeed use strawberry for the second scoop of ice cream. 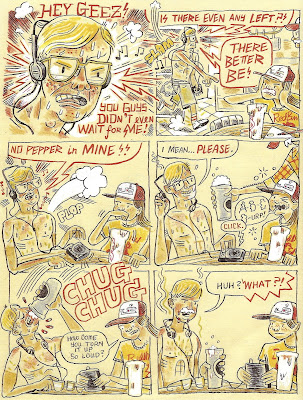 I opted not to use a pinch of ground cayenne pepper, just like Clint J. Murgatroyd (above) takes his. (The recipe says the pinch of pepper is "to put hairs on your chest," but I have more than enough hairs on my chest; in fact, if there were a spice that removed hairs from your chest by ingesting it, I would probably have thrown that in here. And/or on everything I eat and drink.)

Unable to find Lucky's Red Thunder Red Creme Soda, I had to go with Big Red, the only red pop at my local grocery store. 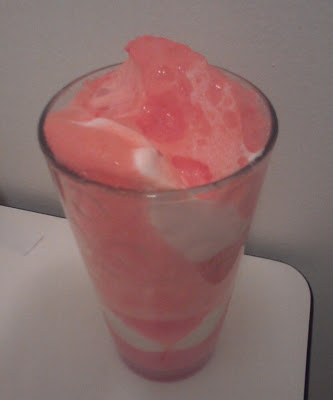 Not much like Zettwoch's drawing, I'm afraid, but that may be down to my using the wrong sort of cup and brand of red pop.

Step #7 was a bit difficult. Not the simple "Enjoy!" part, but the asterisks:


*No spoons or straws allowed

I tried drinking it one long draught, in order to generate a foamy pink mustache. 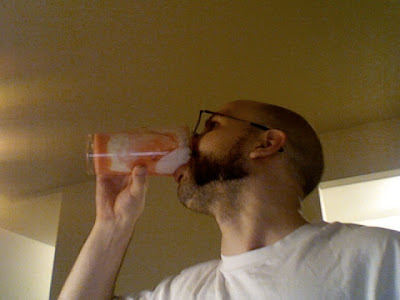 But I'm afraid the mustache wasn't as big and foamy as I expected from Zettwoch's drawings. Perhaps my own mustache repelled the Red Cow's foam mustache...? 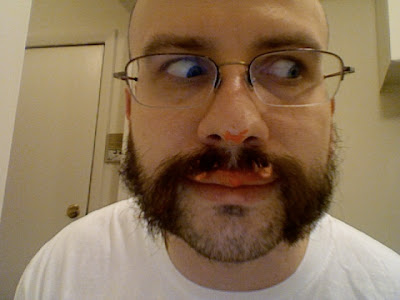 And perhaps it was a result of the narrower shape of my glass than the recommended large plastic cup, but I ended up with more foam on my nose than my upper-lip.

As for the Red Cow itself, it was a pretty-looking beverage, much prettier and pinker than your average root beer float, which it tasted an awful lot like, only more fruity than root-y.

And that was my experiment with Zettwoch's recipe.

I would recommend his Birdesye Bristoe without hesitation, but as for Uncle Birdseye's World Famous Red Cow AKA Hot Blood Shake? I suppose it depends on how much you like ice cream and red pop. Me, I prefer comics to both.
Posted by Caleb at 8:35 PM