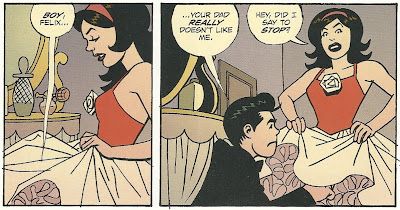 I did not make a New Year's resolution to contribute to Robot 6's weekly What Are You Reading? column on a more regular basis or anything, but I guess it kind of worked out that way, as this is the third week in a row I've managed it (My current plan is to keep doing that, and have links to it account for my Sunday night post, as I've quite doing links round-ups on Sunday afternoons, due to how much time it ate up doing so and due to the fact that I'm trying to constrain my link-blogging to Twitter...Oh, but hey, here's a good link).

The above image is from Criminal Vol. 6: The Last of the Innocents, Ed Brubaker and Sean Phillips' "What If...Archie Andrews Basically Killed Everyone?" story that is fairly nutty, but a nice example of superhero decadence applied to a non-superhero franchise, using such thinly veiled analogue versions of the folks from Riverdale that I think "veiled" may actually be too strong a term for it (That's the Archie analogue, who is differentiated from the genuine all-American teen by his hair color and lack of freckles, apparently fingering the Veronica analogue, who is differentiated from Archie's gal pal by, um, having a different name...and a dad who has a gray beard, instead of just a gray mustache).

Phillips also drew a panel in which the Betty analogue used the word "finger-bang," but I didn't scan that because it didn't make sense when divorced from the rest of the page, where as the "gag" in the sequence above translates well enough.

It's one of the comics I discussed there in addition to a few others not previously reviewed here, so click on this to see what Gambit and End Times of Bram and Ben writer James Asmus and Robot Sixers Michael May, Tom Bondurant and I read this week.
Posted by Caleb at 8:40 PM

I read about that comic some time ago, and thought that I could check it out. Haven`t, yet.