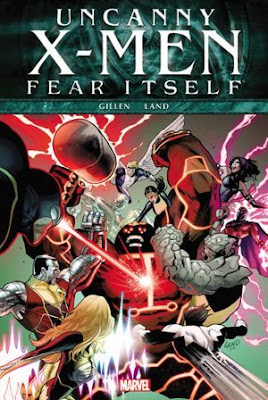 I wasn't sure if I would be able to read this one or not, seeing as how it features art by Greg Land, the anti-artist whose static, phony-looking panels do exactly everything wrong that one could possibly do wrong while trying to tell a story in the comics medium. An artist couldn't provide worse comic book art if they were actively trying too. Probably because if they were trying to create bad art, they would just render everything poorly, but Land's problems are much, much deeper--it's his staging, his character designs, his inability to "act" through his characters, its the way panels don't flow from one to the next, the way there's no visual continuity. That's on top of the poor rendering, and the lifeless, antiseptic world he creates by manipulating photoreference into finished product.

I want to say his work is unreadable, but I did make it all the way through an entire page collection of it (even if it did take me three tries to do it), so that's obviously not true. I suppose that's what come from reading as many bad superhero comic books over the years as I have: There's nothing that Marvel can throw at me that I can't make it through now.

This book collects five issues of the previous, since canceled-and-relaunched volume of Uncanny X-Men (#540-#544, if you care), four of which tie into Fear Itself. These comics are written by Kieron Gillen, who hear seems to know his stuff and at least be trying to tell a fun, action-packed story in the midst of what must be one of the angstiest (if not the angstiest period in X-Men history). I'm not sure I bought many of the supporting elements of the story, which seem to have been put in place because they had to be in order to get various pieces in place for the X-line's next few months of stories, and this story behaves a bit differently than the other Fear Itself stories I read (including, most importantly, Fear Itself itself), but Gillen does a pretty fair job on the script.

He is, of course, undercut constantly and at every turn by Land. I could scan just about any panel from any page to post and point at, but let's look at a few of the earlier and more egregious examples.

Here are four consecutive panels from the first issue, in which Piotr "Colossus" Rasputin and Kitty "Kitty Pryde" Pryde argue about the way the X-Men are treating his little sister Magic, who did something really bad in a previous story, and so is now being kept in an underwater prison: 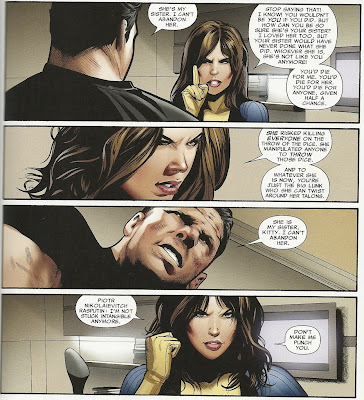 That's not important, for these purposes. What is. No, check out the Kittys in the first and fourth of those panels; not only has her hairstyle changed pretty dramatically—in length, volume and whether or not there's any curl to it—but her fucking face has changed too.

Two scenes later is one of the weirder scenes in the book. Namor has flown away from where we last saw him (Fear Itself: The Deep), changed from his current costume into his old Speedo costume, and then flown to see Emma Frost and tell her he'd like to fuck her one more time before he goes off to likely die in battle (I guess they did it in the recent past...? That guy has a thing for gorgeous blonds attached to tall, skinny, humorless super-team leaders, I guess).

Check out how his body morphs between these two consecutive panels: 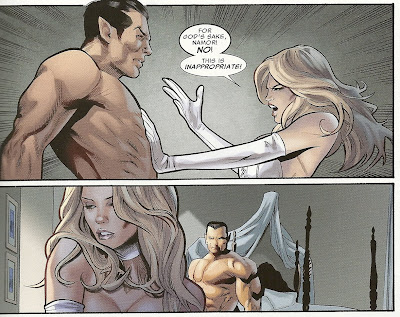 So, Greg Land: Still the worst.

As one of The Serpent's Worthy, the guys who got evil magic Thor hammers that made them more powerful and also evil thralls, is X-Men villain Juggernaut, that's the part of Fear Itself that Gillen ties his story into.

The Juggernaut flies through the air to crash like a meteor near a gas station which has only one ad on its window, and it's for Orbit (Orbit sponsored this story arc, I guess; there are multliple Orbit logos in the art. Weird Marvel can't sell normal ads anymore, but they can find customers for their bizarre product placement ads: "No, we won't buy a half-page ad, but how much would you charge us to have someone cut-and-paste an image of our logo onto a billboard that the Juggernaut can throw an X-Person against...?")

There he touches his hammer to the face of a bystander, which tattoos the Fear Itself logo onto that guys face, and then transforms him into a sort of hype-man for the Juggernaut. Then Juggernaut proceeds to walk very slowly towards San Francisco, every one of his footsteps leaving a glowing pink Nordic-looking rune on the ground like a footprint, something that the other Worthy don't do in the other comics, but will prove important (or, at least "important" at the climax).

Meanwhile, the X-Men are pretty much just chilling around San Francisco, wondering how weird it is that the rest of the world is going to hell while everything seems pretty chill in San Fran. Being shitty, selfish superheroes, they decide to just hang around and wait to see if their neighborhood gets attacked by an apocalyptic threat, rather than, I don't know, lending a hand anywhere else (Not all the X-Men suck, of course; Wolverine and all his teams were already engaged in combating The Serpent, Namor and Psylocke popped up in other tie-ins I read this week).

After Scott "Cyclops" Summers trades some quips with Sadie Sinclair, the apparently 22-year-old mayor of San Francisco (in the Marvel Universe, anyway), it becomes apparent that the Juggernaut is headed their way, and they will need a joint response to deal with them.

The bulk of this collection consists of Cyclops throwing various mutants and combinations of mutant teams at the unstoppable foe—made more unstoppable by his magical upgrade. It reads an awful lot like Gillen looking at the list of 200 or so X-people he must have somewhere, thinking about their powers, how they might be creatively employed, and how a magic Juggernaut would remain un-stopped by those powers.

Eventually, the consult the one mutant who knows a lot about magic, identifiable by the fact that she is, of course, named Magic, and she, Kitty and Colossus go to hell to convince the demon that originally empowered Juggernaut that Juggernaut has betrayed him by serving the Serpent instead, so that demon takes away Juggernaut's power and is going to gift/curse it to Magic, when Colossus nobly steps in and decides to bear the burden of the curse instead.

For some reason, he then gets his own Juggernaut hat (I thought Juggernaut just wore that hat so Charles Xavier couldn't screw with his mind...?), and returns to earth to have a Juggernaut-off with the old Juggernaut. Spoiler: Colossus wins.

A couple of franchise-specific ramifications emerge from this story, which obviously has very little to do with Fear Itself (though the good guys win here, just as Dracula's forces defeated the Hammer-ed up Hulk at the end of Hulk Vs. Dracula, apparently it's only a very temporary win, as The Worthy are all in the climax of Fear Itself).

Firstly, Colossus is now Juggernaut II or whatever, which causes Kitty Pryde to dump him in a hilariously melodramatic scene where she angrily tells him, "You'd have sacrificed yourself rather than risking anyone else...It's great that you're willing to die for me, Pete. But I need someone who's willing to at least consider living."

See, she's pissed at her boyfriend for nobly risking his soul and his life to save his little sister from a fate worse than death and, in the process, saving the X-Men (and mutantkind, given their limited numbers) as well as the entire greater San Francisco metropolitan area. His girlfriend would have preferred he acted selfishly, and thought of himself and his own personal safety first.

So I guess Kitty probably shouldn't be dating in the superhero community, if she's so against heroic behavior. And I guess that means she's still being written as the readers' ideal imaginary girlfriend....?

And then Cyclops has a telepathic student of his hijack the mayor's body and temporarily paralyze her while he threatens to murder her and make it look like an accident for about two pages. Which must Example of Cyclops Being An Evil #19 that I've read, and I'm an awfully casual reader of X-Men comics.

The final issue has nothing to do with Fear Itself, and was fairly weird. 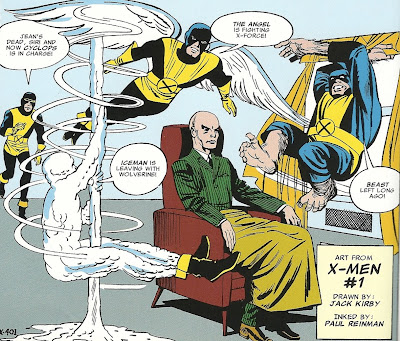 There's a strange opening page where Jack Kirby art is appropriated and new dialogue added for a refreshingly bizarre page (although I'm not sure how I feel about Kirby's art being used posthumously like that and, the more I think about it, the more uncomfortable it will likely make me). 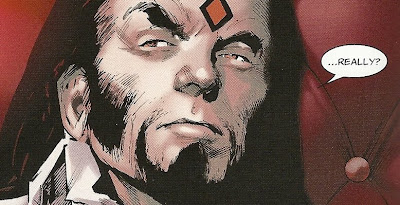 And then there are scenes of a new look Mr. Sinister writing X-Men comics with a flying, voice-command ink pen and doing something that involves dying and being reborn in the same body or...something. He has a very poor beard; if he's not going to connect his muttonchops to his goatee, he might as well just shave. To beard or not to beard is the question, Mister; you can't leave such a tiny space un-bearded!

The Sinister scenes are intercut with scenes on Utopia, in which original X-Men Iceman and The Beast tell Scott to fuck-off in their own ways. Iceman is drawn wearing boots in his iced-up form, which makes him look even more naked than when he's not wearing any clothes.

Land draws Beast like Mr. Tawky Tawny, resembling a dude in a suite form the neck down, but with a big cat head. This is probably because to draw a huge cat-man in a suit would require Land to abandon his reliance on photoreference; he solves the problem by just giving Beast a normal human body, and avoiding drawing him as much as possible. 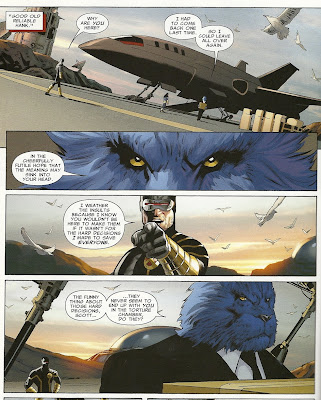 Extreme long shot, extreme close-up on his eyes, and one medium shot in which you see his face and shoulders. Whew!

I'll leave you with an image of Colossus, Kitty and Magic having furious hate-sex with a giant devil hand:

Why you keep readinng these horrible, horrible comics, is beyond me.

But at least the result as funny reviews.