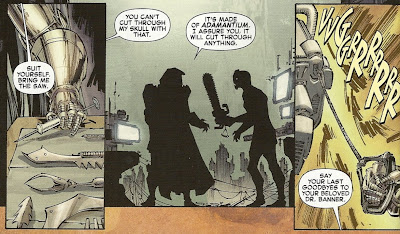 There's plenty of new Caleb-writing-about-comics content on the Internet today, just not here at Every Day Is Like Wednesday.

I have a review of Craig Yoe's awesome anthology Comics About Cartoonists at Las Vegas Weekly. It's just what it sounds like: A collection of comics covers, strips and gag-panels from a who's who of the greatest cartoonists in comics history, the subject of each being the cartoonists themselves (Some are autobiographical, some simply feature cartoonists as their protagonists, as in a Jack Kirby-drawn romance comic).

Speaking of Yoe, I have a review of The Art of Betty and Veronica, which he co-edited with Victor Gorelick, at ComicsAlliance. (Do click on that link, even if you don't want to read all my words about the book; it's well worth skimming just to see all that great art from the likes of Bruce Timm, Norm Breyfogle, Dan DeCarlo and others).

And, finally, at Robot 6, I wrote about Incredible Hulk By Jason Aaron Vol. 1, which is where the above image is taken from (I'd tell you who drew it, but I have absolutely no idea who drew it; there were something like 19 credited artists contributing to the comics it contained).

I don't know that the above sequence is the best part of the entire Hulk book, which has a lot of cool stuff in it, but I was pretty excited when that one character pulled out an adamantium chainsaw. Why doesn't the adamantium chainsaw guest-star in more books, or even have its own book at Marvel yet? They could call it Adamantium Chainsaw. If there is a more bad-ass title for a Marvel comic book than Adamantium Chainsaw, I'd sure like to hear it.
Posted by Caleb at 7:27 PM