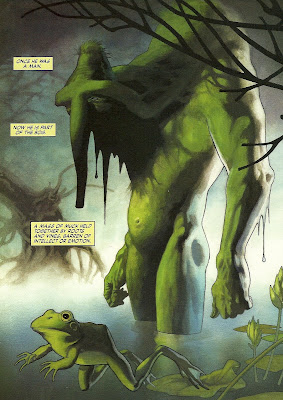 I participated in this week's edition of "What Are You Reading?" at Robot 6, making it two weeks in a row! That's my personal record for managing to participate in the blog's weekly feature, I think. I kinda-sorta reviewed two books there that I won't be reviewing on EDILW, if you want to go check it out (Also, other Robot Sixers Brigid Alverson, Corey Blake, Tom Bondurant, Mark Cardwell and special guest Brian Cronin run down their recent reading).

The above image is Kevin Nowlan's painted Man-Thing, from the pages of The Infernal Man-Thing, which was a rather disappointing book. I didn't really care for Nowlan's emaciated, extremely human-looking Man-Thing...looks a little like what Man-Thing might look like if recreated by a theater company for a stage show, doesn't it? (For contrast, compare it to Arthur Adams' Man-Things or Men-Thing from the covers of the same series).

And this here is maybe my favorite panel from the other book I discussed there, Star Wars Omniubs: A Long Time Ago... Vol. 2: 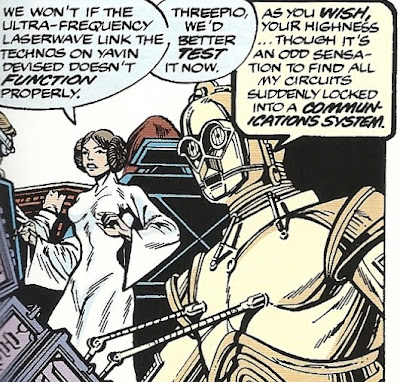 Note how artists Carmine Infantino and Gene Day render Leia's outfit from the original film; it's basically the same in design, but apparently made of spandex, superhero-style "boob socks" and all.

Also, in the plot for this story, Luke and R2-D2 are on the surface of a planet doing some diplomatic stuff, and the rest of "the Star Warriors" (as they're so often-referred to in these late-70s/early-80s comics) are aboard the Millennium Falcon, listening in by hooking C-3PO's nipples up to the on-board computers.
Posted by Caleb at 5:05 PM

Great description, Caleb. Nowlan's Man-Thing was definitely "off," but I could only see it in terms of details: upright posture, absence of gnarly, rooty bits, etc. You've neatly wrapped it up in one image.