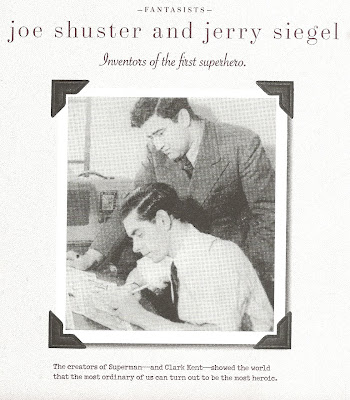 The only prose of Brad Meltzer's that I have personally read were his contributions to the 2004 Sean Howe-edited essay collection Give Our Regards to the Atomsmahers: Writers On Comics and the 2001 collection The Games We Played: A Celebration of Childhood and Imagination, so I'm not exactly expert in his non-comics writing. That's why I didn't know of the existence of his 2010 Heroes For My Son and 2012 Heroes For My Daughter until I happened to be in the same aisle of the library as them the other day.

The premise of the books is pretty much right there in their titles. Upon the birth of his son, Meltzer started thinking about the wisdom he would pass on to his first child, and he soon began thinking of remarkable individuals who possessed and expressed particular virtues he hoped his son would possess. He came up with 52. And then another whole book of examples.

The books are sweet, and of the graduation gift sort. After the introductions (the intro in Son has a pretty funny anecdote involving Meltzer's grandfather telling him the same four-sentence story about Batman and Robin over and over again), there is a photo of a hero with a two or three sentence biography of them, followed by a page telling a particular anecdote about that hero, and what exactly makes the heroic. As a sort of page punctuation, there's a quote from each.

The figures included are generally the sort that you might expect a grade-schooler to write a report on at some point, ranging from historical figures to pop artists to athletes to people who made the news for something extraordinary to members of Meltzer's own family.

Knowing that Meltzer has written for DC Comics in the past, and that he holds enormous affection for certain comic book superheroes (thanks to his essay in Atom-Smashers), I checked both books out to see if any of those heroes turned out to be superheroes, or the people who created those superheroes.

It turns out, I didn't have to skim long. The third entry was "Joe Shuster and Jerry Siegel, Inventors of the first superhero" (See the image above).

Here's Meltzer's entry on the pair, in its entirety:

And they were so poor that they used to draw on the back of butcher's paper.

But they were two best friends.

At the brink of World War II, in the midst of the Great Depression, two kids from Cleveland didn't just give us the world's first superhero.

They gave us to something to believe in.

The quote at the end of their entry, by the way, isn't a quote from "one of the first rejection letters for Superman,": "The trouble with this, kid, is that it's too sensational. Nobody would believe it."

So that was pretty cool of Meltzer.

Siegiel and Shuster were the only comics creators in either book, which, I should note, includes women in Son and men in Daughter, although there are plenty of folks around the fringes of comics, mixed in with more obvious candidates like Martin Luther King, Thomas Jefferson, Helen Keller and Rosa Parks.

It`s about time I read something else about Meltzer, that isn`t about that horrible JLA-story.