A few ads of note from this past week's comics: 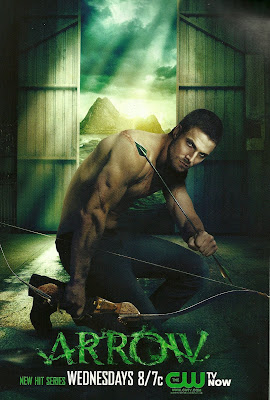 I love how upfront The CW is with the main appeal of their new-ish Green Arrow television show.

I wonder if Arrow might garner greater ratings if instead of changing Green Arrow's superhero name to Arrow, they had instead called him Shirtless Arrow...? Or perhaps Bare-Chested Arrow...? Maybe Naked-From-The-Waist-Up Arrow...? (They would also need to modify his costume accordingly, of course). 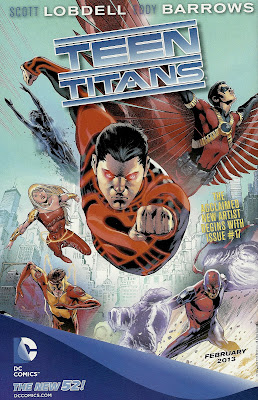 Not trying to be a jerk or anything, but I honestly can't recall every seeing anyone saying anything so positive about artist Eddy Barrows that could be construed as "acclaim."

I'm certainly no fan of his work, but, that said, based on this image alone, Teen Titans seems like it will be ever so slightly improved by his presence. The costumes are all still high aesthetic crimes (and they all pretty much match too...? What's up with that...?), but this image isn't anywhere near as repellent as many of the other Teen Titans covers I've seen since the New 52boot.

That was one of the nine house ads I saw in Green Lantern #15 this week (all of the ads were house ads, save one for The Kubert School and one for Geek magazine, which features DC's superheroes on its cover in the ad). Of those nine, 1/3 were trumpeting new creative teams as if those were positive things, and not a sign of some sort of behind-the-scenes creative chaos in the not yet a year-and-a-half old comics series (In addition to Teen Titans getting a new artist, ads for Green Arrow #17 and Demon Knights #16 proclaimed their new teams; the other ads were for Justice League of America #1, Before Watchmen: Dollar Bill #1, Animal Man Vol. 2, Earth 2 Vol. 1, the "H'El on Earth" crossover in the Superman titles and the new series Threshold...if that is indeed its real title). 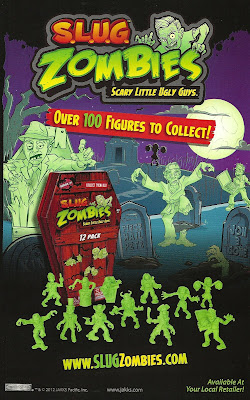 Exactly how is it that we've gotten this far into our culture's still-surging zombie craze and no one thought to make collectible zombie figures in the style of the pink MUSCLE figures of my youth until now...?

It's too bad these SLUGs are using the color green. I always thought it would be awesome if DC Direct did a line of 7,200 Green Lantern Corps toys in this same style, featuring every single member of the Corps in green, MUSCLE-like form.

I would LOVE to have dozens and dozens of little glowing Green Lanterns!

I'm personally thinking H'el on Earth will leave Superboy permanently wearing Superman's costume with the high collar while Superman gets a redesign to something matching the upcoming movie.

Considering Wonder Girl's costume is far better than any of the crap she wore in Geoff Johns' Teen Titans, that really only leaves Kid Flash and Red Robin in need of redesigns.

Also, the recent RHatO/Teen Titans crossover kind of makes me mindful of the fact Solstice is basically a black repaint of old Starfire.