Marvel released their solicitations for the books they plan to release in April on Friday. Would you like to read them? You can do so at Comic Book Resources or ComicsAlliance.

Would you like to read my thoughts on a couple of 'em? Well, I won't stop you. 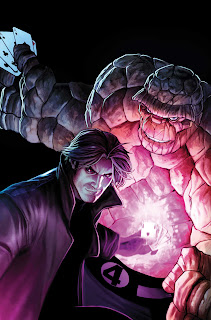 "Ever-lusting"...? Are Thing and Gambit gonna do it? Will this be Marvel's first official slash-fiction comic...? 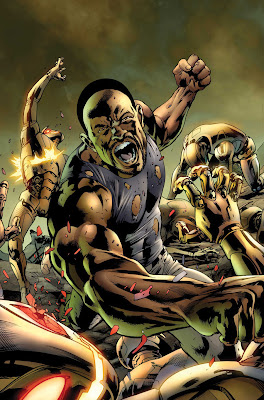 So is Luke Cage wearing an ill-fitting (or perhaps poorly-drawn) skullcap on the cover of Age of Ultron #4, or is that meant to be his hair, and he's got some kinda crazy top-knot, with the top-knot itself cut off...? Anyway: Weird looking image of Luke Cage punching out robots.


AGE OF ULTRON #5
BRIAN MICHAEL BENDIS (W)
BRYAN HITCH (A/C)
...
• The super hero survivors of the Ultron devastation follow a trail to the Savage Land in the hopes of finding a way to survive or turn the tide of the Ultron apocalypse.
• But with half the Marvel heroes dead, what chance do any of the survivors have?
• The choice that will forever change the course of Marvel history...!
32 PGS./Rated T+ ...$3.99

Wwwwaiiiit a minute. A significant portion of an earlier Marvel event/crossover series written by Brian Michael Bendis (that would be Secret Invasion) was spent in the Savage Land. Aren't there any other locations in the Marvel Universe...? 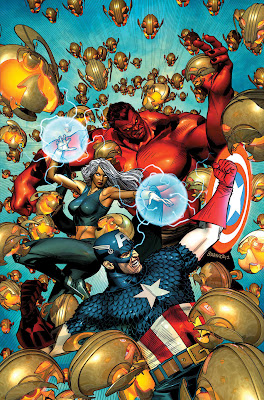 Ultron has turned himself into some sort of swarm of giant Pac-Man heads in Age of Ultron #6...? That's kind of cool. 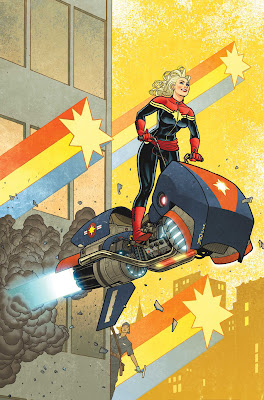 CAPTAIN MARVEL #12
KELLY SUE DeCONNICK & CHRIS SEBELA (W)
FILIPE ANDRADE (A)
Cover by JOE QUINONES
...
• The issue that will kick off a Major Captain Marvel and Avengers event!
• Still grounded from flying, Captain Marvel takes on a different and dangerous kind of bird—DEATHBIRD!
• Handicapped, but determined Carol risks her powers and her life!
• PLUS: The unstoppable evil that's been pulling Deathbird's strings!
32 PGS./Rated T+ ...$2.99

I like this cover. Especially the rainbow-streaming Captain Marvel symbols.

I don't think you can capitalize the word "major" if you're going to use it right before the name of a superhero codenamed Captain Something-or-Other. 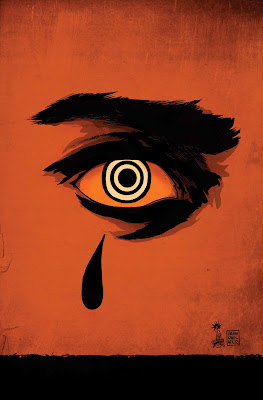 HAWKEYE #10
MATT FRACTION (W)
FRANCESCO FRANCAVILLA (a/c)
...
• The most acclaimed new book of the year continues!
• Who pulled the trigger?
• Where have you seen him before? Have you seen him before? Maybe. But not like this.
• It's murder, mayhem, and greasepaint make-up for the money, kids -- and that means playtime is over, Monsieur Hulot. Caw caw.
32 PGS./Rated T+ ...$2.99

Oh no, another artist on what seemed like it was going to be a Matt Fraction/David Aja joint? My fears for this title are coming to pass! Well, at least Francavilla is another good artist. 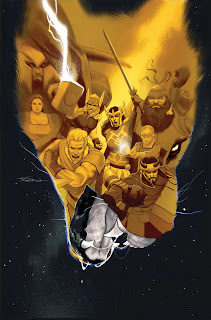 JOURNEY INTO MYSTERY #651
KATHRYN IMMONEN (W) MATTEO SCALERA (A)
Cover by JEFF DEKAL
• Mayhem in the mess hall! Horror in the hash house!
• Volstagg's daughter, Hildegund, only wanted a midnight snack! But something else is rampaging in the lower kitchens of Asgardia and she's going to have to wake the whole house to fight it.
• Sif! Thor! The Warrior's Three! Heimdall's dog! All join forces to chain this beast once and for all. Unfortunately, everything they need to do it? Never EXISTED!
32 PGS./Rated T+ ...$2.99

This solicitation text excites me. And look, it's only $3! I think I'll try this issue out. If I remember to, come April. 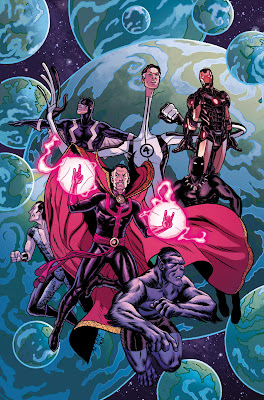 I think this is Joe Quinones's variant cover for New Avengers #5. I like how weird and off so many of these guys look. 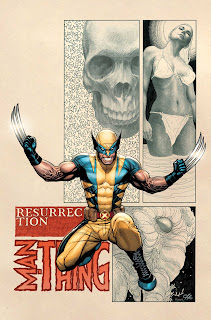 SAVAGE WOLVERINE #4
FRANK CHO (W/A/C)
Variant Cover by TBD
• Enter: MAN-THING!
• The Savage Land holds many secrets, among them what could be the key to resurrection...but at what cost?
32 PGS./Parental Advisory ...$3.99 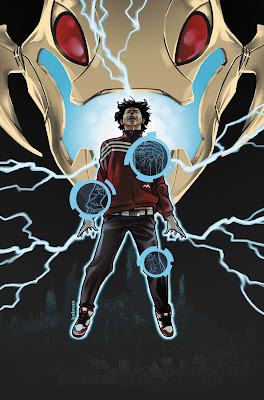 What?! The writer is "TBD"...? Then who came up with plot for this one-shot, featuring a character from Runaways...? The artist? Is it written in the old Marvel manner...?

A "TBD" credit given just a few months before an issue is set to ship never inspires confidence, but generally Marvel only uses it for artists, not writers. Hopefully it's just an organizational issue; like, they already have a script written, but they didn't let whoever put the solicitations together know who it was in time to send these out. 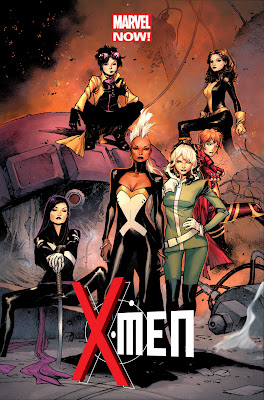 X-MEN #1
BRIAN WOOD (W) • OLIVIER COIPEL (A/C)
...
Because you demanded it! The X-Women finally get their own book, from critically acclaimed superstars Brian Wood (X-MEN, ULTIMATE X-MEN, DMZ, The Massive) and Olivier Coipel (AVX, HOUSE OF M, THOR)! An old enemy shows up at the X-Men's door, seeking asylum from an ancient evil come back to earth. Meanwhile, Jubilee has come home, and she's brought with her an orphaned baby who might hold the key to the earth's survival...or its destruction. Against a backdrop of what seems like an alien invasion and an eons-spanning war between brother and sister, Storm steps up and puts together a team to protect the child and stop a new threat that could destroy all life on earth!
32 PGS./Rated T+ ...$3.99

Wait, I don't get it—why is the book called X-Men...? Isn't that title weird enough for a mixed-gender team, as the X-Men were from their very inception, but when the team is completely man-free...?

I know some smart folks who are excited about this title's very existence, but I think the fact that it's being sold as an all-female team is a sign that this sort of is unusual, and that there is still an egregious gender imbalance among superhero comics.

I'm sure it will be pretty okay though, right? I mean, Wood's supposed to be a pretty good writer and all, right? And Coipel's a pretty good artist (Although if Marvel ships this every 14-21 days, they will need a second artist right quick anyway).

Who is that X-lady in red...? Is that one of Cyclops and Jean's many time-lost future children...?
Posted by Caleb at 1:55 PM

As a matter of fact, yes! The woman in red is Rachel Grey, a telepathic/telekinetic daughter of Cyclops and Jean Grey from a future where she was a 'Hound' for- oh, who cares.

Maybe if it were a follow-up to Manara's X-Women. Maybe.

Marvel couldn't have found a female writer and female artist to have produced this? An all-female X-Men comics sounds like a fantastic idea, but unfortunately, in the usual comic book industry way, they manage to fumble the ball slightly

"What?! The writer is "TBD"...? Then who came up with plot for this one-shot, featuring a character from Runaways...? The artist?"

The editors, I'm sure. Same people as come up with the plot of every event tie-in and spin-off.

My problem with Captain Marvel is the interior art. It's really, really awful. The covers are completely misleading.