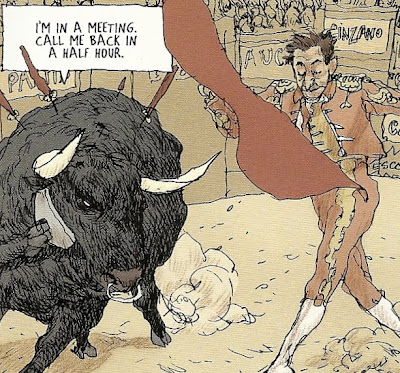 As completely repulsive as I find bullfighting, the above image is probably my favorite single one from Nicolas De Crecy's Salvatore Vol. 1, a graphic novel I reviewed for Good Comics For Kids a little earlier in the week (which you can read here, if you like).

The only new comic book-comic I read this week (you may have noticed the lack of a new edition of "Comic Shop Comics" last night) was Injustice: Gods Among Us #1, which wasn't nearly as terrible as I expected, and turned out to be the very best of the first issues of comics series based on video games based on DC characters that I've read (a small, shallow pool to be sure). I wrote about it for Robot 6, focusing mainly on the costuming and design, and wondering how closely adhered to the New 52 designs, as the video games-for-grown-ups and the New 52 both seem to court the same older teens and adults audience at the expense of the younger teens and kids demographic. Anyway, words and scans pertaining to Injustice here.
Posted by Caleb at 2:38 PM

I am working my way through Wet Moon. Onto six now. Not quite there yet. Still have a lump in my throat from the end of five. But soon.