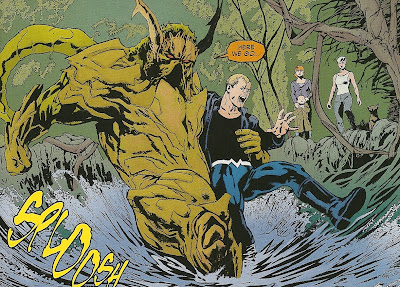 A couple months back, after belatedly reading Batman Vol. 1: The Court of Owls, one of those trades I decided to wait for and actually got around to actually purchasing and reading, I was eager enough to find out what happened next that I wanted to read the next volume immediately, which mean finding it at a library (at that point, no trade was yet available, just a hardcover). I was a little surprised to find two different titles that looked like they might be the next volume, Batman: Night of Owls and Batman: City of Owls. I requested the former before realizing the difference: Night was a big, fat collection containing all of the "Night of the Owls" tie-in stories from across the Batman line of comics, while City was actually the next volume of Scott Snyder and Greg Capullo's Batman comic (the latter officially has a "Vol. 2" in the title, although that was missing from several of the library catalogs I searched).

So Night contains all the issues of Batman and Robin, Nightwing, Batgirl, Batwing and so on that had their own brief stories—generally just an issue, maybe two—that tied-in to the "Night" story arc. I was pretty surprised to find it contained four issues of the Snyder/Capullo Batman title, and the first New 52  Batman Annual (co-written by Snyder), as those seem like they would be issues that should be collected in the second volume of Batman, not in this huge, companion/check-list collection.

I remember thinking that was pretty weird at the time, but ultimately just assuming DC must have chosen to collect those there because they thought the book wouldn't make sense otherwise without them (Similarly, DC has just released Batman Vol. 3: Death of the Family and Joker: Death of the Family and are starting to release all of the Batman books that had "Death of" tie-ins, most of which take "Death of the Family" as their sub-titles; all of them that I've seen so far include Batman #17, the final chapter of the story, because that provides the conclusion to the cliffhanger ending of many of the tie-ins.)

But then in September, I read Animal Man Vol. 3: Rotworld: The Red Kingdom, a trade paperback collecting what, at the time, sure seemed to be most of the Animal Man/Swamp Thing crossover story "Rotworld," which contained eight issues of Animal Man and two issues of Swamp Thing (Pretty much a complete story, save with a rather important-seeming section in which Swamp Thing acquires a weapon that will save the day and, therefore, reads like a pure example of deus ex machina).

This month DC released Swamp Thing Vol. 3: Rotworld: The Green Kingdom (not sure why there was such a delay between the two, as they occur simultaneously, and tell the same story from different points of view). That contained seven issues of Swamp Thing and two issues of Animal Man. The way the story is structured, the two characters meet at the beginning, journey to Rotworld together, are separated from one another for a stretch of time, and then reunite at the climax. And, while I didn't count pages, a lot of material appears in both collections, because it is necessary to the story, although neither story is actually a complete one (remember what I said about Animal Man Vol. 3), without the missing parts.

It's a very strange way to collect these comics which, when they were originally published serially as comic books, they crossed-over with one another in a Superman triangle sort of way—you would read an issue of Animal Man, then one of Swamp Thing, then one of Animal Man, and so on. The entire point of such a publishing strategy, when it comes to the serial comics, is that it encourages readers of Animal Man to also pick up Swamp Thing, and vice versa (and, hopefully, readers of one will like the other enough to keep reading it when the crossover ends).

But the way the trades are published, they seem to be collected under the understanding that those who read Animal Man in trade probably won't also read Swamp Thing in trade, and vice versa (Which likely isn't true; aside from this storyline, the books share a lot of common ground, including starring characters who went from quirky DC superheroes to dark, mature horror titles under the Vertigo imprint, to recent New 52/DCU emigres; both are also written by Vertigo writers-turned-New 52 breakout stars).

So, if you are reading both titles in trade, and certainly that's what DC would want you to do, if you're not reading them both in serial, comic book form, then you're getting a significant overlap of material in the two trades, which has to be frustrating giving the cost of a graphic novel these days (These are $17 a pop).

So say you do buy and read both of these series in trade and you learn that these two volumes will mostly feature material in both, what do you do? Well, you could obviously just buy one, but there's still a problem, as their contents are mostly identical, but not completely so.

If you skip the Justice League trade, you'll miss two issues of Justice League (a Tony Daniel-drawn two-parter in which the League fights The Cheetah and Wonder Woman and Superman deal with their emerging relationship); if you skip the Aquaman trade, then you'll miss two issues of Aquaman (the #0 origin issue and a prologue to "Throne" involving a long conversation between the title character and his half-brother Orm, the crossover's primary antagonist).

Now, if you were reading both books as they were serially published, none of this matters. But if you were trade-waiting both of them it sure does.

I'm not sure why DC does this (I suspect this is also what happens with some of the Green Lantern books and will happen once the three-book Justice Leagues crossover "Trinity War" starts showing up in collections). It may be to encourage purchase of the monthlies in the future, by punishing trade-waiters, but that seems rather unlikely. It may simply be that the folks in charge of the comics and the crossovers don't really worry about how they're collecting, and then a different set of folks has to try and make sense of some way to collect them while still having generally complete-ish stories in each collection.

I think a better way to do it would be to excuse crossovers from the volume numbering, and run them under the title of the storyline or the characters involved. In the case of "Rotworld" then, it would have probably made more sense to publish a book collecting all of the relevant issues of both books and called it Animal Man/Swamp Thing: Rotworld, or simply Rotworld. In the case of "Throne," a Throne of Atlantis collection might have made the most sense, or perhaps a Justice League: Throne of Altantis, with no volume number attached.

I don't know, though. It's a pretty weird problem and one I can imagine being extremely frustrating for trade-waiters, and one that doesn't seem to have a completely perfect solution.
Posted by Caleb at 8:28 PM

I would be interested to know if different editors are putting together these overlapping collections -- if one person is responsible for assembling the Justice League collections and another for Aquaman, for example. That might explain things to some extent, though not completely. After all, everything comes out of the same collected editions department.

If it's all done by the same person/people, though...then I'm really quite baffled. This strikes me as an exceptionally poor publishing strategy.

To be somewhat fair to DC, I think they're trying various approaches to collecting material.

For instance, the other extreme to this is the "H'el on Earth" Super-family crossover. Although the crossover is meant to be read in the "triangle sort of way," they're being collected separately. Vol. 3 of Supergirl collects #13-19, of which #14-17 are part of the crossover. In this case, I'm quite content as I have no interest whatsoever in the unfortunately-titled "H'el on Earth," but I can't get enough of Mahmud Asrar's artwork (Caleb, if you haven't yet gotten a chance to see his work, please go check it out).

My hope is that DC is experimenting and will let the readers determine the way that it collects crossovers in the future.

"(the latter officially has a "Vol. 2" in the title, although that was missing from several of the library catalogs I searched)."

I have this problem with our library system sometimes as well. I usually go to Amazon to try and get the order right if there's any question.

Oh, and I would like to second the recommendation of Asrar's artwork. Fantastic! Check out his blog here: http://mahmudasrar.com/

I had a similar complaint about the Black Ring/Secret Six crossover. Both stories are phenomenal, but their crossover meant that both issues were reprinted in each trade. And to make it worse, half of the crossover makes no sense if you haven't been reading the other book. It's a shame that each of those almost perfect books have such a huge flaw.

You could just buy one of the trades and then buy the couple of leftover issues. That's what I did.

I'm going yo play devil's advocate and say that this could even though I actually agree with you on how ridiculous I think it is, but I can imagine someone super particular about their trade shelves (or more likely a retailer) wanting there to be a clear progression from trade to trade on a title and having issues where to stick Animal Man/Swamo Thing: Rotworld on the shelf, so DC splits it to dodge the issue, but then still has to present a semi-cohesive narrative, so both books end up with a lot of overlap. It's that or massive recap pages, I guess.