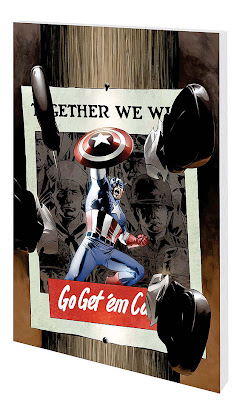 Why’d I Wait?: I’ve never been a Captain America fan, so not reading his monthly is my, like, default status. I didn’t realize how good Ed Brubaker’s take on the character was until I tried out a trade (Winter Soldier Vol. 1) on a whim one doay, and so here I am, reading it in occasional trade collections rather than monthly installments.

Reading Marvel series in trades verus in monthly installments is something of lose-lose situation for me, I'm afraid. On the one hand, their ad sales got so out of control last fall that its awfully refreshing to be able to read three or four consecutive pages of a Marvel Comic without an ad for Marvel Underoos, superheroes made out of candy or Honda Civics.

On the other hand, I hate, hate, hate their typical trade design. The spines all look the exact same, the front and back inside covers are crowded with ads and ISBN numbers, and the covers are usually reprinted unencumbered with logos and text, but they stick the goddam issue numbers on top of the art.

Why now?: After seeing the human flag so often in the many Civil War corssovers, I just felt like reading about a Captain America who wasn’t completely off his rocker all of a sudden for no reason.

Well?: The bulk of the book is devoted to Captain America #15-#17, by Brubaker and Perkins. I don’t know the history of Cap’s rogues very well, so the first story, which amounted to Crossbones de-programming sin (while cleverly retelling her history), didn’t do a lot for me, but it was a nice brutal introduction to two villains who would become a sort of supervillain Bonnie and Clyde in the very next issue.

From there, Cap and his handler/girlfriend go looking for them and the possibly resurrected Bucky simultaneously, and stumble into the bad guys’ plot to take over an A.I.M. lab, one which has devoured a whole small town.

I’ve seen the “Oh my God, the whole town is in on it!” plot before, but Brubaker makes it seem pretty fresh, and he does a great job portraying Cap’s tumultuous emotional responses to Bucky being out there alive after all these years.

Perkins is just a knock out. He pencils and inks everything, and does so in a photorealistic style that reads like a less labor-intensive version of Brian Hitches. It looks about as realistic (if slightly less meticulously detailed, and sans Samuel L. Jackson’s likeness), but Perkins is obviously a much faster artist (he pencils and inks these three issues). Reading this, again found myself wondering if Ultimates might not have been better off kicking Hitch to the curb in favor of Perkins.

The real highlight of the book though is the Captain America 65th Anniversary Special, which is illustrated by Pulido (Human Target, Robin: Year One) and Martin (Dr. Strange: The Oath, Batgirl: Year One), trading off chapters. 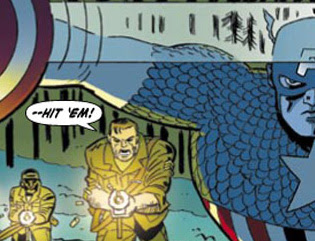 This story was exactly what I think a Captain America comic book should always be like— World War II-era adventures mixing light superheroics with espionage and combat.

Brubaker presents it as a flashback, but one that ties into his story in the monthly (as he did with flashback tales in Winter Soldier). Cap, Bucky, a two-eyed Sgt. Nick Fury and his Howling Commandos are sent behind enemy lines to figure out what the Red Skull wants with a particular scientist and a ruined castle, and stop him from doing whatever he’s doing.

Along the way, Bucky beats Dum Dum at poker, saves everyone from a machinegun, gets wounded, almost dies and falls in love with a resistance fighter. And Cap fights a giant, 15th century robot. It’s a fun story that mixes an old school Saturday matinee serial-style plot points with sophisticated character work. And Pulido and Martin both provide smooth, clean, slightly cartoony art work that feels appropriately comic book-y (as much as I appreciate Perkins’ work, Pulido and Martin’s is closer to my personal aesthetic preference); stylistically rooted in the Golden and Silver Age of comics art, but with fresh, modern storytelling.

Would I Travel Back in Time to Buy the Individual Issues Off the Shelf?: The Anniversary Special? Definitely. The other three? Eh, I’m fine reading ‘em in trade when the mood strikes me.
Posted by Caleb at 11:36 AM

My new year's resolution is to read more Marvel (and basically any amount of Marvel is more Marvel for me these days). The Brubaker Captain America trades are next on my list. I'm excited now.