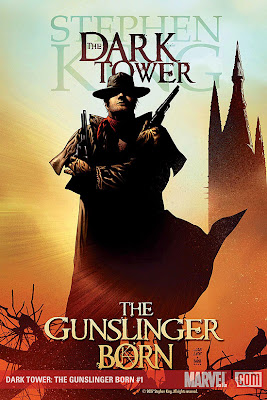 This week's LVW column takes a look at Marvel's The Dark Tower: Gunslinger Born #1 and Marvel's marketing of it as the Second Coming of Christ. As someone who isn't a fan of King's and was actively annoyed by the book by the time I even cracked the cover, I still found myself digging on the finished product, and if I liked it despite all that, I guess it must really be a well-made comic book. It's not the next Watchmen or even the next Civil War, but it ain't bad either.

And meanwhile, here in Columbus, The Dispatch gets around to noticing last year's American Born Chinese, which proved rather controversial for being nominated for traditionally prose awards. It's cool Gilson read the book, and she offers a fine synopsis of the plot, but what on earth does that headline even mean: "‘American Born Chinese’ bolsters comic-book style"? Stupid headlines that don't make any sense if you think about them for longer than a split second are, of course, one of the Dispatch's distinguishing characteristics, so I shouldn't be surprised, but this one seems slightly more nonsensical than the average. Put another way, "Comic book supports comic-book style." Wonder when they'll get around to a story about Columbusite Jeff Smith's universally adored Shazam!: The Monster Society of Evil?
Posted by Caleb at 8:09 PM