League Line-ups That Never Existed (But Should Have) #4 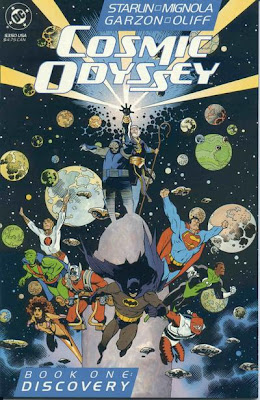 Okay, how's this for a Justice League: Superman, Batman, Martian Manhunter, Green Lantern John Stewart, Starfire, Orion, Lightray and Forager. Along with Etrigan the Demon, Adam Strange and Dr. Fate, this rag tag group of superheroes that Jim Starin wanted to use save the universe in this awesome miniseries featuring art by Mike "Yet To Found My Hellboy Multi-media Empire" Mignola.

While they don't call themselves the Justice League, they do behave in League-like fashion in this story, banding together to save the universe and splitting into smaller teams of twos and threes to get the job done. With the exception of Starfire and Froager, they've all been members of the League at one time or another, just not all at once.
Posted by Caleb at 9:35 AM