“…And if you see my ex-girlfriend, please kick her in the vagina for me."

Okay, I’m not sure if I’m reading this right or not, so I wanted to post it here and get some second opinions.

This is a passage from New Avengers #27, written by Brian Michael Bendis and drawn by Leinil Yu.

If you haven't read it yet, I'll set the scene. The woman on the left is the world’s greatest assassin (and former Daredevil flame) Elektra. The man on the right is super-strong, nigh invulnerable Luke Cage, nee Power Man. His superhero team just invaded her ninja team's base, and they're in the middle of a fight. 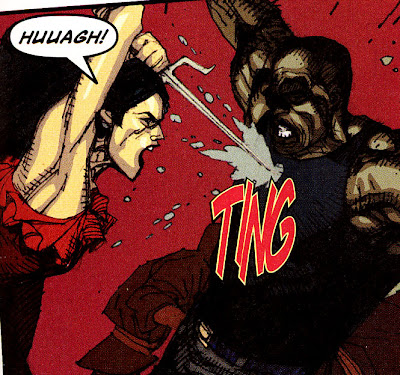 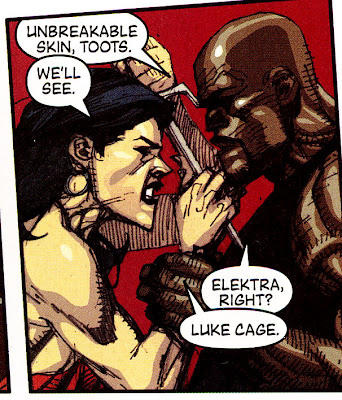 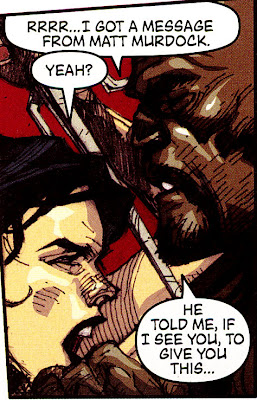 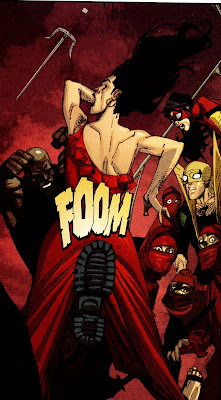 Sooo, did Cage really just kick Elektra in the crotch?

And the sound Bendis decided best represents the sound of a super-strong man kicking a woman in the vagina is “FOOM?”

And are we to believe Matt Murdock really told Cage, “Oh, hey, you guys are going to Japan to fight The Hand ninjas? Cool. Hey, if you see Elektra there, can you kick her in the vagina for me?”
Posted by Caleb at 12:42 PM

That's the dialogue? No kidding?

I feel guilty saying this, so it's going under Anonymous to avoid a flame war.
But I do not like Bendis' writing.

It's the same cheezy dialogue and the same illogical characterization over and over again, with a consistently dissapointing pay-off.

I haven't bought a Bendis book since House of M and life is better for it.

I figured he asked Cage to put his foot up her ass.

Who wouldn't ask him to do that?

so he was born Power Man and later took the name Luke Cage? that is how you phrased it. "nee" denotes the name someone was given at birth.

Yup. His parent's named him Power Man (his middle name was "Having"). He couldn't wait until he was 18 and could change it. Luckily he had unbreakable skin and super-strength, or else school would have been a lot rougher on young Power Man.

That is possibly the most cold, vicious and cheap shot I've ever seen in a comic book. Maybe I'm out of touch, but Elektra is a regular human, unpowered type right? How is a super strong man kicking her in the crotch not going to break her pelvis at the very least, if not reverse-compact her spine? What's especially horrible is that Bendis has Cage sucker her into a conversation before surprising her with this ultra cheap shot. And is that SPIDERMAN chuckling away and cracking wise at the sight of this crippling? These ARE heroes in Bendis' book, right? Maybe Bendis should have had Cage rip her uterus clean out...Spidey could have improvised some hilarious prop comedy with it.

That was Venom laughing at her, not Spiderman

Regardless of whether it's right or wrong to KHITBASH Elektra, I love the illustration of everyone in the background in that panel, especially the Hand ninjas. "Ooo, think I'm going to be avoiding the boss for a few days."

Werzel:
She's a Ninja. In the Marvel Universe, that gives her exceptional defense against cup checks like Cage's.
And yes, I know that's ridiculous.

a kick to Elecktra s crotch make all more funny..

Also, wouldn't that be more on Yu than Bendis, for the sound effects?

And finally, it's a super powered ninja fight. It seems like any time anything bad happens to a girl character, /someone/ drags out women-in-refrigerator-ism. They're people in funny costumes! They beat eachother up. It's the circle of life.