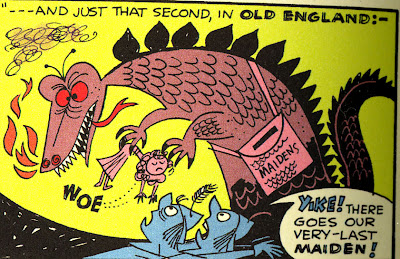 Above: The dragon in a Sunday Terr'ble Thompson strip by Gene Deitch, cirica 1956ish, and his manpurse. 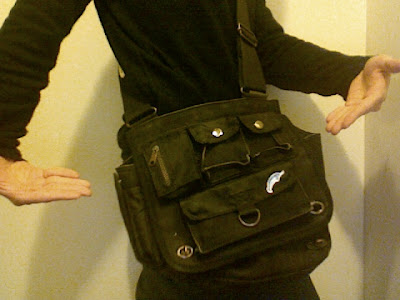 Analysis: The Dragon's manpurse is one of the oldest manpurses in existence. This story may have been written and drawn in the mid 1950's, but it's a flashback set during caveman times, meaning this dragon was wearing a manpurse many eons before manpurses were cool. It's also the only piece of clothing or accessory he's wearing, which shows a certain level of confidence in his manpurse. While pink is always a poor choice in manpurse (it's already a purse, and thus girly enough), The Dragon's is clearly labeled with the word "Maidens," which is exactly what he carries it for—To stuff maidens into.

My manpurse is a more manly black color, and has more pockets, but what are in those pockets? Certainly nothing as important as maidens. In fact, you couldn't fit a single maiden—even a really, really small maiden—into my manpurse.

Winner: The Dragon
Posted by Caleb at 9:38 PM