League Line-ups That Never Existed (But Should Have) #2 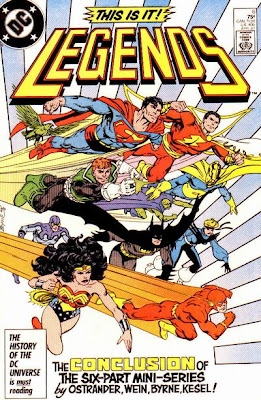 
Here are mine: This assemblage of the DCU's then-greatest heroes teamed up for the course of this one issue, with Dr. Fate gathering them one by one to converge and kick a little ass (Wondy flies in to help out; Post-Crisis, this was her first appearance to a lot of these characters. Post-Infinite Crisis, who knows how she fits into this story, if this story even ever happened).

At the end of the story some of them even propose becoming the new JLA, but Superman's all like, "Oh no, I'm too busy," and Wondy's already split. Seven of them would go on to form the new Justice League (although Cap, Canary and Doc Fate all split the new JLI almost immediately); Flash and Wonder Woman would join the Justice League Europe not too long afterwards. Given how awesome the post-Legends League turned out, I guess we're lucky this didn't end up being our exact team, but I think it's a great coulda been version of the League.
Posted by Caleb at 7:14 PM

I see no reason to include Supermand and Shazam on the same team.
In fact for more intresting dynamics I would nix Superman and leave in Shazam.
And if we must have Canary (I've always been unclear on just 'who' she is as a character) at least put her in her normal fishnets costume. That costume on the cover of this is scary stuff.

Could somebody replace Booster so Ted has someone to play off of? Or could Beast Boy fill this role?

I think including Captain Marvel and Superman would be rad because the best way to distinguish them is to have them bounce off one another. In theory. Other than a few scenes in JUSTICE, they never really team-up in League stories much.

And yeah, Black Canary's costume was indeed the worst costume she ever wore. I don't even think it makes sense...what's up with that bird thing on the front? I wonder how long it actually lasted...she was only in JLA for a few issues before quitting and taking that costume with her...