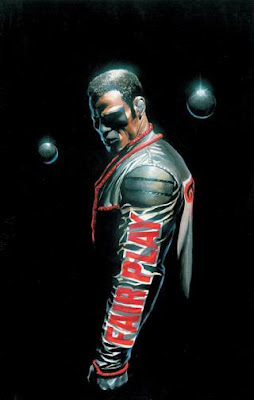 This week’s 52 features the origin of Mr. Terrific, genius and Olympic decathelete Michael Holt who, at a moment of crisis, decided to take up the name of the single goofiest Golden Age sueperhero this side of Red Tornado, eventually becoming the chairman of the Justice Society of America.

The art is provided by Ethan Van Sciver, and it’s fantastic looking, as EVS’ art always is. The sixth panel is actually the first time Mr. Terrific’s mask has made any kind of sense to me.

Mark Waid, who’s written a fine tale of the original Mr. T himself, does a nice, elegant job of reducing Holt’s origin into an easily digestible seven panels, but, as is often the case, what’s most notable is the omissions.

We don’t get a glimpse of the original Mr. Terrific, only that Holt was “code-named Mr. Terrific after a legendary hero of similar origin.”

And, even more strikingly, The Spectre has been completely scrubbed out of Holt’s origin. In the fifth panel, Holt still stands atop a bridge and contemplates committing suicide, but, “in that moment of decision, the memory of Jeffrey and Paula’s strength turned his bitterness into resolve.”

When Holt was first introduced, it was in the pages of John Ostrander and Tom Mandrakes superlative series The Spectre, and it was the ghost who intervened and convinced Holt not to kill himself, by telling him of Terry Sloane (whom The Spectre had known personally).

This is a “New Earth,” does that mean that The Spectre and Holt didn’t meet? Or simply that Waid didn’t think there was room to waste on it? (This version doesn’t necessarily contradict the previous one, it just doesn’t make it explicit, either).

In the “Essential Storylines” section, DC does its usual terrible job at recommending further reading for those curious about Mr. Terrific, only coming up with one storyline. Let’s see if we can’t do any better.

This eight-part miniseries pitted the JSA against a “new” menace called Legacy, who captured the original members still serving on the team, while the various legacy characters were told to get their shit together by The Spectre (Hal Jordan flavor) in preparation for round two with Legacy. The bookends are decent enough, but nothing special. Of greater interest were issues #2-#7, in which the team’s various legacy characters had solo adventures in the first half of the book, and the back half would be devoted to Golden Age adventures starring their namesakes. Each issue featured a gorgeous John Cassaday cover. The whole she-bang is available in trade, but the issue relevant to Mr. Terrific fans is #7. The lead story is entitled “Fair Enough,” and is written by Geoff Johns and David S. Goyer, with pencils by Dave Ross. There’s not a whole lot to the story, which is pretty paint by the numbers. Holt is being trailed by the DEO, and he breaks into Mr. Bones’ office to ask what the dilly is. The director tells him, “Your team has become the most powerful group of super-beings in the world. And you’re their leader. That makes you one of the most important people on this planet.” Then he hands him a file about his late wife, Paula Holt, which reveals she was six week’s pregnant when she died. Oddly enough, it’s the back-up which is bigger, longer and more exciting—novelist Michael Chabon and artist Michael Lark deliver a gem set in the Golden Age entitled “The Strange Case of Mr. Terrific and Doctor Nil.”

The original Mr. Terrific is perhaps the goofiest of the Golden Age heroes, and considering the era also gave birth to Ibis the Invincible, The Red Bee and The Atom, that’s saying something. Good comics writers seem to love the guy though, and Terry Sloane has been featured in some, um, terrific stories in the last ten years or so. Perhaps the best was in James Robinson and Tony Harris’ Starman, probably DC’s best ongoing series since Alan Moore left Swamp Thing. In “Talking With David ’97” (collected in Starman: Infernal Devices), then-Starman Jack Knight has dinner with an assemblage of dead Golden Age heroes, Sloane included. In just ten panels, Robinson will convince you that Mr. Terrific is one of the coolest characters DC owns the rights too. Waid also turned in a great Sloane story as part of 1999’s The Justice Society Returns! event. In National Comics #1 Waid and Aaron Lopresti send The Flash and Mr. Terrific to Dresden, Germany during the war, and we get to see just how challenging it can be to be perfect. Sloane plays an interesting role in the series’ concluding chapter too; the whole epic storyline is collected in a highly recommended trade.

On the long list of titles I can’t believe DC hasn’t collected into trade paperback yet, the 1992-launched Ostrander/Mandrake Spectre series is rather high. Not only did it consummately tell the tale of the Spectre (to the point that the various relaunches have all seemed pointless), but for many years it was the only place for Golden Age DC characters to show up. It’s also where Mister Terrific II was created and introduced. Goyer and Johns would make him a true player in the DCU, but Ostrander and Mandrake made him. This 1997 issue is the one in which they do it. The Spectre tells suicidal Holt about Terry Sloane, who appears via flashback, along with Dr. Fate, Jay Garrick and The Spirit King, inspiring him to not only stay among the living, but to pick up where Sloane left off (albeit it in a cooler costume). Like most issues of this series, it’s not available in trade, but it’s worth seeking out a back issue of in dollar and quarter bins.

Oh yeah, Mr. Terrific has been co-starring in one of DC’s best-selling and creatively consistent titles for years now, hasn’t he? But I guess none of these stories, all of which are available in trade, are considered “essential” to the character, based on the 52 write-up. Mr. Terrific was one of the first new additions to the team, showing up on Blackhawk Island to help the original line-up put the kibosh on Kobra with a K. In short order he joined the team, taking over as chairman from Sand and defending the title from the resurrected Hawkman. If you’re looking to catch up in trade, he’s in every single one of ‘em from Darkness Falls through Ghost Stories. Trade Fair Play collects issues #26-#32, in which the Society meet villainess Roulette, who has a connection to Holt’s namesake. Savage Times (#39-#45) sees Holt, Captain Marvel and Hawkgirl shunted back in time to ancient Egypt. Lost (#59-#67) includes the three-part story “Redemption” in which the Society faces the Spirit King and Mr. Terrific struggles with his faith, and Black Vengeance (#68-#75) sees Holt taking another trip backwards through time, where he meets up with his predecessor and experiences mid-twentieth century racism.


JLA/JSA SECRET FILES AND ORIGINS #1: Goyer, Johns and penciller Stephen Sadowski previewed their upcoming hardcover JLA/JSA: Virtue and Vice with this special one-shot. Mr. Terrific visits the Batcave under the pretense that he’s there to talk security and information technology, but actually wants to talk about dealing with his grief. They do some male bonding off-panel. This sets up a sort of relationship between the two, as they often play off one another, both falling victim to The Seven Deadly Enemies of Manking in Virtue and Vice and chatting up in the Thanksgiving crossover in JSA #54.

As the origin points out, Mr. Terrific is a member “of one of the elite royals of Checkmate, an international intelligence organization sworn to maintain the balance of world power.” I haven’t been reading the title, which is up to issue #10 this month because, despite writer Greg Rucka’s bonafides for espionage writing, I’d lost my dwindling respct for him as a comicbook writer by the end of The OMAC Project, which, in addition to being completely nonsensical and incongruent with the last 20 years of DC comics or so (like his Superman and Wonder Woman stories going into Infinite Crisis) was also pretty boring. Word that former Justice Leaguer Fire slits someone’s throat (and that JSAer’s Alan Scott and Michael Holt are cool working in a kill-or-be-killed world of international espionage) just rings too false to me.

JUSTICE SOCIETY OF AMERICA: The relaunched title is only up to #2, but so far it’s even better than the cancelled JSA. Mr. Terrific is again a member of the team. The first issue of this series is when he started getting referred to as the “world’s third smartest man,” whatever that means. He’s pretty bright, but it’s hard to imagine he’s smarter than, say, Dr. Sivana, T. O. Morrow, Dr. Ivo, Dr. Magnus, Lex Luthor, Steel and Ray Palmer. I mean, what’s he invented lately? T-Spheres? No sentient robots? Artificial souls? Artificial time? And he calls himself a genius…
Posted by Caleb at 7:34 PM