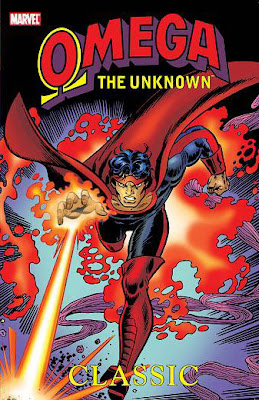 1.) Is this the best single Marvel superhero comic book ever produced? I think it may be. Sure, we can all think of scores of better written ones and better drawn ones, but consider the fact that this is a complete story, including a true, real, proper and final ending. How many Marvel supehero stories have actually had one of those?

2.) I don't understand why this trade is entitled Omega the Unknown Classic. There's only one Omega the Unknown series, and this is it. True, Jonathan Lethem and Farel Dalrymple are working on an Omega series, but thus far only a press release and a few images have been released, so it's not like they needed the word "Classic" in there to distinguish this Omega trade from some theortetical future Omega trade.

4.) Steve Gerber and Mary Skrenes were really ahead of their time with this story; it anticipates the '80s deconsturciton of the genre and '90s and '00s metafictional storytelling in some pretty suprising ways. I've been catching up with the Marvel comics of the 1970s via Essentials as quickly as my wallet will allow, and this is one of the few stories from that era that doesn't seem horribly dated (beyond the fashion and slang, naturally).

5.) The first panel of the series shows Omega the Unknown running through an alien landscape, laser blasts shooting past him. The first words are, "Some unforseen factor interrupts the orderly flow of events, and without warning, a finely-tuned organism erupts in dischord, violence." Now that's how you start a fucking comic book story!

6.) It's cool that Marvel made Omega such an unrepentant Superman knock-off. Black hair, blue eyes, red and blue cape and tights. From a doomed alien planet. Today's Marvel Superman knock-offs like the Sentry, the newest Hyperion and that guy in Reginald Hudlin's Marvel Knights Spider-Man story arc go to somewhat ridiculous lengths to fudge their similarities to Superman. Yeah, okay Sentry, you're blonde and your costume has a different primary color than red. You're totally not Superman at all. Whatever you say, man.

7.) Each issue after the first starts with this text above the title on the first page: "ENIGMA THE FIRST: the lone survivor of an alien world, a nameless man of somber, impassive visage, garbed utterly inappropriately in garish blue-and-red. ENIGMA THE SECOND: James-Michael Starling, age twelve raised in near-isolation by parents who (he discovered on the day they "died") were robots. ENIGMA THE THIRD: the link between the man and the boy, penetrating to the depths of the mind and body, causing each to question his very reality of self."

Contrast that with the text that appears on the title page of each issue of Green Lantern: "Pilot Hal Jordan was chosen to represent an intergalactic police force created by the oldest beings in existence--the guardians of the universe. Protecting earth and all of space sector 2814 from every extraterrstrial threat imaginable, Hal Jordan shines his light proudly as the Green Lantern!"

8.) Jim Mooney is awesome, even with his pencils colored so horribly. I wish this were black and white, like an Essential collection.

9.) There seems to be some issue over who created Omega. The credit boxes of the individual issues sometimes read "Conceived and written by Steve Gerber and Mary Skrenes," which seem to make it pretty clear who created the character, but I don't understand the existence of this site, which links to Gerber's homepage, and apparently exists solely to remind people that he and Skrenes created OtU.

10.) I can't decide which I like better; Omega's costume as seen throughout the series, or the prototype for it designed by John Romita (a sketch of which is included in the trade). I don't care for those boots Omega rocks; he looks like he's about to go fishing.

11.) I love the fact that even though we know Omega and creepy little know-it-all James-Michael Starling are somehow connected to eachother, for much of the series their stories are completely parallel. They each have their own supporting casts and their own storylines, and it's only fairly rarely that they interesect.

12.) I was under the impression that Dan Slott totally made up Ruby Thursday as a stupid one-off supervillain to use in She-Hulk. Shows what I know.

13.) As much as Omega and James-Michael seem to exist in their own corner of the Marvel Universe, there are actually guest-stars aplenty. He fights the Hulk ("Why won't Curly-Hair leave Hulk alone?! Does Curly-Hair want to get smashed?"), Nitro, Electro and someone called Blockbuster (I think I prefer DC's to Marvel's). One of James-Michael's roommates is a freelance photog for J. Jonah Jameson (she's kinda like Mary Jane and Peter Parker combined into a single character). Foolkiller shows up, as does Richard Rory, and, in the two-part conclusion (which occured in The Defenders, not Omega the Unknown), a random assemblage of Defenders and Avengers.

15.) I feel a little leary of Marvel redoing such a perfect comic book in any capacity, but man, Dalrymple is awesome, and I am looking forward to him tackling a big Marvel project. Take a look at this, from his livejournal sketch-blog thingy: 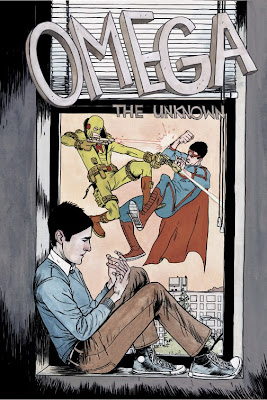 Maybe they'll call it Ultimate Omega the Unknown.
Posted by Caleb at 1:39 PM

I have to ask - how did Hudlin's character "fudge" his similarities to Superman? It was painfully clear that he was (on some level) a Superman send-up.

The arc wasn't very interesting, so I didn't get the concluding issues, but the ones I did read contained allusion after allusion.

Anyway, that art for the new Omega series looks great. I hope it happens.

I think in OtU they just did a better job of calling a spade a spade, whereas in those other instances, they wanted to use a Superman-type but make it artificially different enough that they couldn't be sued, which is a sort of half-measure I've never been a big fan of. Either make fun of Superman or don't, you know?

Oddly enough, I can't even remember the Hudlin characters' name at this point. I didn't dig the arc either; I read the library's copy of the trade. Weird choice of cover too.