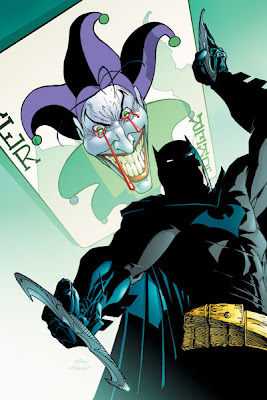 My initial reaction to the news of this book’s contents was one of irritation, part of which was due to the fact that for the fifth issue in a row, Andy Kubert doesn’t show up for work, and Grant Morrison’s only half here, giving us an almost-finished prose short story about Batman and the Joker rather than a finished comic book script (or even finished short story).

As a comic book/piece of sequential art, “The Clown at Midnight” is as bad as you can get, seeing as it’s not really a comic book/piece of sequential art at all. Whether or not it’s any good, depends on how you want to look at it. But if we look at it the way we traditionally look at comic books, then it’s about as sucky as a comic book can get, on account of it failing to meet the bare minimum requirements of actually being a work done in the medium that it aspires to be done in.

So if Batman #663 isn't a comic book, what is it, exactly? For the most part, it’s prose, of the kind one would find in those old Further Adventures of the Batman short story anthologies edited by Martin H. Greenberg around the time of the Tim Burton movies, and yet it’s very heavily illustrated, with a picture-to-word ratio that’s closer to a children’s picture book than anything else. The images are inserted without too much rhyme or reason, and the text appears over black and white background images. All dialogue is in italics for some reason, too. More than anything, it looks like a comic book-sized version of liner notes to a pop metal album, with stills from a Batman video game inserted here and there.

Those images are all created by John Van Fleet, and they seem to be heavily computer-generated, aesthetically clashing with the Arkham Asylum, Gotham graveyard and abandonded wareshouses the story is set in, as well as with Morrison’s careening adjective trains. I couldn’t help but wonder why Kubert didn’t provide the illustrations (surely 54 images aren’t as trying as a normal, 22 panel-filled page comic book, is it?), or why they didn’t choose a collaborator with a similar aesthetic (Kelley Jones, for example, whose Batman run was spent illustrating Dough Moench’s comparable lyrical narration and occasional experiment with format).

The images don’t pair up very well with the prose, either, and for the most part, are fairly random in what aspects of the prose they illustrate. The book opens with a group of clowns who all at one time or another served as the Joker's thematic henchmen holding a funeral for one of their own, a 400-pound clown, yet all we are shown of it are some close-ups of clown faces, and pallbearers in the background. The money shot of the scene—the poisoned pallbearers dropping their charge, the coffin breaking and disgorging a corpulent clown corpse—is left to our imagination, apparently not grabbing Van Fleet's.

The words by Morrison are, for the most part fine; in one of those Greenberg anthologies, it may have stood out as one of the better entries, but so few of those stories were what one might generously consider literature anyway. Morrison's narration is sort of over-done, a trying-too-hard descriptive rant-for-ranting’s sake, and without prior knowledge of the series and Morrison’s run on it, you wouldn’t know what was going on at all (Taken as a standalone piece of prose, then, it doesn’t fair too much better than it does taken as a comic book). Morrison doesn’t bother with describing most characters or the settings, but leaves that to the readers’ own familiarity with the Joker, Batman and Harley Quinn; an odd choice considering the amount of verbiage he spends introducing us to the “spirit” of Gotham City, something anyone who’s been reading Batman comics for more than an issue is already quite familiar with (The Gotham of this story sounds like the Year One one too; didn't Batman just take a vacation because he'd managed to totally clean up Gotham so thoroughly?).

Morrison does have some fantastic ideas about the Joker and his evolution over his 60-some years of existence. Finding a way to reconcile comics characters’ real-world, real-life existence with their existence in the fictional setting of the DCU has long been something Morrison excelled at, a sort of specialization in the field of comics alchemy. Here the different portrayals of the Joker over the years is itself portrayed as a sort of ritualistic metamorphisis the character goes through, and during the climax we catch up with him as he’s about to transform himself yet again. Under Morrison, the Joker is not just a supervillain, but something of an artist and something of a god, going through different periods and incarnations.

This stuff is all DCU gold, but it gets lost in the format, I think, as the surface so strongly outshines the substance. Morrison nails a description of Harley Quinn, the relationship of the Batman and the Joker, and the very essence of the Joker, but he unfortunately can’t do so while proving entertaining (what little drama there is to the story is nothing you haven’t seen in The Killing Joke, Arkham Asylum, Mad Love or almost every single Harley episode of Batman: The Animated Series), nor can he do it within the confines of his chosen medium.

As a short story, it’s an amateurish and half-finished execution of a remarkably brilliant take on comics’ oldest and greatest supervillain (Suck it, Dr. Doom!).

As an art object, it’s a repulsive little pamphlet, complete with ads for toys and other comic books jammed between the paintings (As far as I can see from a flip-through, all but one of the ads are house ads for DC products, so why couldn't DC stick those all in the back?).

And as an experiment it’s a failure. A fascinating failure to be sure, but a failure nonetheless.
Posted by Caleb at 1:46 PM