In last week's post about Impeach Bush! I mentioned an interview with cartoonist Mike Leffel, pertaining to the difficulty of drawing Ex-Secretary of Defense Donald Rumsfeld vs. the difficulty of drawing President George W. Bush. Leffel said he got his Bush rather quickly, but struggled for a while with Rumsfeld. I found the opposite to be true; I got a Rumsfeld I was happy with fairly quickly, but still haven't gotten a Bush I can stand the sight of.

But wait, Caleb, you're not a political cartoonist, you're a comics blogger and freelance writer, it says so right in the upper right hand corner of the page—why on earth would you be drawing members of the Bush administration?

Well, when getting started on Caleb's Incomplete Self-Published Comicbook #1, I would practice drawing by going through an issue of Newsweek and drawing everything in it as a sort of, like, artistic work out (kinda like push-ups for my pencil hand, to get in better shape). It was a good way to force myself to draw things I wouldn't normally think to draw, like sports utility vehicles and Rush Limbaugh's jowls and Angelina Joilie dressed up as Alexander's mum. Naturally, photos of powerful members of the Bush administration were always popping up in the magazine, so I ended up trying to draw them a lot.

I've since cancelled my subscription to Newsweek out of abject poverty and thus don't do that particular sketch work out anymore, but the Impeach Bush! story got me thinking about drawing presidents and their administrations, so I thought I'd dig out an old sketchbook and take it to a scanner.

So, are you ready for a peek inside my sketchbook? Scroll ahead, dear reader, and see why I'm a freelance writer rather than a freelance artist... 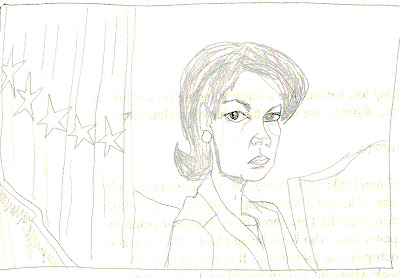 Then National Security Advisor Condoleeza Rice, from a Newsweek photo. This is the typical first step in the old workout, where I'd look at the picture and try to draw every line. Note the complete lack of understanding of anatomy, perspective or dimension...it's really just lines trying to imitate a picture of reality, rather than an illustration or interpretation of reality. 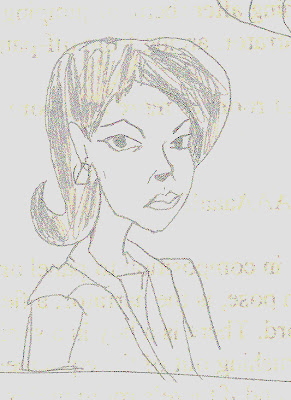 I'd typically follow it up with the second step of trying to reduce the number of lines, making for a more simplified flatter image that disguises my weakness as an artist under the figleaf of "style." 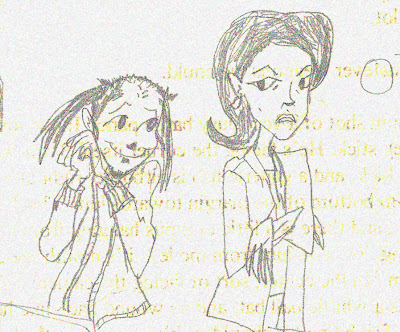 Self-portrait (with previous haircut) with Rice; did I mention I had a crush on Rice? Because I did. She seems unappreciative though. Perhaps it's because she didn't care for the way I drew her arms (That's what those weird angled lines are in front of her torso...or what they're supposed to be). 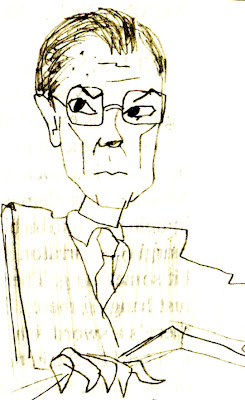 Then Secretary of Defense Donald Rumsfeld at a press briefing. 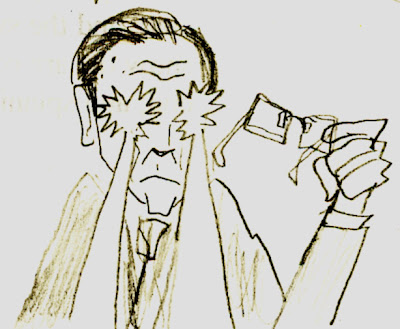 Rumsfeld removing his glasses to shoot eyebeams at a reporter at a press briefing. 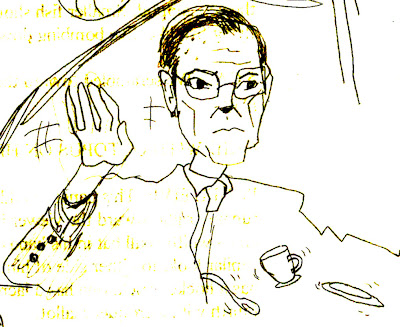 Rumsfeld demonstrating his formidable powers of telekenisis by causing a tea cup, spoon and saucer to float in the air at a press briefing. 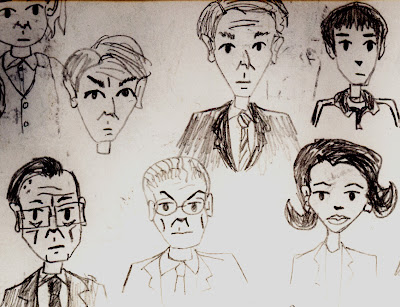 From a page of head-shots. Clock-wise starting at six-thirty, that's then Secretary of State Colin Powell, Rumsfeld, a character from Incomplete Self-published Comicbook #1, a floating President Bush head, a slightly better Bush head attached to a pair of shoulders. another character from Incomplete Self-published Comicbook #1 and Rice. 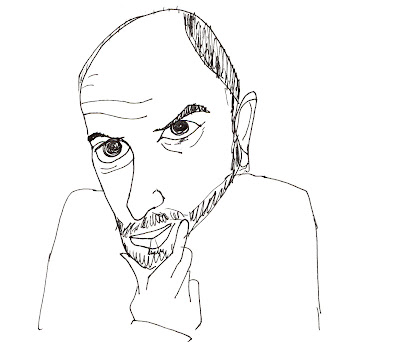