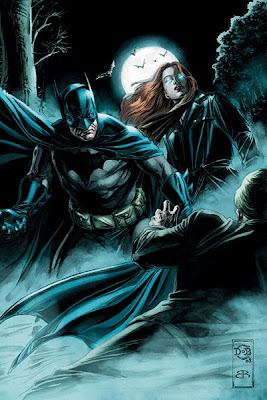 Batman and The Outsiders #9 (DC Comics) It’s the second-to-last issue by Chuck Dixon, but you sure as can’t tell by reading it, as the ongoing plot involving corporate shenanigans and aliens shows no signs of wrapping up and, in fact, takes a few more turns toward the really weird. Guest-starring old school Outsider Looker.

Confidential to Metamorpho: I believe the correct slang for a toilet would be “the crapper,” or, in a Vertigo book, “the shitter;” “the pooper” refers to something else entirely. 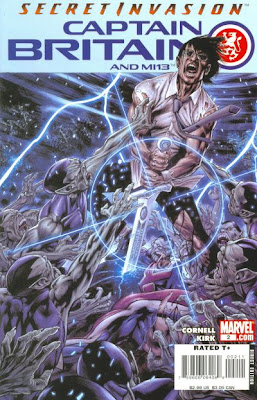 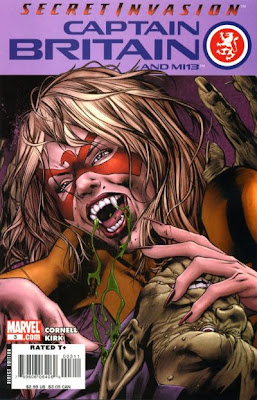 Captain Britain and MI13 #2-#3 (Marvel Comics) It being a super-slow week for super-comics and me being bad with money, I took the opportunity to get all caught up on Captain Britain instead of doing something sensible like buying a lottery ticket or a gun to protect my property when the rest of the banks close down.

I was quite pleased to find this was yet another case of positive Internet buzz being right on the money—this series is off to a terrific start (Lesson: The Internet is always right about everything). Yes, it’s launched with a Secret Invasion tie-in, which might be a smart idea in terms of getting folks to try it out, but seldom leads to good comics.

Writer Paul Cornell has apparently looked at the Secret Invasion plot as an opportunity, turning the book’s initial story arc into one dealing with alien invaders from the Marvel Universe attacking and destroying the cultural myths and shared stories of Britain, with a handful of go-betweens trying to save the world of British imagination from the shape-shifting hordes of a company-wide crossover.

It’s clever commentary that works just fine on the literal level of super and magic people fighting super and magic aliens, too. I’ve always taken pleasure in universe comics that make use of the lower-tier characters—here Captain Britain, Spitfire, Black Knight, Pete Wisdom, etc.—and the British setting is just exotic enough to be more interesting than a new team comic set in the U.S.

I think the title actually helps give some scope to Secret Invasion as a whole, since the main miniseries is mostly set in New York City and the same old Marvel locales (SHIELD Helicarriers and bases, The Savage Land, The Baxter Building, Avengers Tower). Here you get the sense that The Skrulls actually want to take over the world, not just kick the superheroes around New York City the way The Hulk and his alien invaders just got done doing.


Guardians of the Galaxy #1 (Marvel) And here’s the other new Marvel series I’ve been meaning to check out for a while now. The copy I got was actually a second printing…is this book really that popular?

I really enjoyed the recent Starlord series, even thought it was the only piece of either of the “Annihilation” events I had read, and this seems to be something of a continuation of that series, involving as it does Starlord, Rocket Raccoon and, to a lesser extent, Mantis and Groot. Along for the ride are a bunch of other Marvel characters I don’t know anything at all about—Adam Warlock, Drax the Destroyer, the Lady With the Sword Whom I Think Was a Space Lesbian, and The Lady Who Has Green Skin Whom I Think Is Called “Gamora.”

This has an entirely different creative team than Starlord, with Dan Abnett and Andy Lanning (whom I refuse to call “DnA”) scripting and the art team of Paul Pelletier and Rick Magyar (last seen on the Dwayne McDuffie Fantastic Four) drawing. Still, they manage to keep the action-comedy tone of Starlord, and deliver some big crazy ideas (church ships powered by faith) in a fast-paced space story.

Plus there’s a psychic dog that thinks with a Russian accent on the cast. So I think I’d better hurry up and get caught up on this series.


The Incredible Hercules #119 (Marvel) The most unlikely and surprising Skrull revelation occurred in the previous issue of Caleb’s Favorite Marvel Comic, but this issue we see what damage the secret invader does as Hercules’ God Squad is split up and come face to face with the He who the Skrullish zealots say loves people right before they shoot them or blow them up. 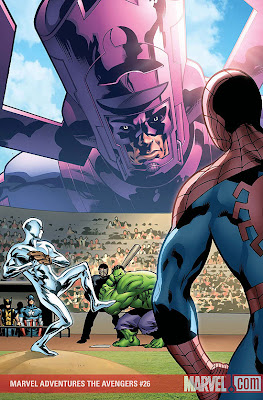 Marvel Adventures Avengers #26 (Marvel) I suppose any words spent on a review of this issue are completely superfluous after you’ve seen the cover. Either you see The Silver Surfer winding up to pitch to The Hulk while Galactus peers over the walls of a stadium and Captain America and Wolverine stand in the dug out and think, “Wow, that looks awesome!” or you don’t.

This is another Jeff Parker and Ig Guara collaboration (with Sandro Ribeiro on inks), pitting the MA Avengers against Galactus and his herald/hypeman The Silver Surfer.

Since the Surfer has to find a populated planet for his boss to devour, he chooses the one that hosts the rudest, most disliked aliens in the galaxy, but the Avengers come to their aid anyway. After a whole one-panel of thought, Spidey pulls the trigger on the Ultimate Nullifier, to unpredictable results.

Since fighting didn’t work, the two sides engage instead in a variety of competitions to decide if the big G. gets to eat the world or not, including baseball, poker and chess.

As per usual, Parker fills the book with great gags, and, to spoil one, he gives The Hulk this great line: “Hulk thought Rook always move whole length of board!” 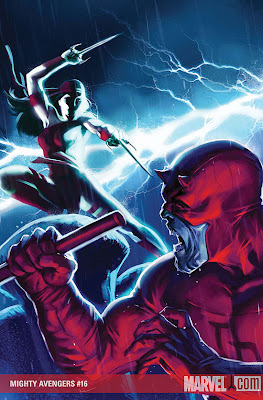 Well the wait is over! Brian Michael Bendis fills in more of the background of his years-in-the-making Skrulls vs. superheroes story with this issue, winding the clock all the way back to New Avengers #1 and showing us what was up with Skrullektra all that time.

It’s a sure is a strange way to tell a story, building up a mystery for some three years, just to then spend a few months dumping explanations through flashbacks, but I guess it keeps things interesting. For example, these days you never know what you’re going to get an issue of Bendis’ Avengers titles.

For example, you might expect them to feature some Avengers, but then, you’d be wrong. In this issue, the real Elektra fights Skrulls, Skrullektra hires Electro to do whatever he did at The Raft back in 2005, and she takes over The Hand. Khoi Pham Pencils, Danny Miki inks it, and it is not at all as fun or satisfying or full of Avengers as Marvel Adventures Avengers.


Tiny Titans #6 (DC) Art Baltazar and Franco’s super-cute, kid-friendly take on DC’s decidedly kid-unfriendly Titans franchise just keeps getting cuter, funnier and better. This issue details Raven’s home life with her demon father, Blue Beetle’s relationship with his talking backpack (as much as I dug John Rogers’ Blue Beetle, I think this might actually be my favorite BB story to date), introduces the Tiny Titans version of the Titans team Judd Winick and Ian Churchill slaughtered in that awful-looking Titans East Special (Li’l Barda is so adorable!!!), Streaky the Super-Cat and Beppo the Super-Monkey guest, and there’s even a cameo by old-school Titans villain The Ant. And a key to deciphering the scarab’s speech. And a class picture.


Trinity #7 (DC) This is another issue that reads more like a Justice League adventure than a Trinity one, which suits me just fine, as Kurt Busiek writes a pretty decent Justice League and I like seeing Mark Bagley draw DC characters after so long on Ultimate Spider-Man (in addition to the JLA line-up, he also draws Nightwing this ish). In the opening story, the characters begin to realize that everything that’s been going on in the pages of Trinity is connected, while in the back-up (drawn by Tom Derenick and Wayne Faucher), Firestorm gets a history lesson on Krona from John Stewart. It looks like Trinity will be picking up plot threads left over from Busiek’s aborted JLA run (which ended up amounting to only a single storyline, “Syndicate Rules”) and his JLA/Avengers crossover.
Posted by Caleb at 1:27 PM

Agreed on Mighty -- remember when a book titled "Avengers" actually HAD some Avengers in it?

I'm wondering, is Elektra actually DEAD this time? It's not like Bendis could be bothered to confirm one way or the other in the book -- what impression did you take away from it?

Also agree with you on the MI13 and Hercules books -- great fun all around! Here's hoping Snowbird survives (now, if they can bring back Marrina from Alpha Flight as well, I'll be really happy).

Thanks for the fun read.

Take it and run,

You know, that sentence right there is a scintillating summary of the reason I'm coming to prefer Siver Age books, Giffen's "Justice League", and the "all-ages" stuff like Marvel Adventures.

Trinity seems to be picking up on the excitement after a couple of rather slow issues, so I'm quite pleased with that. I guess I had better go get a copy of Tiny Titans, it sounds adorable.

I had been bored enough with Trinity to be on the verge of dropping it, and this week (and the tie-ins to old Busiek JLA plots) finally got me excited.

MA Avengers is one of my new favorite books, added just because the interwebs told me how great it was, so thanks for the reviews!

I remember when they first made the revelation that Elektra was a Skrull there was a theory floating around that this was a way to keep it so she was never brought back to life and was perhaps an attempt to entice Frank Miller to come back to Marvel, so I was a little surprised that that didn't happen.

But I have no idea, really...is Elektra dead? Who had sex with the Punisher? And fought Wolverine when he was an Enemy of the State? And starred in the series with the Greg Horn covers?

It's weird how these flashback issues fill in all this history, and yet I still don't really know what's going on when they end.

The thing about this Might Avengers issue it that it's going to look padded... in the TRADE.