My apparently now monthly post about Gotham After Midnight

Wednesday's new issue of Steve Niles and Kelley Jones' Batman: Gotham After Midnight wasn't merely numbered with the standard "3," but said instead that it was the "thrilling 3rd issue." I'm sure DC meant that bit of hyperbole as humorous irony, but, to be honest, I did find it rather thrilling. Or, at least, I found the art half of the equation thrilling.

Here, let me share my thrillcitement with you. Here are the three most thrilling scenes in the comic.

1.) I can think of no better exaample of Kelley Jones tendency to exaggerate the hell out of everything than this panel right here: 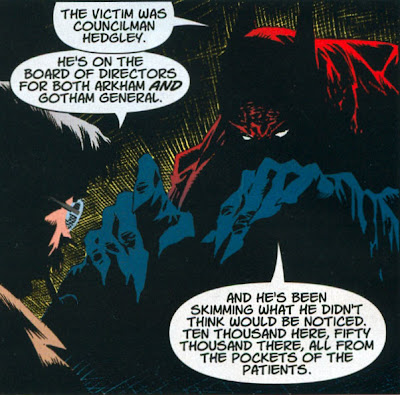 It doesn't look like he's comparing notes with Gordon so much as trying to hypnotize him. Or maybe cast a spell on him. Or getting ready to lean over and bite him.

2.) Later, Batman has returned to the Batcave and is preparing to take a batnap when the batsignal goes up, letting him know that Gotham needs him. How does the Kelley Jones Batman have thngs set up to alert him of danger? Is his cellphone set to vibrate? Is there a blinking red hotline phone under a glass dessert case? Perhaps a siren or alarm of some sort? No, nothing so subtle as that. 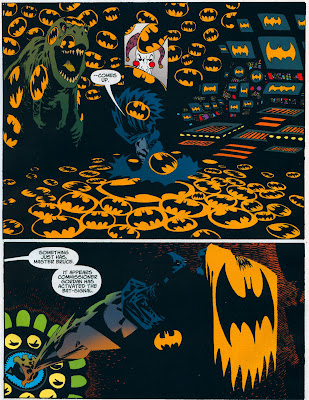 Apparently a batsignal is shone into some kind of disco ball, which then covers the entire surface of the batcave in dozens of little batsignals.

3.) As I mentioned in my review last Wednesday, the plot of this particular issue involves recurring Bat-villain Clayface growing to enormous, King Kong size and threatening the city.

When Batman sees what's up, he tells Alfred to forget the batmobile, as he's "going to need something bigger."

We then cut to a couple of pages of giant Clayface wreaking havoc, when, on the last panel of one page, he hears someone calling his name. Clayface turns and, on the very last page, sees this: 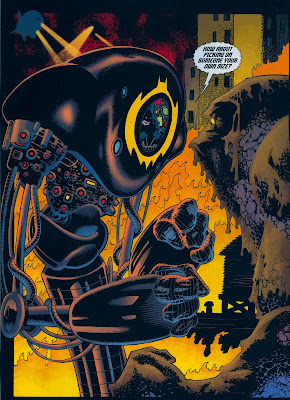 That's the first the reader sees of Batman's anti-giant Clayface weapon system too. You just turn the page and, on the next spread, theres' an ad on the left-hand page and a splash on the right-hand page featuring Batman in his giant robot punching machine.

Why does Batman have one of these? How did he build it? What's it look like from the wasit down...does it have legs? Wheels? Does it transform? How did he get it into the city and manage to sneak up on Clayface with it? These intriguing questions are left unanswered, Niles and Jones just leaving us with the impact of seeing Batman appear in his giant robot punching machine.

And as cool as that little surprise is, what really makes this page is the expressions on the two characters.

You've got Batman looking all serious and determined while lookng out through his little bat-decorated porthole, completely oblivious to how silly he looks while manning the shockingly simple-looking controls 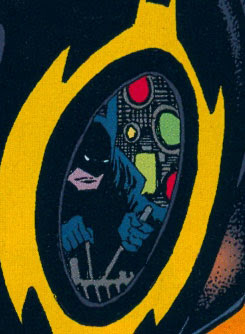 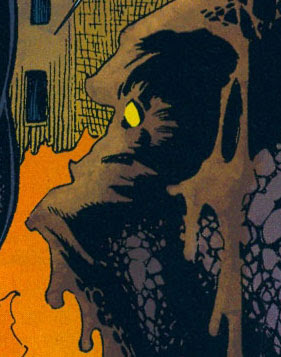 And that all adds up to a thrilling 3rd issue. I can't wait to see these guys duke it out in what I'm assuming will be the "fo' real fourth issue."
Posted by Caleb at 3:20 PM

Didn't Batman have a Bat-Mech when he took on Swamp Thing? I vaguely recall some kind of robot being involved in Bats' attempt to stop Swamp Thing from wrecking Gotham to get his wife back...

No, he had a special Lumberjacking-Batmobile with giant-buzz saws-on-arms when he fought Swamp Thing. Which I guess he maybe had to fight Poison Ivy, but it looked like something Mattel would make.

I think that Batman is looking like he's going to waggle his fingers and say "SPOOOOOKY!" to Commissioner Gordon.

Also, the Bat-Disco ball answers my question as to what happens if Batman happens not to be looking the right way towards the signal light.