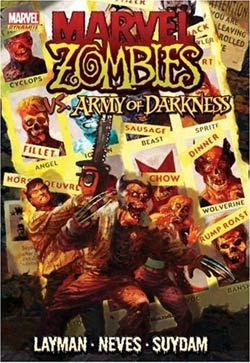 Why’d I wait?: I had tried reading Dynamite’s series of Army Of Darkness series somewhat fitfully—the first mini, the first issues of the second mini and the crossover with Re-Animator, the crossover with Darkman—before coming to the conclusion that as much as I might have liked the Evil Dead trilogy, it had more to do with those movies as movies rather than stories. A large part of what makes Bruce Campbell’s character Ash so fun is seeing Campbell play him, and I quickly tired of the repetitive AoD comics.

That said, I did try the first issue of this series too, but was so turned off by the art, which has the photo-reference-y artificiality and airbrushed-looking coloring of a Greg Land comic that I just couldn’t take it. The first 22 pages of John Layman script wasn’t awful or anything, but didn’t offer me anything worth trying to suffer through that art for.


Why now?: Thinking about how much I’m turned off by this sort of art (which is all-too common at Marvel these days) while reading the Salvador Larroca illustrated Invincible Iron Man this week reminded of how turned off I was by this book, and the fact that, given the popularity of the Marvel Zombies, my local library probably had a hardcover collection of it. 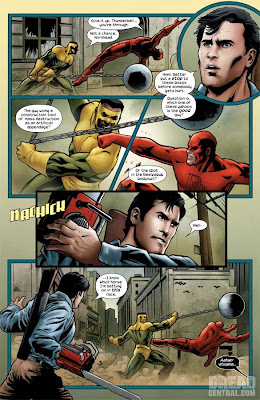 (Above: See this art style? I hate it. This isn't, like, the worst page or anything, it's just one I was able to find through a Google image search.)


Well?: Well, the art didn’t get any better since they published the first issue of this in a serial format.

Although it’s worth noting that, towards the climax, Marvel Zombies artist Sean Phillips shows up to draw a few pages, and they look so great that I didn’t understand why they didn’t just hire Phillips (or someone with a more “drawn” looking style) to illustrate the whole story.

I can sort of understand that, since they were using a character from the movies who looks exactly like Bruce Campbell in a blue shirt, they might have thought the slick, photo-like style might be appropriate (although, oddly, Ash doesn’t look much like Campbell in most of these panels), but, at the same time, those first AoD comics Dynamite were putting out had some seriously cartoony art by Nick Bradshaw, and it looked great. I would have loved to see what Bradshaw might have done with the Marvel universe.

I was able to make it through the book despite the deficiency of the art, however. As depressing as it is to put down in writing, I’ve actually gotten accustomed to reading comic scripts illustrated so poorly that I have to sort of mentally edit and re-imagine the art in my head to make some sense of them. (Thanks Ed Benes, Tony Daniel and Larocca!)

Perhaps because Robert Kirkman and Phillips used so much of the Marvel A-List in their Marvel Zombies comics, Layman got to work with some of the more interesting characters in the company’s catalogue, and it was a kick to see such unexpected characters show up in cameos (Zombie Power Pack! Zombie Runaways! Zombie Howard the Duck! Non-zombie Nextwave!) or even pivotal roles (Dazzler, in her original disco look, essentially co-stars for most of the adventure).

under the pen of a different artist—plenty of the scenarios still get through and manage to be amusing. 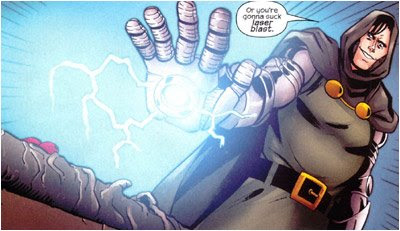 (Above: What appears to be an actual drawing)

I snickered at the effects of a chainsaw on a zombie Howard, and there’s a fun scene wherein Ash and his allies interrogate the talking evil books in Dr. Strange’s library for info on the Necronomicon (all of which have Necronomicon-like evil faces). And Phillips showed up in time to draw the last few pages, a punchline ending that puts in print a lot of readers’ half-serious consideration of what might be the next “Marvel Zombies.” (Peter David is guessing Marvel Mummies and Marvel seems to be betting on Marvel Apes, but I’m telling you guys—Marvel Hobos). 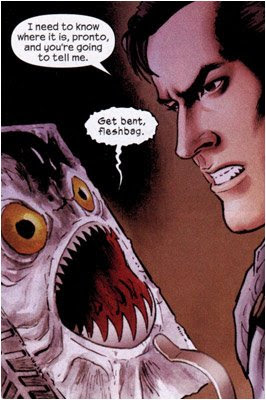 The hardcover ends with a section featuring eight of Arthur Suydam’s covers for the five-issue series, each of which is a zombified version of a classic Marvel cover. I was kinda disappointed in the way they all kind of just shoe-horn Ash into them, generally just lurking around in the background rather than replacing a figure in the original covers.


Would I travel back in time to buy it off the shelf?: Nah. The art and story pretty much just cancel each other out as far as I’m concerned. As long as there wasn’t any money involved, I didn’t mind reading it, but it wasn’t anything I felt was worth paying for the privilege to have read.


Anything else? I thought it was interesting that the cover credits say “Layman, Neves, Suydam,” which says a lot about how integral Suydam is to the Marvel Zombies books, as he essentially gets co-billing with the writer and the primary artist.
Posted by Caleb at 6:08 PM

The MZ/AoD covers in Army of Darkness (with the exception of the Ash Vs Spider-Man cover) were reprinted in Marvel Zombies: The Covers and Ash was clearly photoshopped in and out. It's sort of embarrassing.