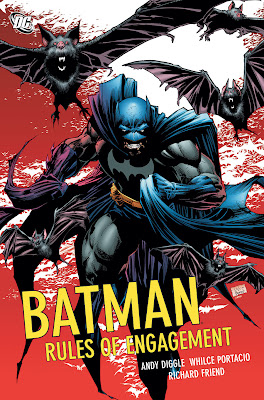 BATMAN: RULES OF ENGAGEMENT TP Written by Andy Diggle. Art and cover by Whilce Portacio & Richard Friend. Now in trade paperback! Writer Andy Diggle (THE LOSERS) joins forces with artists Whilce Portacio and Richard Friend (WETWORKS) in this volume collecting the first six issues of BATMAN CONFIDENTIAL, looking at how Batman developed his arsenal in the war on crime.

Emboldened by their $1 batillion opening weekend, DC now believes they can feel free to go ahead and publish anything with the word “Batman” in the title. Even some of the worst Batman comics ever. 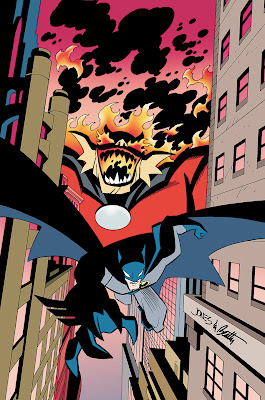 I’ve steered clear of this title so far—I think the only issue I’ve read is the all-girl one—but I’m curious about how Etrigan will look and act in the Batman Strikes!-iverse.

Has he appeared on the cartoon series on which this comic is based (and which I’ve also managed to not see very much of)?


CHECKMATE #31 Written by Bruce Jones. Art and cover by Manuel Garcia. All the pieces on the Checkmate board have converged on China. Is it the end of the world as we know it in this series finale issue? Or will Chimera save the day? On sale October 29. 32 pg, FC, $2.99 US FINAL ISSUE

Well that didn’t take long at all.

I was actually kind of surprised they went ahead and kept publishing the book after Greg Rucka’s final departure. It seemed to be hovering around cancellation levels when he was involved, so I’m not sure what they hoped would happen when they put a much less popular writer on the book. 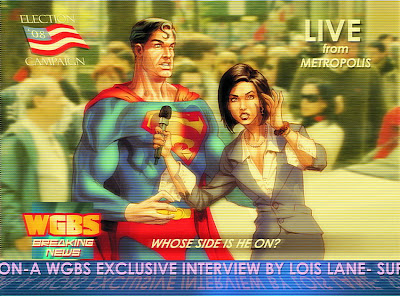 DC UNIVERSE: DECISIONS #3-4 Written by Judd Winick & Bill Willingham. Art on issue #3 by Rick Leonardi; art on issue #4 by Howard Porter. Covers by Stephane Roux. The DCU's biggest heroes hunt the villain planning to assassinate the presidential candidates, but they have plenty to distract them from their mission! Some heroes have begun openly endorsing candidates, and the ensuing media frenzy forces everyone to consider what, exactly, it means for a Super Hero to take sides politically. The killer must be caught, the cameras must be faced, and everyone – even Superman – must decide where they stand.

Superman can’t vote, jackasses. He lives in a crystal fortress in the Arctic circle, well outside the continental United States (and the civilized world).

Now, I guess Clark Kent could vote if he wanted, but why would the news media think Superman might secretly walk among them as a U.S. citizen? Unless it’s his fellow superheroes who are pressuring him to “take a stand,” contrary to what the solicitation copy and image seems to imply. 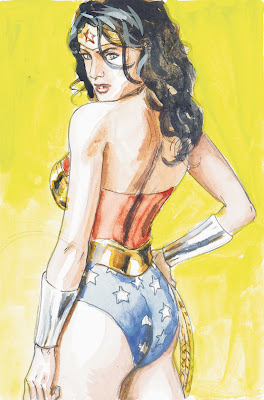 Uh-oh, they’re so far behind on Final Crisis that this is all they got for the cover preview? A color sketch? Yikes!

Also, the existence of covers like this showing off Wonder Woman’s butt is precisely why this cover 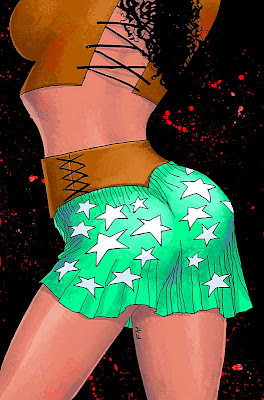 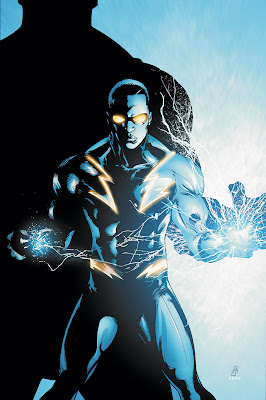 Hey, they let Jefferson Pierce has his hair back! 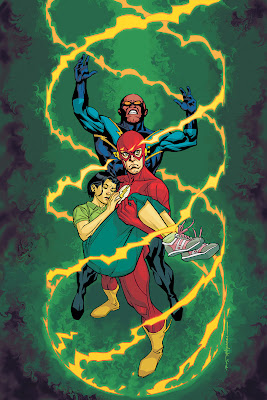 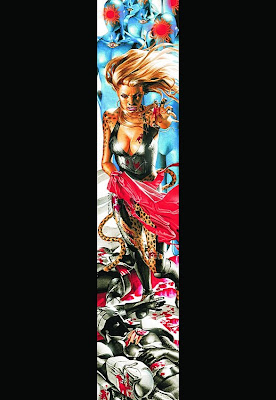 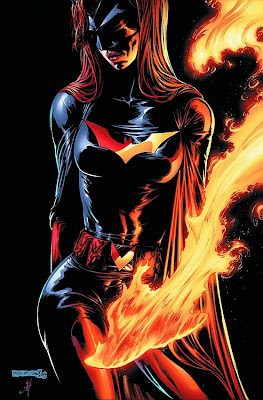 And speaking of visual metaphors, not only does this cover feature a hot, masked, fetish suit-wearing, buxom lipstick lesbian, but she appears to have a flaming crotch. 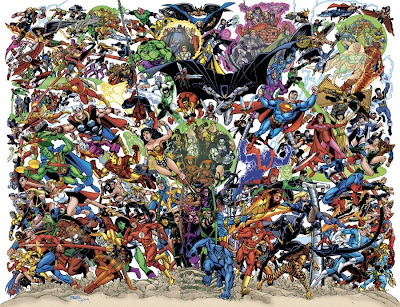 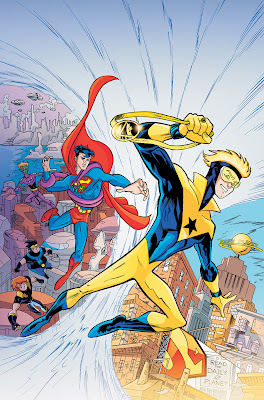 LEGION OF SUPER-HEROES IN THE 31ST CENTURY #19 Written by J. Torres. Art and cover by Alexander Serra & John Stanisci. Heroes sometimes face the dilemma of choosing when to break rules in order to serve the greater good. That predicament is truly encountered when the Legion meet Booster Gold. But is he crossing the line or simply fulfilling his destiny 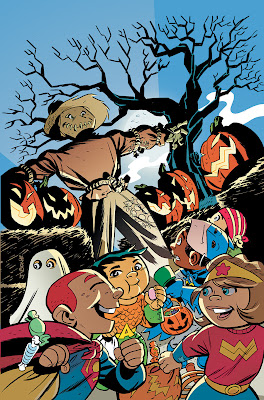 SUPER FRIENDS #8 Written by Sholly Fisch. Art by Stewart McKenny and Phil Moy. Cover by J. Bone. It's Halloween, and the Scarecrow is on the prowl! But nothing can scare the Super Friends

The Scarecrow? Okay, fine—I’ll break down and try an issue of this not-very-good looking series, but only because I totally love that guy. 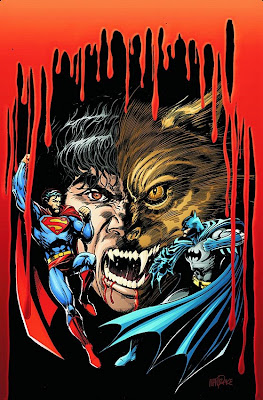 SUPERMAN AND BATMAN VS. VAMPIRES AND WEREWOLVES #1-2
Written by Kevin VanHook
Art and cover by Tom Mandrake
A man is killed by a mysterious creature – his body drained of blood. A woman is savagely attacked by a ferocious beast – her jugular ripped out. Bat wings flutter across the moon and the howl of a wolf echoes through the streets, for the creatures of the night have risen from the grave, and humanity’s only salvation is the combined might of The Last Son of Krypton and The Dark Knight Detective. Blood will run red when Superman and Batman face off against vampires and werewolves for the fate of the entire DCU!

This is probably one of the stupidest titles for a comic book I can remember coming across.

It evokes the Superman/Batman vs. Aliens and Predator series , although “Vampires and Werewolves” are pretty generic compared to the name-brand monsters Aliens and Predator. And SBvAnP was incredibly, surprisingly bad. I wouldn’t think that Mark Schulz had such a bad comic in him, but he sure proved me wrong with that story.

Still, Tom Mandrake art. That guy is a hell of a superhero artist and a hell of a horror/monster artist, so this subject matter should be right up his aesthetic alley. 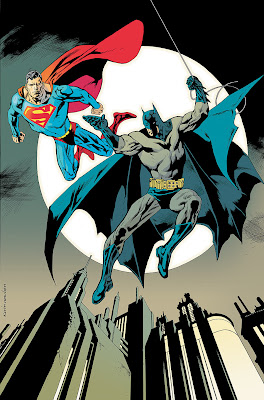 SUPERMAN/BATMAN #53 Written by Michael Green & Mike Johnson. Art by Rags Morales & John Dell. Cover by Kevin Nowlan. Superman's powers leap into the body of The Dark Knight! Now Batman contains the incredible abilities of a Kryptonian while the Man of Steel stands powerless. How will they adjust physically and psychologically to these bizarre changes? Part 1 of the 4-part "Super/Bat," featuring art by Rags Morales (IDENTITY CRISIS).

This has been done to death already—1993 Elseworlds one-shot Superman: Speeding Bullets and 1999 special JLA: Foreign Bodies leap most immediately to mind—but Morales art is always hard to resist. Especially when you’ve got Kevin Nowlan covers sweetening the deal. 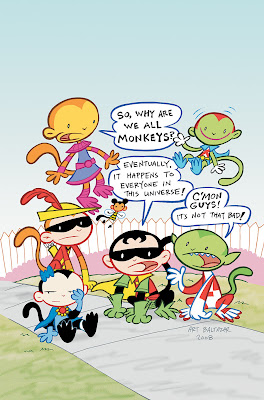 Jesus, just when I thought this title couldn’t possible get any cuter... 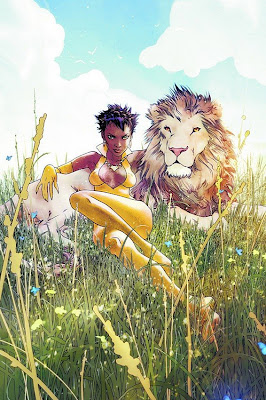 VIXEN: RETURN OF THE LION #1 Written by G. Willow Wilson. Art by Cafu. Cover by Josh Middleton. On a mission against the mega-mobsters of Intergang, the Justice League makes a stunning discovery revealing the truth behind the death of Vixen’s mother. Long ago, poachers were fingered in her murder, but stunning proof arrives exposing the identity of her real killer! And the man responsible is still alive, making a vicious play for power in the homeland Vixen left years ago.This groundbreaking 5-issue miniseries by rising stars G. Willow Wilson (OUTSIDERS: AQUAMAN/METAMORPHO, CAIRO, AIR) and Cafu (Black Panther) plunges the League’s animal-powered warrior into a deeply spiritual, but instantly deadly, quest for vengeance – and draws the League itself into the newest chapter of Intergang’s ever-expanding race for domination.

That Outsiders special Wilson wrote was really, really good considering that it was a Metamorpho/Aquaman II team-up setting up Tony Bedard's run on a series that he never actually got to take over for some reason. Also, her Cairo was a pretty solid super-story. So I’m actually kinda looking forward to this, although what exactly makes the solicitation writer think it will be "groundbreaking?"
Posted by Caleb at 6:24 PM

Re: Batwoman and her flaming crotch - all I can add is that I'm glad to see they got rid of the Batgirl belt buckle; I never did understand how they slap the Batman Beyond bat on her boobs (say that three times!), but give her Babs' old bat-shaped belt buckle (say that four times!)...

And how many times has such an image appeared on a cover?

And how many times has such an image appeared on a cover?

Oh I don't think it's a great representative image of the current DCU because it occurs so often--this is the only blood-spattered boobs cover I can think of, actually--but simply because it crystallizes the use of both violence and sex to give a maure veneer to their superhero stories.

Like, the New Teen Titans fighting Trigon is still just a Titans vs. Trigon story, whether it's preceded by a few pages of nekkid Starfire or not. And just becuase Superboy-Prime is ripping off arms and slapping off heads, it doesn't make a Superboy vs. The Titans story any more mature than a standard Wouldn't it be cool if Superboy fough, like, all of the Titans at once? story.

If that makes sense.

Wouldn't it be cool if nekkid Starfire fought, like, Batwoman's flaming crotch?