Bone and Beyond and Before Bone: The show catalogues

(Note: Apparently, one of these catalogs is now completely sold out. That’ll teach me to dilly-dally with my posts, which makes part of this somewhat less than timely. On the plus side, I may actually have a comic book that will be worth some money some day! Anyway, this is the review of the catalogs for the Jeff Smith shows I wrote up a couple weeks ago, expecting it to run at a site with higher traffic than EDILW, but apparently they weren’t interested, so I’m posting it here. Hopefully the info on the latter catalog will at least be of interest to some of those who haven’t seen it, even if now they can’t order one of their own)


The show is definitely something to see. Curated by Dave Filipi of Ohio State University’s Wexner Center for the Arts and Lucy Shelton Caswell of the OSU Cartoon Research Library, Jeff Smith: Bone and Beyond features 80 original pieces. Most of these are from Smith’s signature work, but there are also example of his original art from Shazam!: The Monster Society of Evil and RASL, plus a dozen piece of original art from Smith’s influences Charles Schulz, Carl Barks, Walt Kelly Will Eisner, E.C. Segar, George Herriman and Garry Trudeau (“Look at the dragon’s eyes,” Smith instructed an audience gathered to hear him speak about Bone when the subject of Trudeau came up).

It’s the presentation that went into it that makes it seem more special than your average gallery show of comics art, however. The Wexner Center gave over a wall near their entrance to a huge, full-color mural depicting Grandma, Rose and the Bone cousins sneaking along a rooftop. In the exhibit area itself, an entire wall is given over to a reproduction of a single panel from Bone, giving the viewers the impression of being inside a giant comics page. 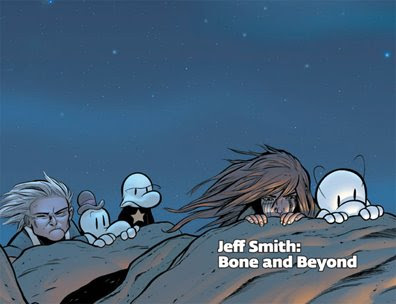 (Above: The cover for the show catalogue)

While those within reasonable driving distance have been treated to a pretty extraordinary show, if you can’t come to the itself, the Wexner Center and Cartoon Research Library can always bring the show to you, with their Jeff Smith: Bone and Beyond catalog, a gorgeous twelve-by-nine-inch, 85-page hardcover book reproducing all of the art for the show.

The images are supplemented by an introduction by Caswell, in which she describes the process of going through Bone with sticky notes marking the images they felt hey had to include, and some of the difficulties in replicating the comics reading experience in a gallery show (They ultimately did so by including the original art for one entire issue) and a 21-page interview with Smith conducted by Caswell and Filipi.

Also included is a three-page essay by Neil Gaiman, which begins with the reprinting of his introduction to an old collection of Bone in which he compares Smith’s work to Herman Melville’s Moby Dick, before plunging into fresher analysis: “There. That’s what I thought when I wrote that fourteen years ago. I’m happy to say that there’s nothing in there that, with the benefit of hindsight, I’d want to retract or amend.”

And that’s followed by an essay from cartoonist and comics theorist Scott McCloud, who says he and Smith are of the same “time and place, as well as profession.”

Perhaps the most scholarly bit in the catalogue comes from Filipi, who offers a closer comparison between Bark’s duck comics and Smith’s Bone, a comparison he feels “is both appropriate and overdue.”

Bone and Beyond isn’t the only Smith and Bone-related gallery exhibit hanging at Ohio State University this summer, however, nor is its catalogue the only interesting book about Smith and Bone the institution has published.

Smaller in scope and scale, but perhaps even more interesting to Bone fans, is Jeff Smith: Before Bone, a show hosted at the Cartoon Research Library featuring the pre-Bone version of Bone, Thorn, which ran in the school’s newspaper The Lantern in the early ‘80s.

The work is, simply put, weird. It’s clearly Bone, with almost all of the characters appearing, and plot lines and specific scenes familiar from the comic book version already present, and yet Smith’s art, while head and shoulders above what one might expect from your average college newspaper strip, is still nowhere near as accomplished as it would become.

Thorn was more or less a serial adventure strip, of the kind newspapers host less and less of, although it would sometimes break off into one-off gags and side stories. Here the Doonesbury influence is easier to see, both in the structure and the staging (as well as the dragon’s Zonker-like eyes).

College kid Smith himself would occasionally appear within the strip to help out his characters, and he and they would interact with the OSU campus (school mascot Brutus Buckeye appears in one strip).

In one sequence, Smith, with sideburns, a goatee and knit cap and scarf, tries to help them fight off rat creatures; in another, Fone and Phoney get jobs in the real world outside the strip to help make ends meet.

Politics were addressed in an odd, un-Bone-ian, Pogo-like way, with Phoney Bone teaming up with a Jerry Falwell-like clown named Barely A. Foulword in a scam called Life After Death, Inc., and a Ronald Reagan-like politician character named Ronny Doodie appearing in a few strips.

This is the first time anyone’s collected Smith’s Thorn, and while it’s easy to see why Smith himself hasn’t done so, it’s certainly fascinating to see where Bone evolved from, particularly considering where it ended up.

The catalogue, sharing the name Jeff Smith: Before Bone, isn’t quite the lush production that the other catalogue is, but its contents are well worth seeking out. It’s a ten-by-eight-and-a-half, 54-page trade paperback book, featuring two strips per page.

Also included are an introduction by Smith (“When I flip through these old college comic strips, what I see are clumsy attempts to manipulate a dip pen, and sophomoric jokes. Of course, I was a sophomore, so maybe I shouldn’t be so hard on myself…And don’t worry, I get better”); a piece by his lifelong friend Jim Kammerud, who lived and worked with Smith back in his OSU days; and another piece by Caswell, who first met Smith back in those days as well, and has had an advantage of watching him grow up as an artist through eyes attuned to cartoon history.

Related: Some images of the catalogues, which were so nice I didn’t want to risk bending by scanning, can be seen here.
Posted by Caleb at 7:09 PM