The Other Secret Invasion: Millennium #4 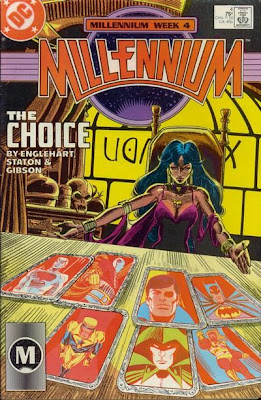 The fourth issue of Millennium, helpfully entitled “Forth,” begins with a grim Batman hiding in the bushes outside The Green Lantern Citadel (i.e. Hal Jordan’s condo), frowning at the gathering there and thinking, “I don’t like it”: 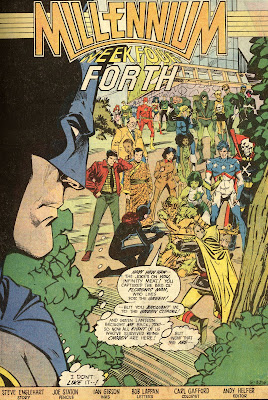 Coincidentally, lurking in the bushes, frowning at the rest of the gathering and thinking, “I don’t like it” is the exact same thing I do at all outdoor parties.

Writer Steve Englehart quickly catches us up on what’s been going on in the manyMillenium tie-ins of the previous week, none of which I have read or re-read. We learn that eight of the Immortals’ chosen people have survived—including supervillain/plant man Floronic Man—and they’ve all been brought to Hal’s swinging bachelor pad for a garden party to get to know one another better.

This is accomplished via the GL rings, which translate everyone’s native language into English (Although can’t seem to do anything about Celia Windward’s Chris Claremont-ian accent).

Of the chosen, Giorgio continues to be the only one who seems at all interesting to read about: 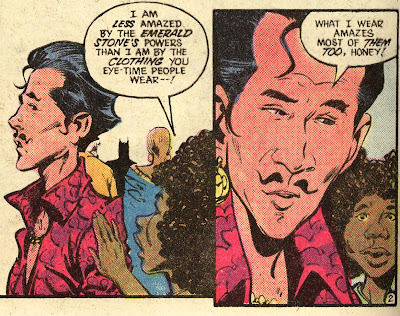 Unless you count the fat, racist white South African guy. His racism is refreshingly blatant. I mean, it takes some courage to dis a bunch of lunatics, mongrels and degenerates right to their faces, especially when some of ‘em have superpowers: 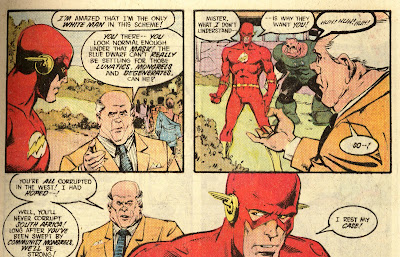 Batman, meanwhile, isn’t just brooding, he’s also helping catch us up on what’s transpired in the crossover so far, until he’s hit by inspiration: 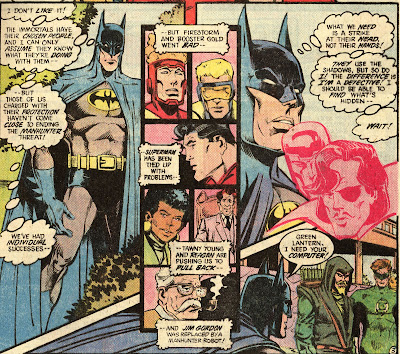 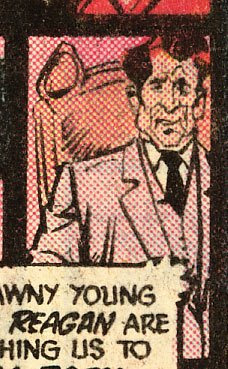 As lame as it can sometimes be when super-comics try to pretend their stories exist in the really-real real world, I'm occassionally glad they do, if only because it gives us such visual treats as Ian Gibson's vaguely Lincoln-ian Ronald Reagan.

But back Batman, he double-checks something on his Bat-computer, then hops on a STAR Labs ship headed for the swamps south of Houma, which is where “the cult of the Manhunter congregates, like ‘gators on a bloated dog!"

There, The Manunters are in the process of recruiting Booster Gold to their cause, by making a deal with the one man whose collar is as big and pointy as Booster’s:

Meanwhile, the immortals give the eight chosen ones (their chosen eight?) one last chance to back out before commencing with their never really all that clearly explained plan to push humanity forward into the next millennium.

Each answer in the affirmative. Grigorio, whom, don’t forget, is gay and therefore not terribly likely to breed with a woman at any point in the near future, says, “Well, dears, I never thought I’d do anything to advance evolution--"

Immortal Guardian Herupa Hando Hu then invites them all within the citadel to begin their “instruction in matters cosmic.”

I love the weary look on J’onn’s face as he replies, like he’s already said this like sixteen times.

Back in the swamps, pot-bellied Warden Economos is getting ready to send the Suicide Squad out into action against the Manhunters. 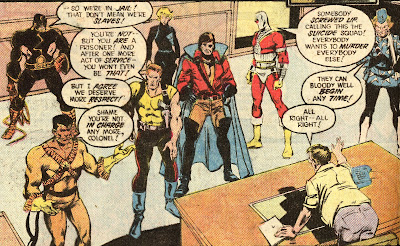 You’ll note among their number here is Gay Pirate Manhunter Mark Shaw, also known as the The Privateer. This doesn’t sit well with Captain Boomerang, who thinks he’s a “bloody droob!” who will likely betray them all.

Bloody droob or not, it was Shaw that Batman was hoping to meet in the swamps, of course, but he’s apparently just missed him.

Economos lies to Batman, telling him that Shaw was released for time served two weeks ago. But Batman doesn’t buy it, being the world’s greatest detective and all.

In New York City, we meet up with cover girl Madame Xanadu, who just got her own Vertigo series because Vertigo just can’t seem to get past the fact that the first group of obscure DC superheroes who were turned into Vertigo series were such a hit, that all they have to do is keep repeating that formula and there will eventually be another Swamp Thing or Sandman, despite the relative failures of every attempt that followed, most recently and most spectacularly Beware The Creeper and Deadman (Did you recognize that last sentence as a run-on sentence? Congratulations! You may have a future in copy editing; more of a future than I have in writing).

Now this was back when Madame Xanadu was sharing office space with Jim “The Spectre” Corrigan.

A bearded Manhunter operative comes in to have his cards read by Xanadu, and when she turns to show him a Manhunter mask she acquired for her collection of occult curiosities, he clobbers her, puts on the mask and then heads upstairs to ransack Corrigan’s office, looking for info on The Spectre.

When Corrigan returns, the Manhunter acolyte escapes, and then The Spectre appears to conduct a séance involving Corrigan, Xanadu and Kim. 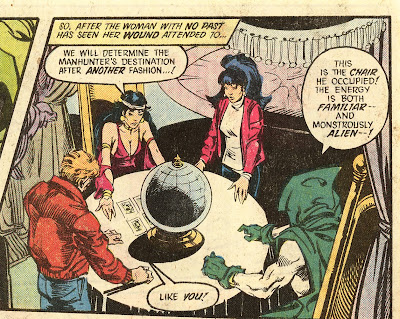 By placing one hand on the cards and the other on the globe, The Spectre is able to pinpoint the location of the Manhunters—Louisiana which, um, we already knew.

But now Corrigan knows too, and he’s headed there, giving us another of those swell last pages where we see multiple story threads all headed in the same direction: 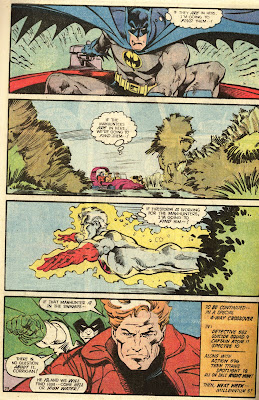 And if you ever wondered what Batman’s motor-boating face looks like, wonder no more: 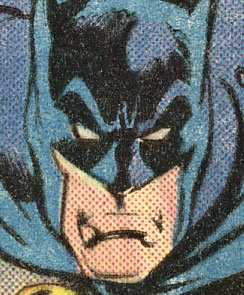 And that's it for Millennium #4! Be here the week after Secret Invasion #5 comes out for the pulse-pounding fifth issue of Milleenium, in which the chosen ones get a lecture on the nature of the universe by The Immortals. No, I'm not making that up! Actual comic book lecturing! In just twenty-some short days!

I can't help it. I know that this is almost universally reviled, but when it comes out in trade, I am GETTING IT!

Quite frankly, it looks hilarious. Batman lurking outside of Hal's place, moping because he wasn't invited, Giorgio, who is simply fabulous, Booster being venal, J'onn being world-weary, the Guardians being idiots...what more could you ask for?

It's not altogether BAD, exactly. The payoff is, though.

But that's the way of many crossovers.

Still... more happened in this single issue than in all of Secret Invasion to date.

I'm digging this look back. I agree with someone else who said this was the best crossover in terms of cohesiveness. In pretty much every other aspect, though, very lousy.