This is Not A Graphic Novel: Time To Pee!

I've mentioned before what a fan I am of the work of artist Mo Willems, whose pigeon and elephant and piggie books are all pretty great. Over the last few months I've been tracking down as many of his children's books as I could through my local libraries (all of which are nicely illustrated, even if none seem to be as all-around brilliant as Don't Let the Pigeon Drive the Bus! and the elephant and piggie line).

I'm pretty sure I've read them all at this point, since I've even read the one that was shelved in the "toilet training" area of the parenting section of the children's department: 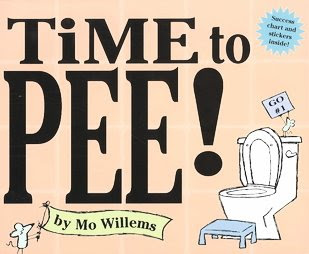 That would be Time To Pee! (Hyperion; 2003), in which a bunch of very clever mice talk a couple of children through how to pee in the toilet like big kids.

I like Willems' animals better than his people, but he's a pretty good person-drawer, too, and while the subject matter of this book isn't anything I'm particularly interested in (having long ago learned how to pee in the toilet like a big kid and not yet having any little ones in need of learning this important life lesson), I really appreciated some of the clever narrative techniques he uses here.

Each of the pages reveals a two-page spread (way too big for the scanner I use; each image stretches to double the length of these scans), and features one of several different children during various steps of the peeing process. This allows Willems to make the protagonist look like the reader, whether they're a boy or girl, pale-skinned or brown-skinned. The narration comes not from a narrator, but from the mice, who are full of different ways to hold up signs, and who are so numerous that in many pages they're engaged in many different activities, giving young readers (or read-to-ees) a lot to look at on every page.

Here are four pages; the first two formed one long image, the second two were relatively nearby them in the book: 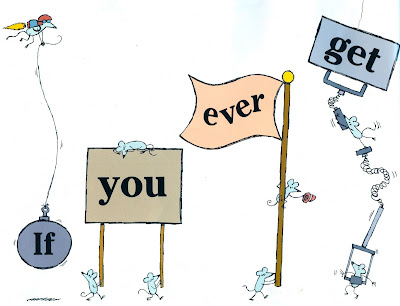 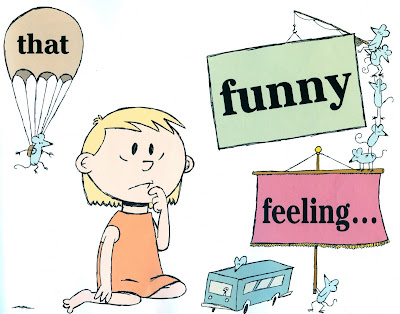 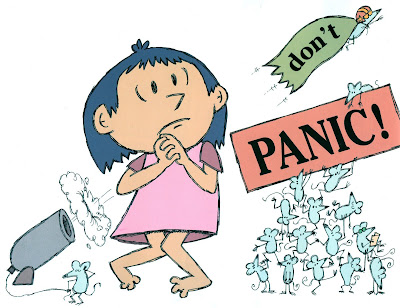 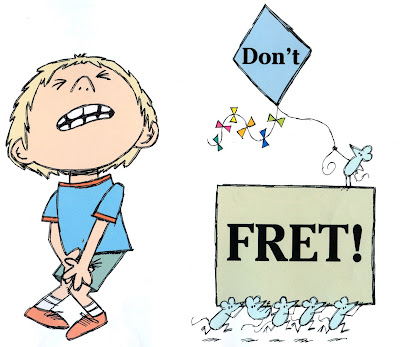 After assuring you that it's okay to get that feeling and it's nothing to freak out about, the mice instruct the kids to get up, excuse themselves, go to the bathroom, pull down their pants and either stand at or sit down on the toilet (depending on whether they're a boy or a girl) and then, aftwerwards, to wash their hands, and not worry about as they're all done peeing...for now!

Eventually, though, it dawned on me why these poor children might have some trouble making it to the bathroom to use the toilet, presumably instead opting to just go in their pants now and then. I mean, just look at the houses these kids live in. They are literally crawling with vermin, with the number of mice greatly intensifying around the toilet.

Look at what their bathroom looks like. Would you want to go anywhere near that toilet, let alone pull down your pants in front of it? 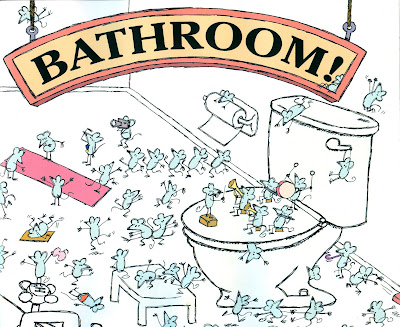 Hell, considering the number of mice running around their houses, if the worst thing wrong with these kids is that they occasionally go in their pants, I think they're doing pretty well developmentally, all things considered.

Fun fact: I think tonight may be the first time I've ever actually typed the word "pee."

Another fun fact: The title of this book is even funnier in Spanish.

One more fun fact: This book guest-stars the pigeon who isn't allowed to drive the bus; at least in toy form... 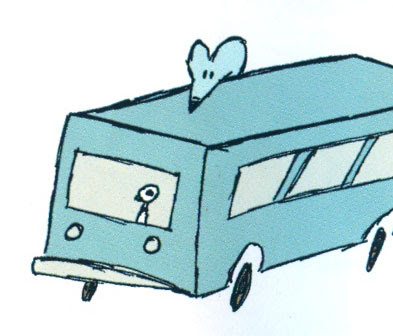 Man, I wish I had a toy bus with removable toy pigeon action figure...
Posted by Caleb at 5:02 PM

Labels: evidence that I am actually a grade-school child, mo willems, picture books