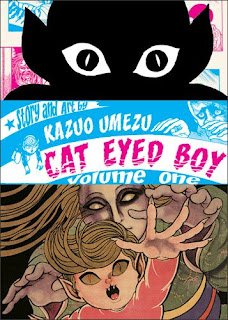 The package is a striking one. Weighing in at 500 pages, and with substantially larger pages than your average-sized Viz digest, the book has the heft of a small family bible.

Ronnie Casson is credited with the cover design, which features a totem pole of visual information; the titular character’s silhouette above a luridly colored logo above a vintage looking color image from the manga. It’s some nice eye candy, and if my eyes had mouths they would totally devour this cover.

The inside front and back covers are one-color drawings of the inside of a Japanese, multi-story house, full of the various monsters that appear in the story, providing a sort of key or legend to the weird-ass characters within.

As for the stories, they are five in number, and they are only loosely connected. Cat-Eyed Boy is a character within the stories, but he’s not always the main one, and he tends to function somewhere between a Crypt Keeper/Cain horror host type of character and an active participant. 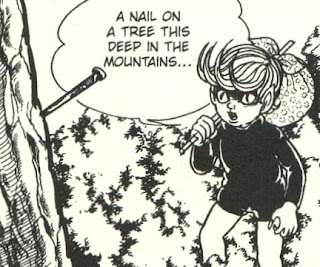 Visually, he’s an inspired creation. In addition to the feature he’s named after, he has claws where his nails should be, pointy elf-like ears, and sharp teeth, and he often bounds about on all fours like a cat. Dressed in shorts, he resembles nothing so much as a demonic school boy, and he wanders about with a bindle over his shoulder (making him a hobo demonic school boy), attracted to terror hotspots.

Sometimes he merely lurks in the attic, peering down at the scary story unfolding in the house below (as in the volume’s opening story, “The Immortal Man”) or he finds himself a victim of the main characters (As in “The Ugly Demon”).

After these first few stories, Cat-Eyed Boy begins to play a larger and larger role, starting with his “origin story,” “The Tsunami Summoners,” in which all of the goblins in the world gather to see the once-every-300-year birth of a cat demon…one which is tragically human-like in appearance.

He plays a fairly pivotal role in “The One-Legged Demon of Oudai,” about a cursed nail and a cruel little boy who enjoys killing insects, and the first half of “The Band of 100 Monsters,” which ends on a cliffhanger to be continued in Volume 2.

The loosely-connected anthology format suits Umezu’s skills quite well, and several of the stories cater to his abilities at horror design, as both “Band of 100 Monsters” and “Tsunami Summoners” involve hordes of inventively weird looking creatures, often something of a mix between traditional folk tale monsters and more modern contemporary horror creatures.

I’d highly recommend this book for fans of manga, horror, or manga horror. 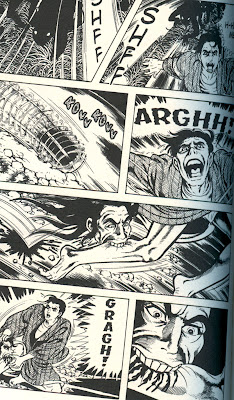 (Above: A horribly scanned image of one of my favorite pages from Cat-Eyed Boy, in which a man flees the moutaintop meeting of a band of goblins, and is chased down by a, um, well I guess it's just a head) 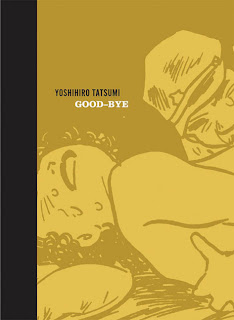 The third volume collecting Yoshihiro Tatsumi’s often dark and depressing literary short stories from the late ‘60s and early ‘70s (following The Push Man and Other Stories and Abandon the Old in Tokyo), has fewer shocking stories—at least, fewer that featured the sorts of fucked-up moments that apparently appeared like grisly traffic accidents in the previous ones (the sex with the dog, the rat who might have been impregnated with the man’s wasted semen, the dead babies in the sewer, the sex slave under the blankets).

Not that the Tatsumi’s tales are any less powerful, however. He’s still exploring humanity faced with extreme, existential crises, whether they seem tame and personal (like a salaryman facing the irrelevance of retirement, the unbearable loneliness of a bachelor, or the revulsion of a boy who finds one of his peers experimenting with transvestism), or the fallout of global acts (like what became of some after the end of World War II, or how the atom bomb changed the world—and failed to change some basic, base behavior).

This was probably my favorite of the three volumes, although I’m not entirely sure why. Perhaps it has something to do with the (relative) lack of shock, and thus slightly more relatable circumstances, or the balance between the types of stories—some are operatic in their melodrama, but wonderfully, transparently constructed, while others unfold in a more organic pace, with unpredictable results.

I know it’s only July, but I’m pretty sure this is a book that will be appearing on my best of 2008 list in another six months or so.
Posted by Caleb at 6:13 PM