As always, the "Real Power" lies with the straight white folks 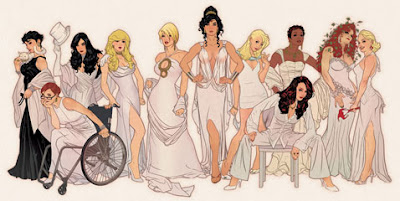 Remember this? The cool poster image Adam Hughes did for DC that he brought with him to April's New York Comic Con?

Well, DC finally got around to making some use of it (a few months after Johanna Draper Carlson and some of us have already had some fun with it), inserting it as some sort of badly-cropped house ad across two pages of many of their comics from the past week or two.

Unfortunately, for some reason they couldn't exactly figure out how to format it so that the entire image fit in the tennish-by-thirteenish inch space a double-page spread provides, and thus the result ended up like this: 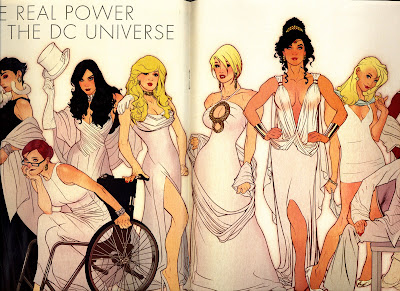 You'll note that they had to cut some people out. And who did they decide they could cut? 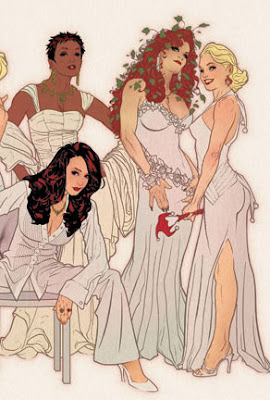 Why, the black woman, the lesbian and the two straight women with bi-curious gay crushes on each other.

Wow, thanks for pointing that out. Between that and the whole thing about DiDio originally not wanting Catwoman in the poster, and it's like geez people, wtf.

Pfft, they left in the cripple. Some people are *never* satisfied.

i like to think that dc just doesn't know how to scale things properly.

To be fair, Harley and Ivy are both mass murderers, which seems like a good reason to leave them out.

They've got such a great poster there. Why not show us the whole thing, instead of being lazy and lopping off the characters at the end to try and make it fit the page dimensions?

Yeah, I thought it was some kind of printing error, or it was going to be completed on the next page or something. Even if there wasn't any shady reasons behind why they did it, it was very odd just to cut some of the people in half.