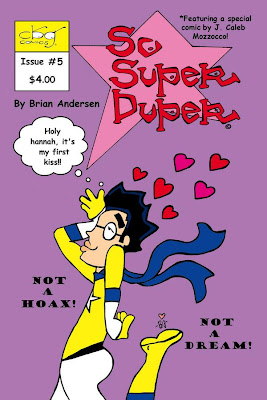 Do you enjoy the occasional comic strips you see here on Every Day Is Like Wednesday, despite the leaden "jokes," amateurish "art" and barely legible hand-written "lettering" that define them? Do you like them so much that you'd be willing to pay for one of them, despite the fact that you can usually get them here for free? Well good news! Now you can!

Comics creator, fellow "Best Shots" at Newsarama.com critic and EDILW reader Brian Andersen asked me to do a back-up strip for his next issue of So Super Duper, which will be So Super Duper #5.

If you're unfamiliar with Andersen's series, it centers on a superhero with empathic abilities who goes by the codename Psyche. He's a not-terribly-valued member of the super-team The Amazin'naughts, where he uses his empathic abilities to let the heavy-hitters know things like, say, that the giant monster that's destroying the city is evil.

Psyche's also a little on the, ummm...happy side, if you get my meaning. He's...well, how should I put this in a way that doesn't offend anyone...Oh, okay, how about this: When it comes to flaming, The Human Torch has nothing on Psyche.

At least, that's the impression Psyche gives. But is he really gay? The rest of his teammates seem to assume so, but he always seems surprised when someone implies that he is. And so superhero hilarity ensues.

You can check out previews of each of the previous issues at Sosuperduper.com, as well as find out how to order copies. My story will look and feel pretty familiar to regular EDILW readers, as it was done in the exact same way as the ones I post here—drawn with pencil and pen on index cards, colored with colored pencils, hand-lettered in my own terrible handwriting, and then handed off to Brian to try and figure out how to make it fit on paper. It's sort of a "crossover" between So Super Duper and Every Day Is Like Wednesday, in which comics blogger Caleb interviews for the Snapper Carr-like mascot position on the Amazin'naughts. 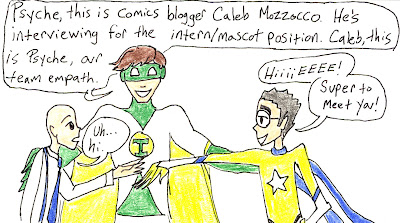 So go order a bunch of copies of all of Brian's comics, huh?

Well, you don't have to imagine 'em. You can follow the link to his site and read the previews. If you don't like his reviews, that's cool, but he does sign them and fess up to his opinions. I see now why some folks don't allow anonymous comments on their sites...

sosuperduper said...
This comment has been removed by the author.
11:45 AM

Hey "Anonymous"!
Thanks for your cheery and super nice comment! Everyone's entitled to their opinion, that's the great thing about living in America! I don't expect to please everyone and I don't claim to be the world's greatest reviewer either, but I do love to write and I hope to only get better and better at it the more I do it.
Have a fabulous day!
Brian

wow, anonymous.. how very BRAVE of you to say what you think with no name or anything to show who you are. Im all about saying what you think but grow a pair already. dillhole.